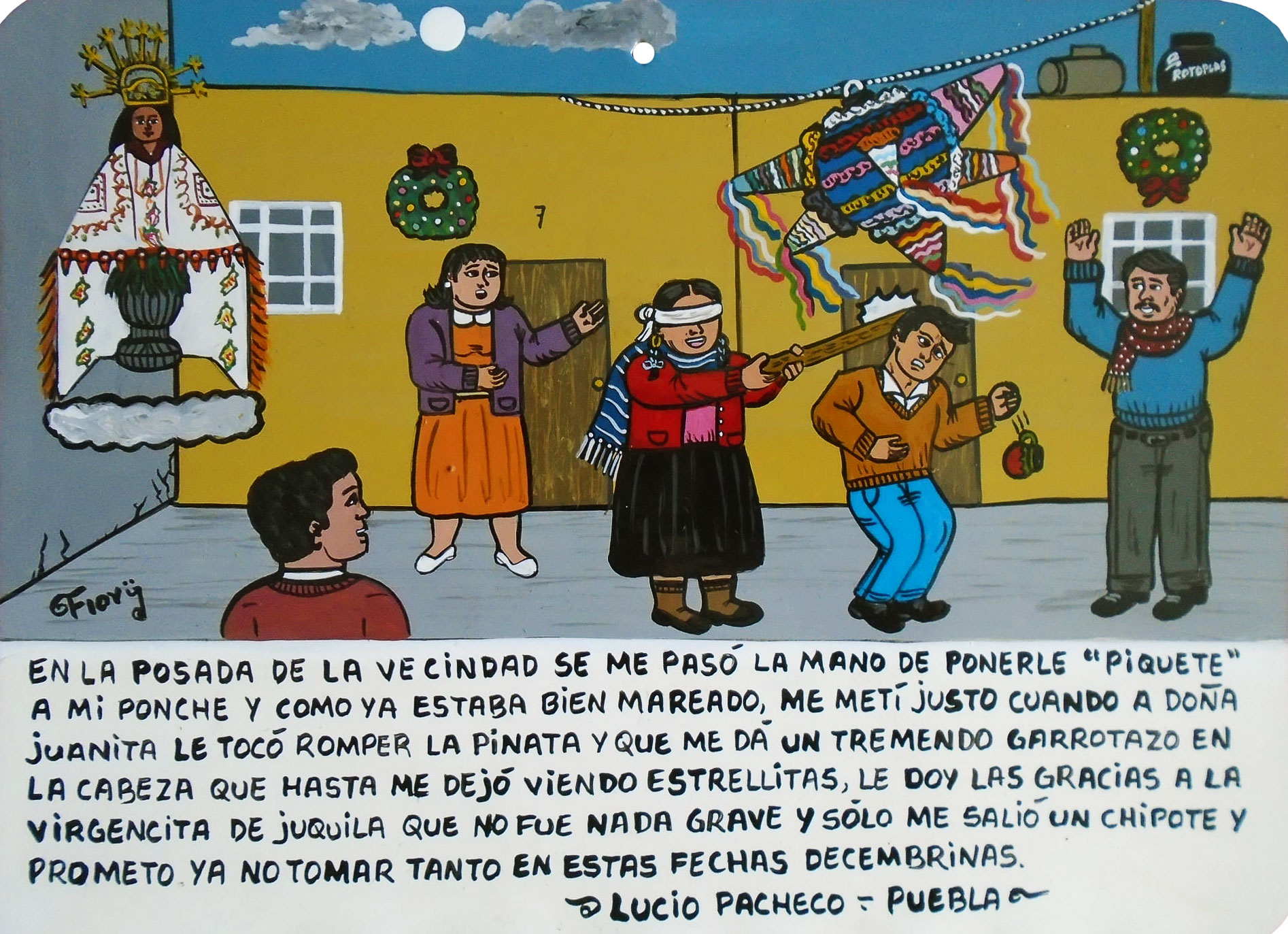 I put too much liquor in my punch at the Christmas party in my neighborhood. Since I was getting tipsy, I came where doña Juanita was about to hit the piñata and she gave me such a tremendous blow in the head that I even saw stars. I give thanks to the Virgin of Juquila because nothing serious happened and I only got a lump. I promise not to drink so much on these December holidays.

— tagged with Virgin of Juquila and Christmas and accident, celebration, drunkenness, injuries, party, piñata and Puebla — # 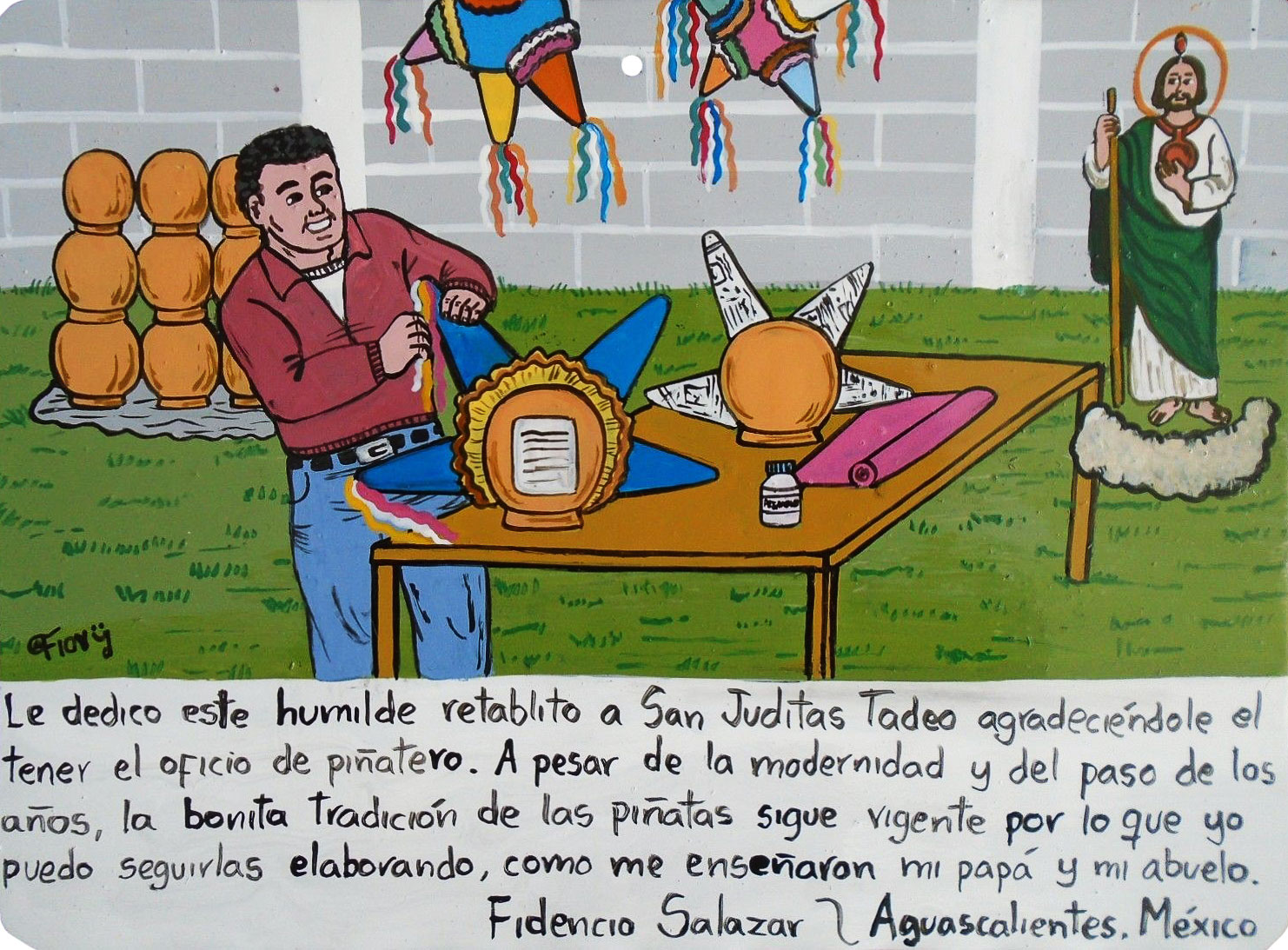 I dedicate this humble retablo to Saint Jude Thaddeus thanking him for having a job as a piñata maker. In spite of living in modern age and passing of time, this beautiful tradition of piñatas goes on and I can keep on making them as my father and grafter taught me.

— tagged with Saint Jude Thaddeus and piñata, traditions and Aguascalientes — #

Federica Herrerias received a tremendous blow at the back of her neck. She was badly injured and dazed. She couldn’t recover and that’s why she implored Saint Charbel. She got cured, and she gives infinite thanks for that with this retablo.

— tagged with Saint Charbel and accident, injuries, piñata and Puebla — # 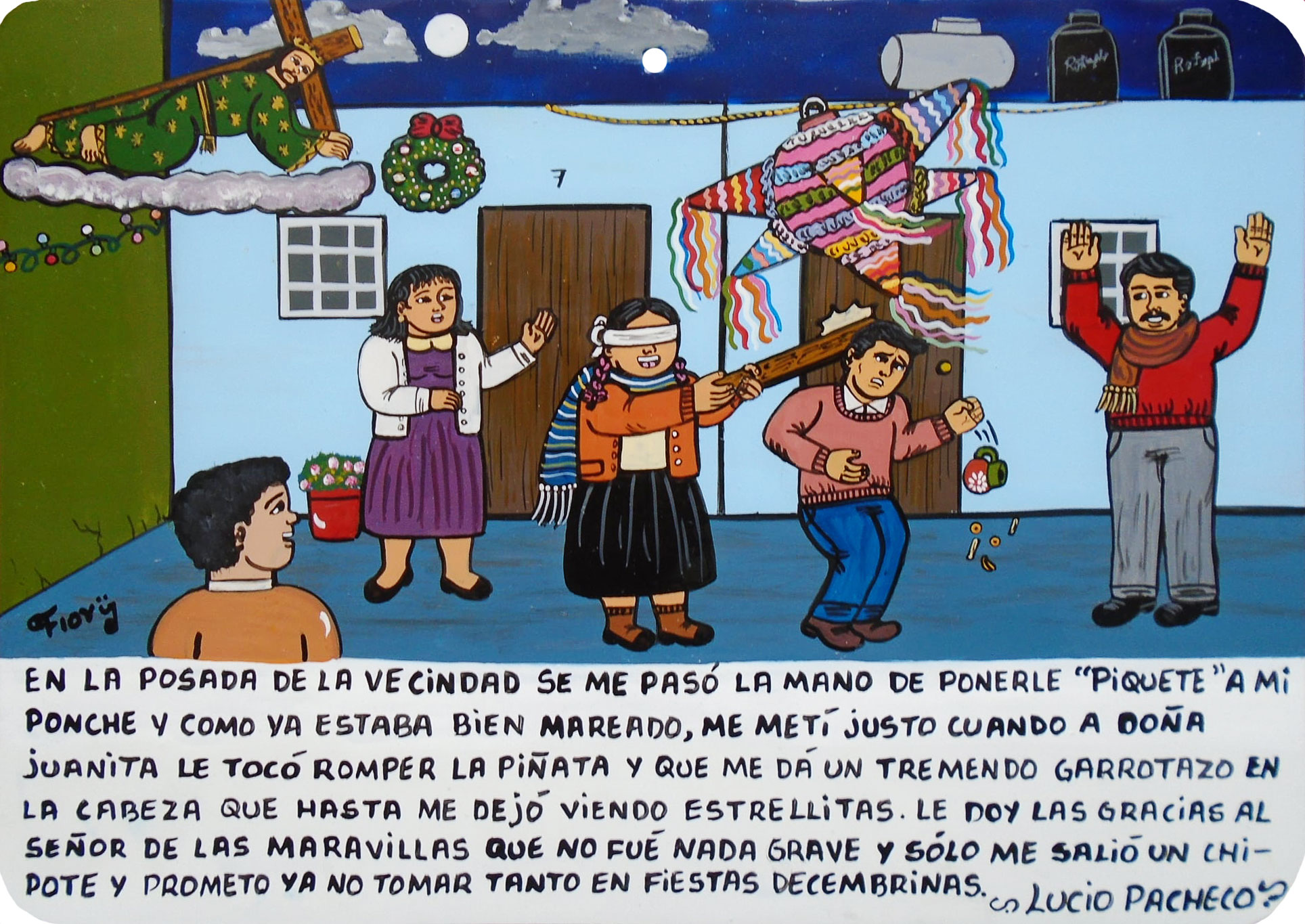 At the Christmas party in the neighborhood, I put too much liquor in my punch. Since I was getting tipsy, I came where doña Juanita was about to hit the piñata and she gave me such a tremendous kick in the head that I even saw stars. I give thanks to the Lord of the Wonders because nothing serious happened to me and I only got a lump. I promise not to drink so much on December holidays.

— tagged with Lord of the Wonders and Christmas and accident, celebration, drunkenness, injuries, party, piñata — # 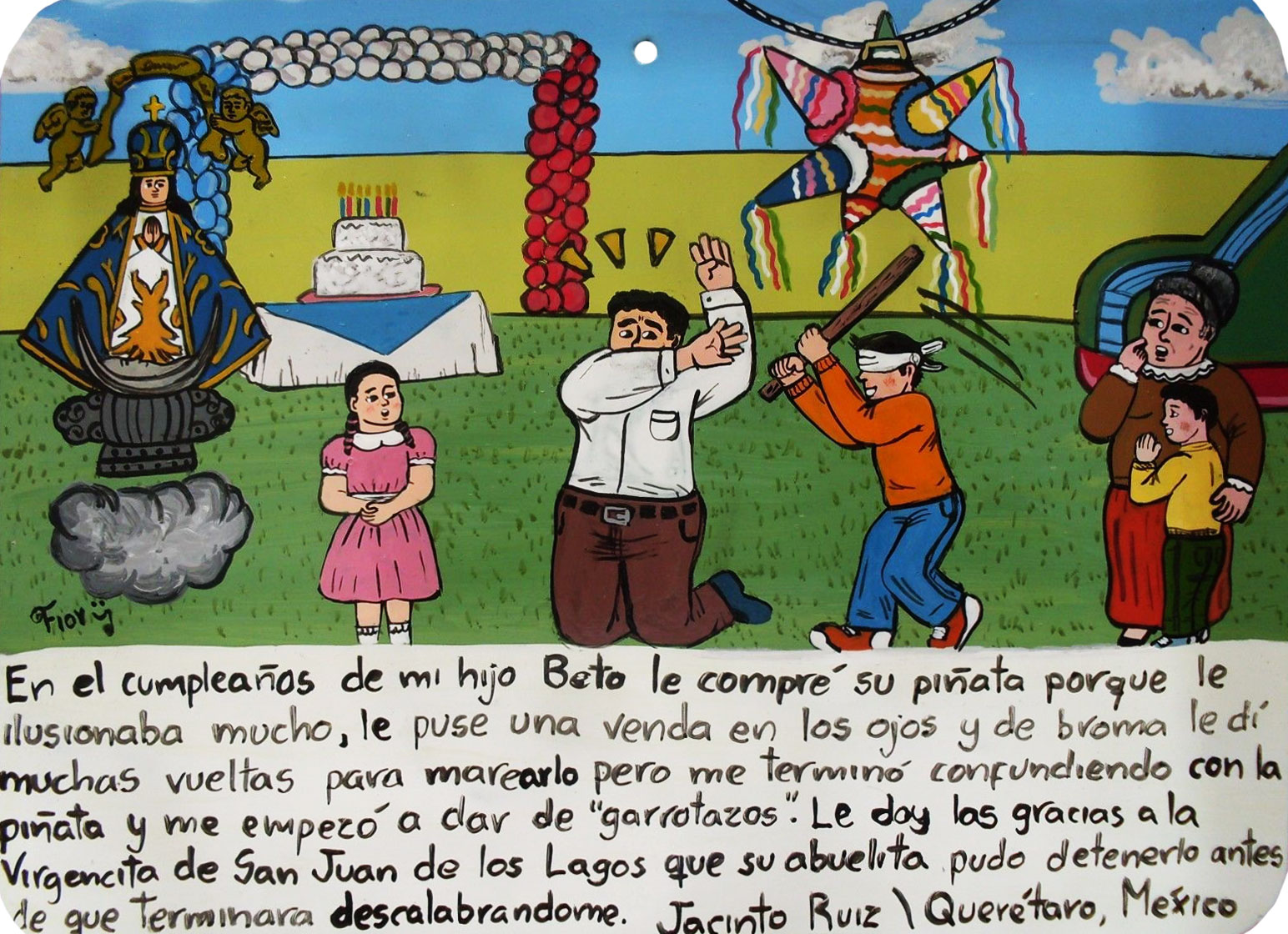 I bought a piñata for my son Beto’s birthday because he wanted it so much. I put a blindfold on his eyes and, as a joke, turned him around many times to make him dizzy. But he ended up confusing me with the piñata and began to beat me with a stick. I thank the Virgin of San Juan because his grandmother could stop him before he smashed me. 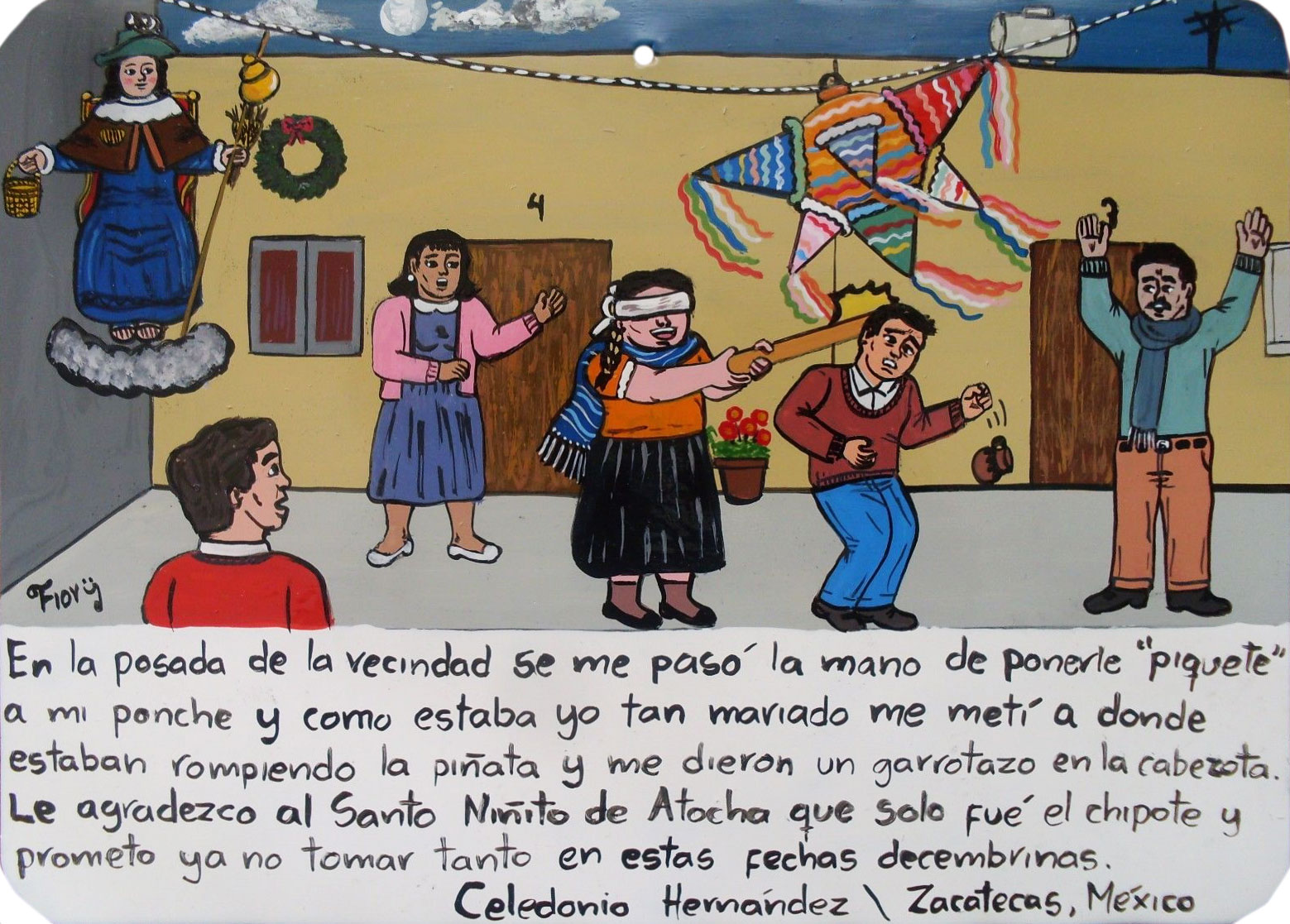 At the Christmas party in the neighborhood, I went to put some liquor in my punch. Since I was already tipsy I got into the piñata event and was kicked in the head. I give thanks to the Holy Child of Atocha because I got only the lump. I promise not to drink so much on December holidays.

— tagged with Child of Atocha and Christmas and accident, celebration, drunkenness, injuries, party, piñata and Zacatecas — # 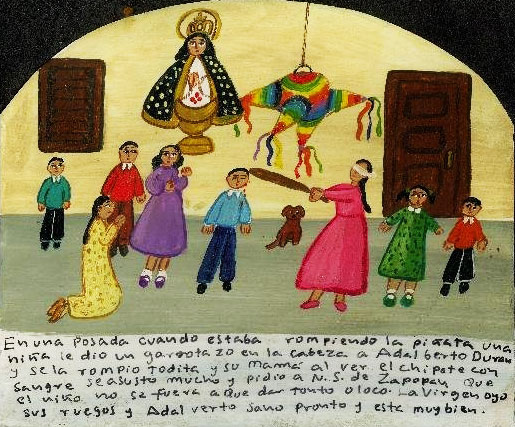 At a Christmas party, when one girl was about to break piñata but hit Adalberto Duran in the head instead. She smashed his face, and his mother was very scared seeing his son covered in blood. She prayed the Virgin of Zapopan so that her son wouldn’t became stupid after such a blow and wouldn’t lose his mind. The Virgin heard her prayers, and Adalberto got better very soon. He feels alright now.

— tagged with Virgin of Zapopan and Christmas and accident, celebration, children, injuries, piñata — # 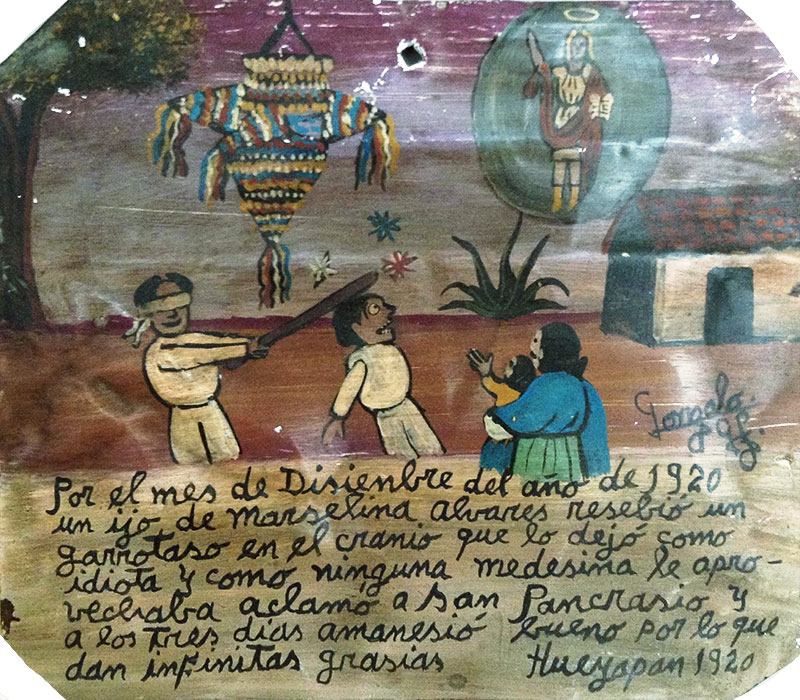 December 1920, a Marselina Alvares’ son was hit in the skull and became an idiot. Since no remedy could help him, she implored Saint Pancras. Three days later her son got better, and she’s infinitely thankful for that. 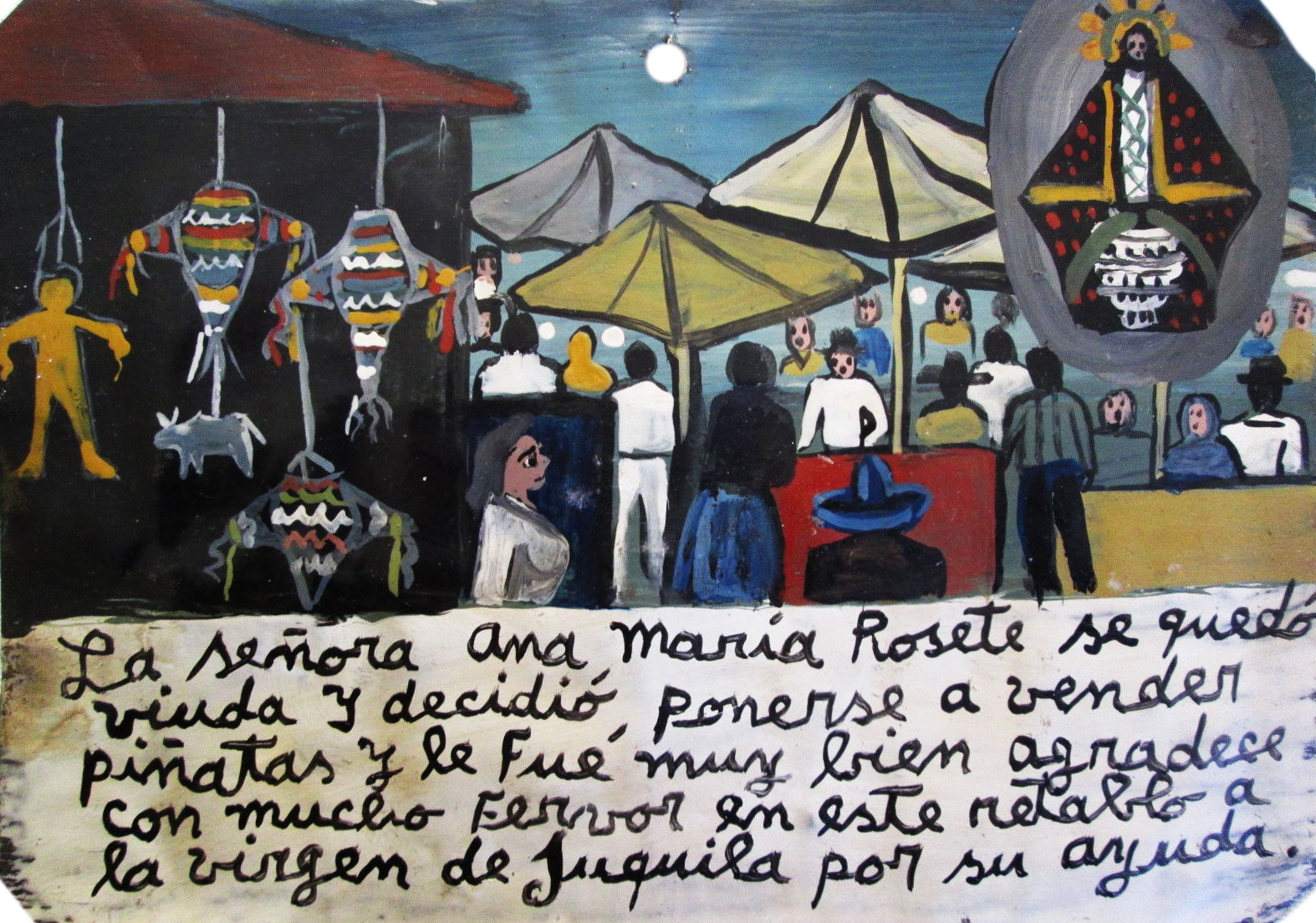 Ana Maria Rosete became a widow and decided to sell piñatas. The things went very well. She thanks the Virgin of Juquila for her help with this retablo.

— tagged with Virgin of Juquila and business, piñata, vendors, widowhood — # 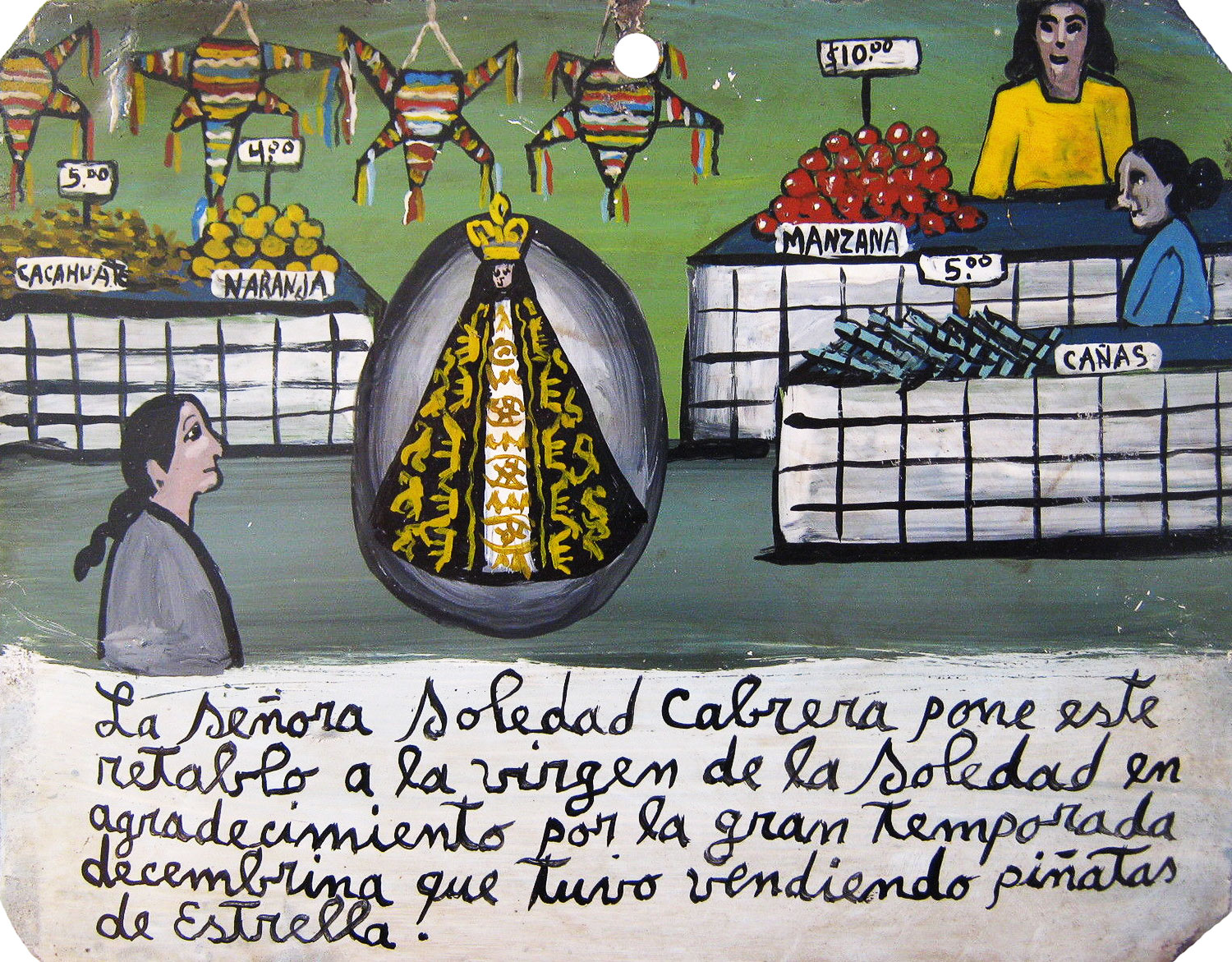 Mrs. Soledad Cabrera brings this retablo to the Virgin of the Solitude thanking her for the good December star-shaped piñatas selling season.

— tagged with Virgin of the Solitude and piñata, vendors — # 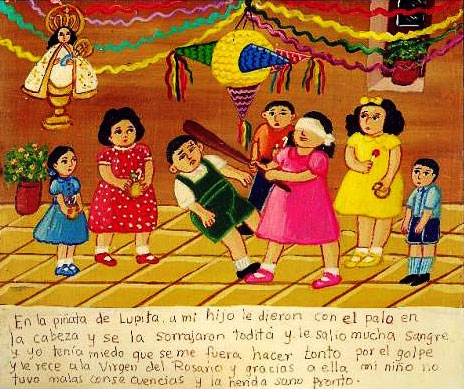 During the Lupita’s piñata, my son was hit by a stick. His head was wounded, and he was bleeding. I was scared that he’d become an idiot, so I prayed to the Virgin of the Rosary. Thanks ti her my son had no bad consequences and recovered very quickly.

— tagged with Virgin of the Rosary and accident, celebration, children, injuries, party, piñata — # 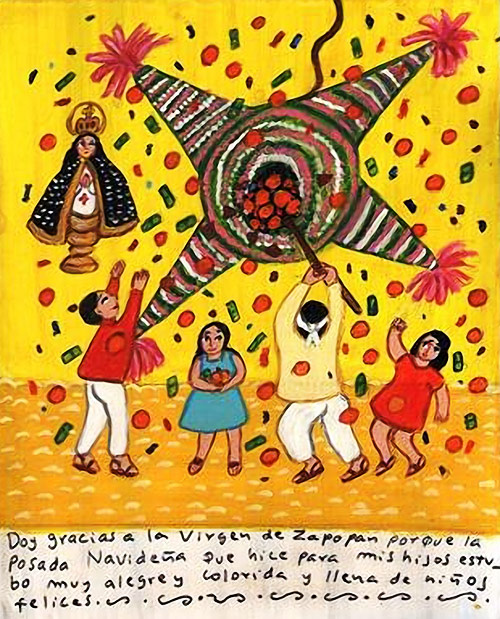 I give thanks to the Virgin of Zapopan because at the Christmas party that I had for my kids everything was fun and there were a lot of happy children.

— tagged with Virgin of Zapopan and Christmas and children, party, piñata — # 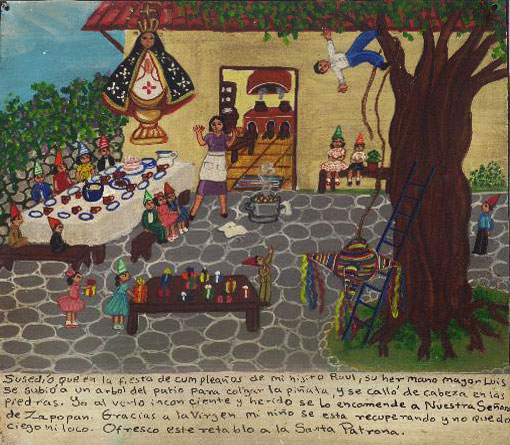 On my son Raul’s birthday party his older brother Luis climbed on a tree in the garden to fix piñata. He fell down and hit his head on the rocks. I saw him unconscious and wounded and I entrusted him to the Holy Virgin of Zapopan. Thanks to the Virgin the boy got better, didn’t lose his sight and didn’t became fool. I offer this retablo to the Saint Patroness.