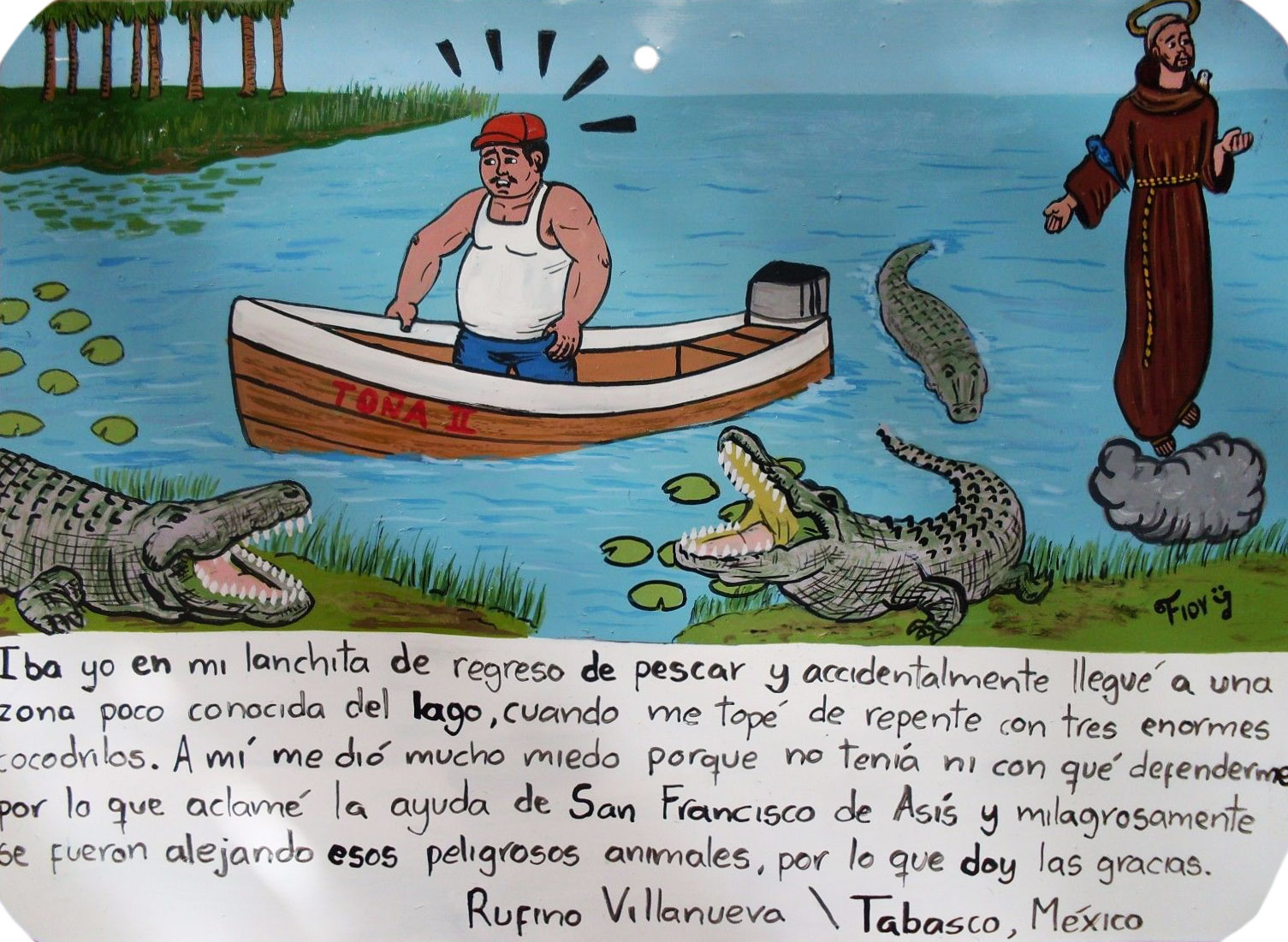 I was coming back from fishing in my boat when I accidentally got myself into a part of lake I didn’t know well. Suddenly I stumbled upon three huge crocodiles. I got very scared because I had nothing to defend myself. That’s why I implored Saint Francis of Assisi for help, and then, by a miracle, those dangerous animals went away. I give thanks for that.

— tagged with Saint Francis of Assisi and animals, boat, crocodiles, lake and Tabasco — # 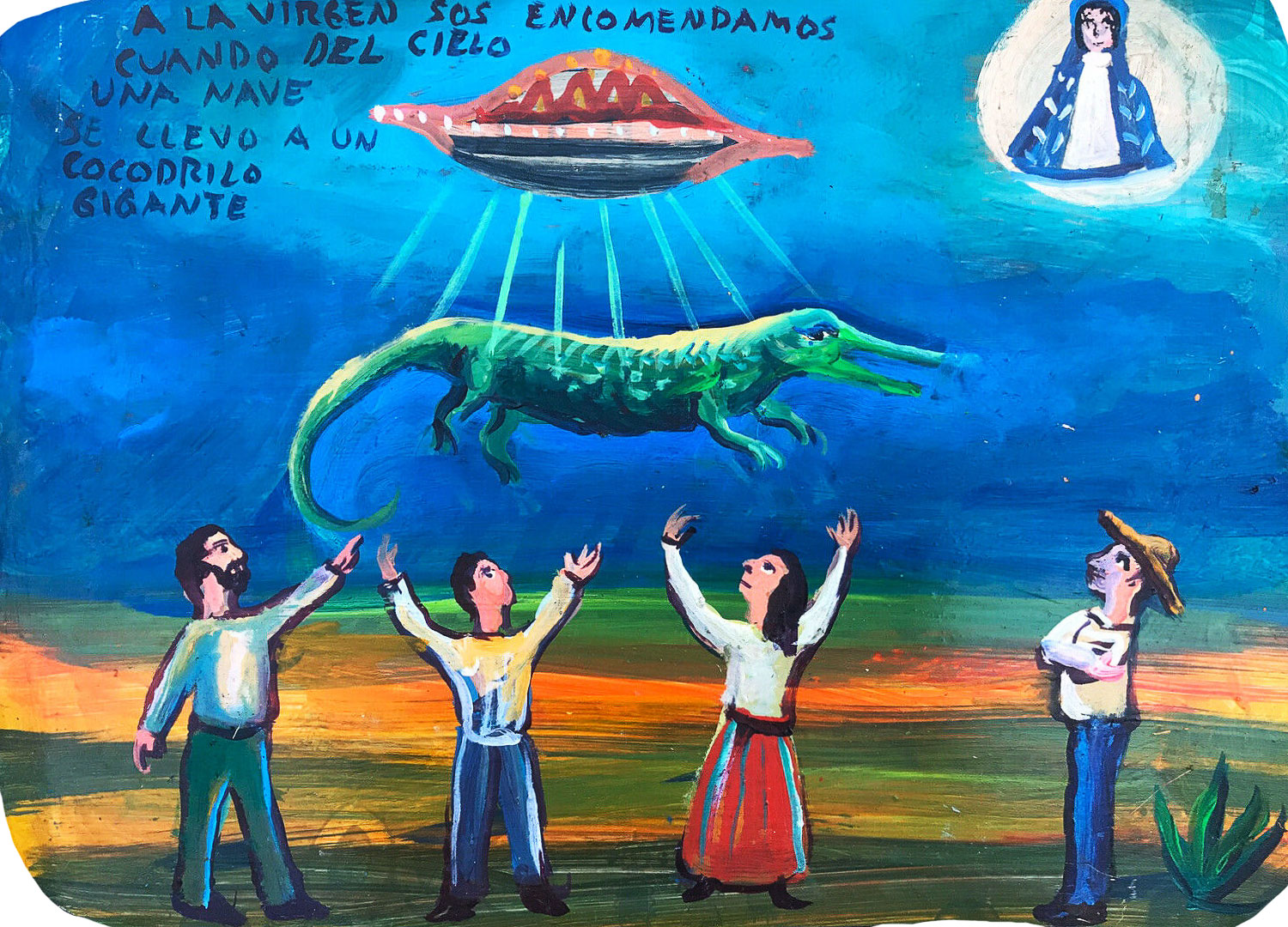 We entrusted ourselves to the Virgin when a ship from the sky took a giant crocodile.

— tagged with Virgin of San Juan and animals, crocodiles, UFO — # 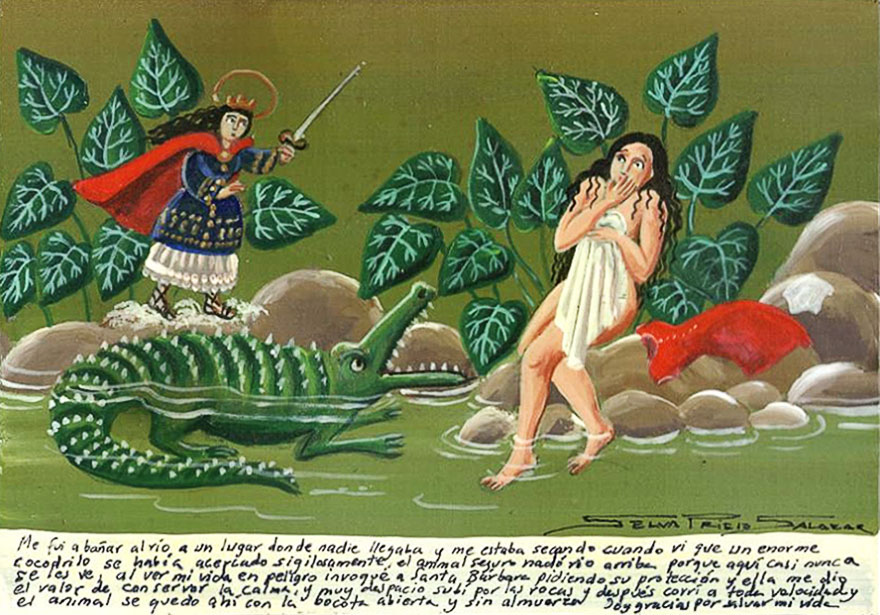 I went to the river to swim in a place where nobody comes. When I was drying myself off I saw an enormous crocodile stealthily approaching me. Surely, the beast swam up the river because I’ve never seen crocodiles here. Seeing that my life was in danger, I implored Saint Barbara asking for her protection. She gave me courage to keep my calm. I climbed up the rocks very slowly and then ran at full speed, and the crocodile stayed there with his opened mouth and without lunch. I thank for saving my life. 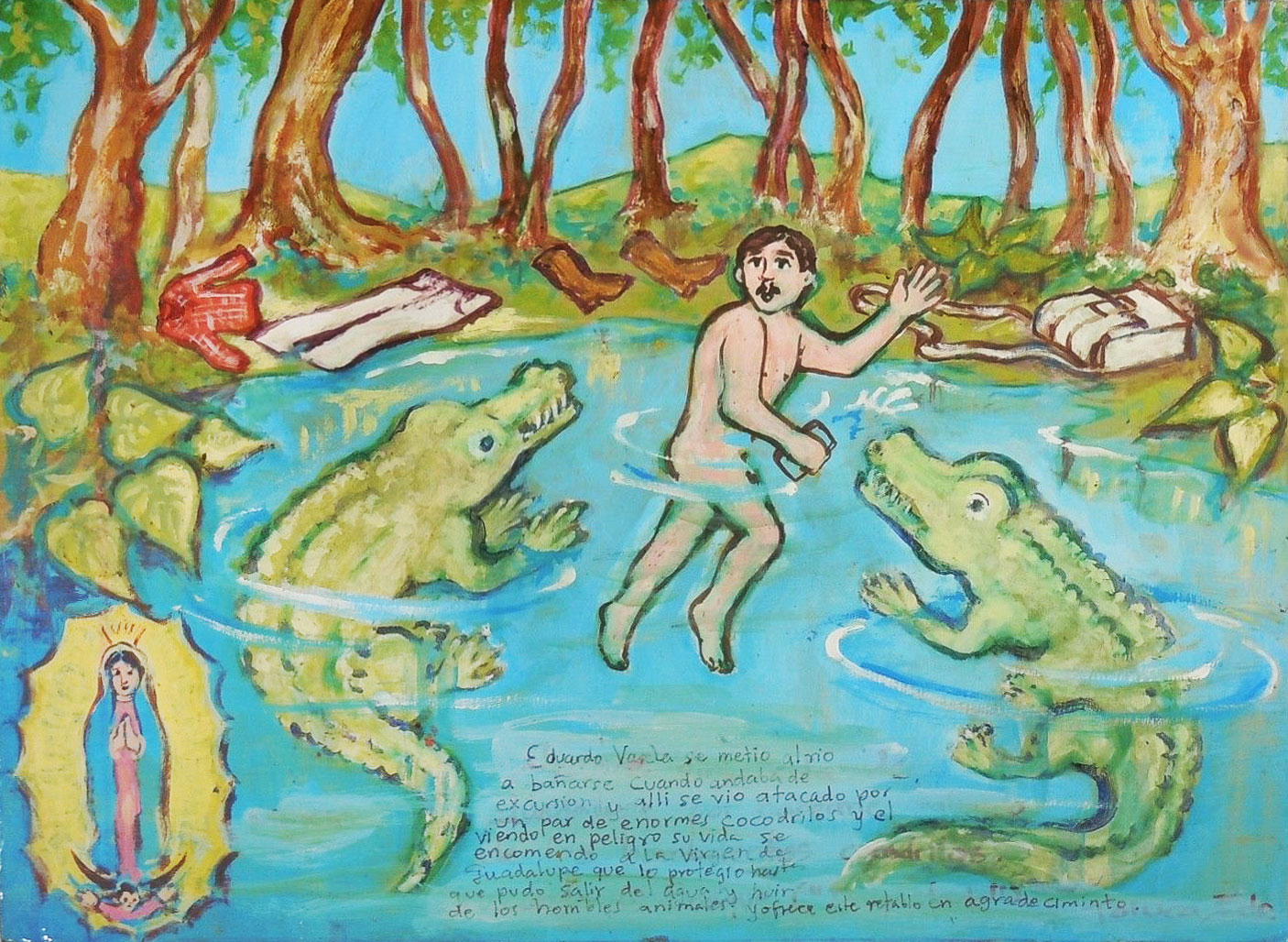 Eduardo Varela went to swim in the river during his excursion. There he saw that he was about to be attacked by two enormous crocodiles. Finding his life in danger, he entrusted himself to the Virgin of Guadalupe who protected him so he could get out of the water and escape from those horrible animals. He offers this retablo in gratitude.

— tagged with Virgin of Guadalupe and animals, camping, crocodiles, river — #

January 4, 1931, Eutimio Mora went to swim while he was fishing at the Champoton laguna and had an encounter with a crocodile of more than two meters long. It attacked him furiously, and, finding himself exhausted, he was lucky to entrust himself to the divine image and was saved. He brings the present retablo in gratitude.

— tagged with Virgin of Guadalupe and animals, crocodiles, fishermen, lake and Champoton — # 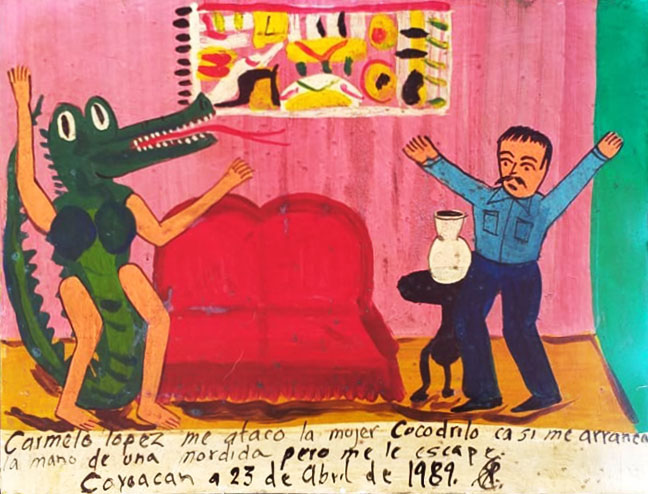 Carmelo Lopez, I was attacked by a crocodile woman and she almost bit off my arm but I escaped.

— tagged with crocodiles, monsters and Coyoacan — # 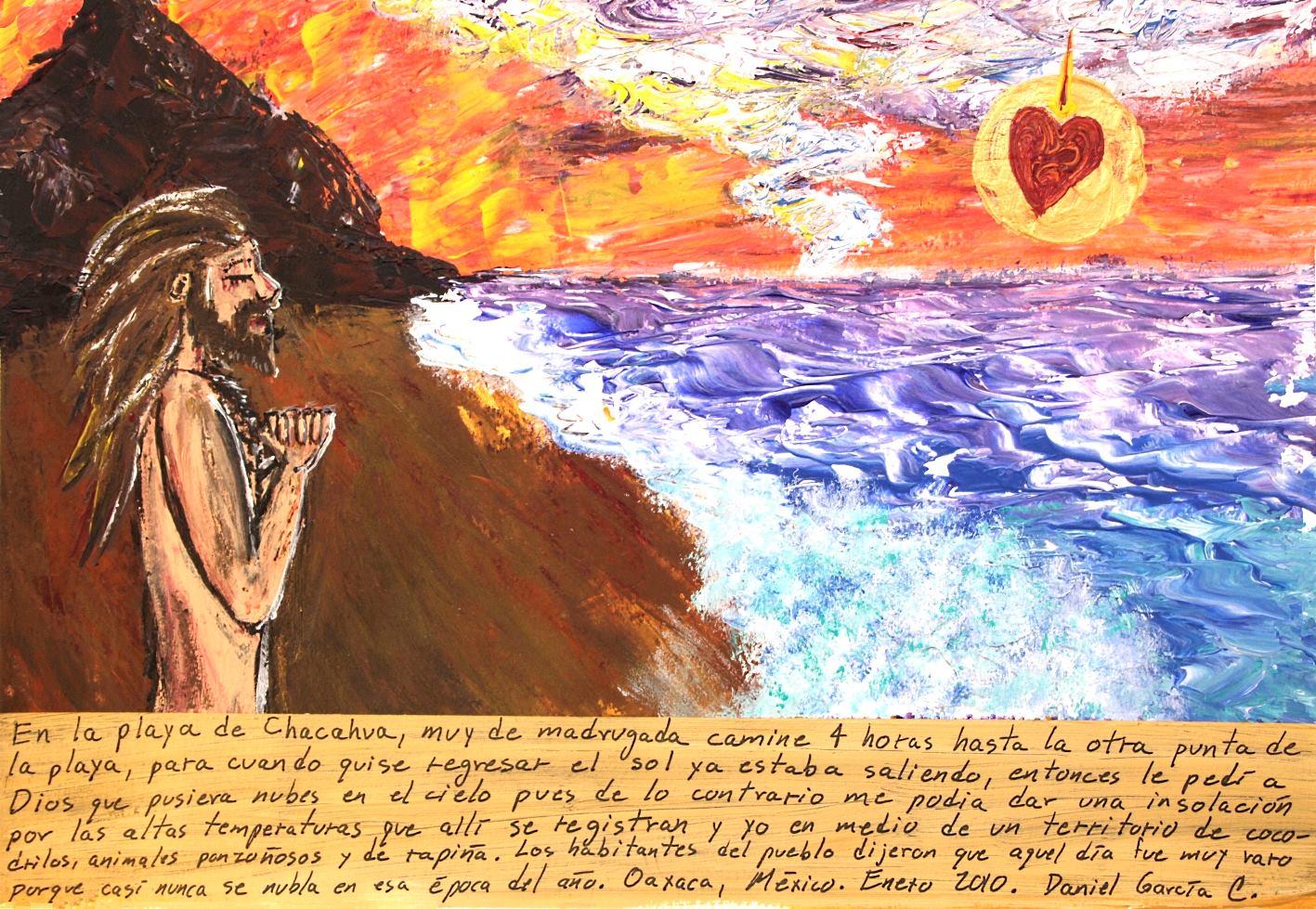 At the beach of Chacahua, very early in the morning, I walked four hours to the other side of the beach. When I wanted to return, the sun was already coming out, so I asked God to put clouds in the sky because otherwise I could’ve got sunstroke by the high temperatures that are recorded there, and me being in the middle of a territory with crocodiles, poisonous animals and predators. The villagers said that day was very strange because there are almost never clouds at that time of year. 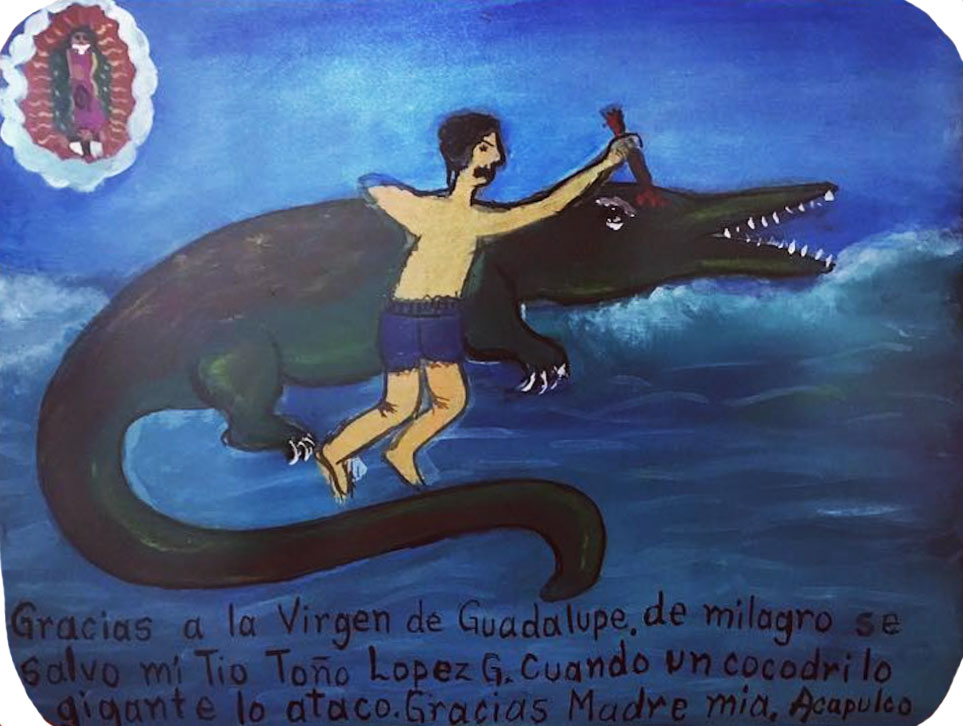 Thanks to the Virgin of Guadalupe for the miracle that my uncle Toño Lopez G. was saved when he was attacked by a giant crocodile. Thank you, my Mother.

— tagged with Virgin of Guadalupe and animals, crocodiles, knife and Acapulco — # 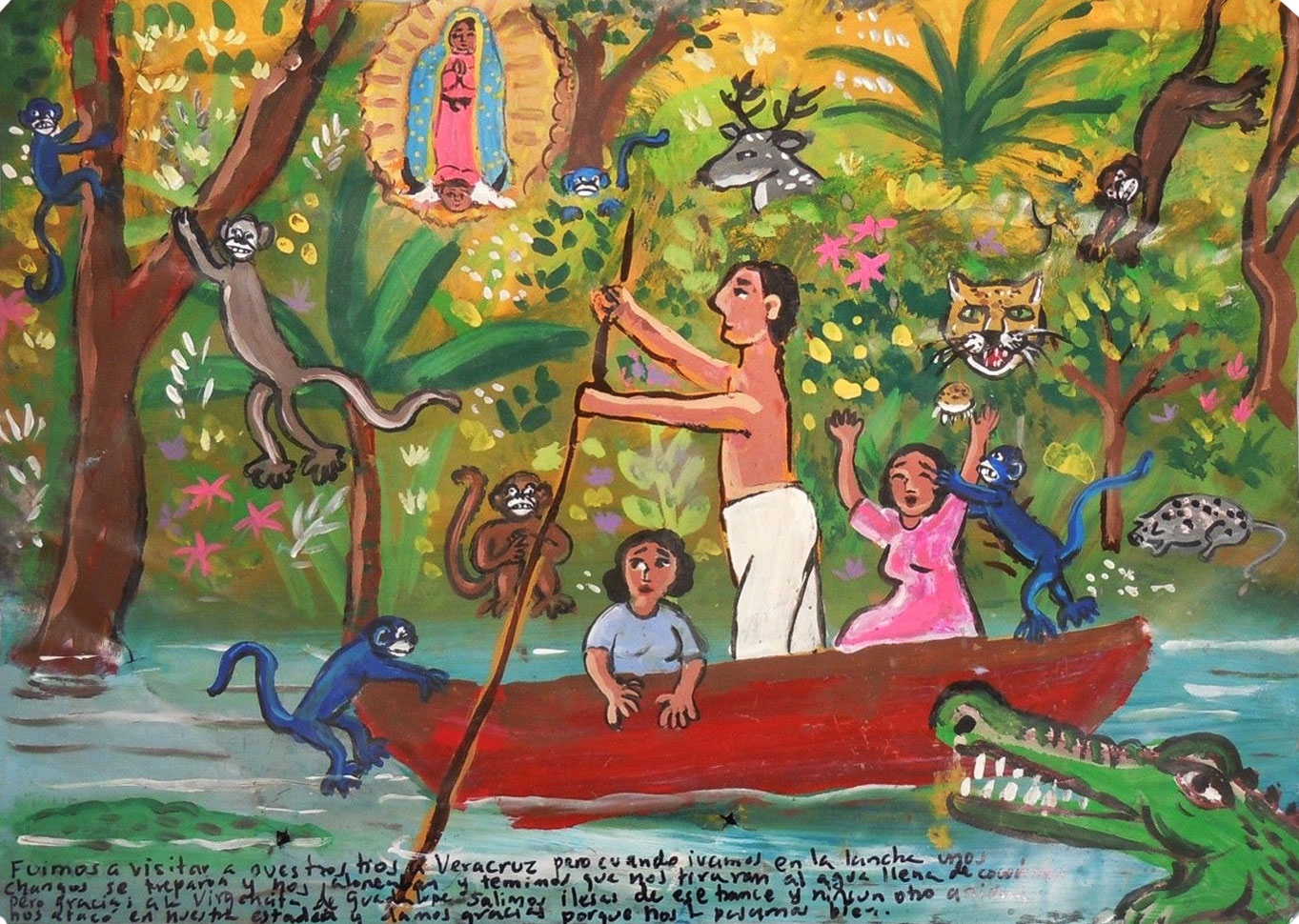 We went to Veracruz to visit our aunts and uncles. When we were going in the boat some monkeys climbed over. They began to rock the boat, and we were afraid they would push us into the water full of crocodiles. But thanks to the Virgin of Guadalupe we managed to escape safely from this difficult situation. No more animals attacked us during that trip. We thank for we went through it well.

— tagged with Virgin of Guadalupe and animals, boat, crocodiles, monkeys, river and Veracruz — # 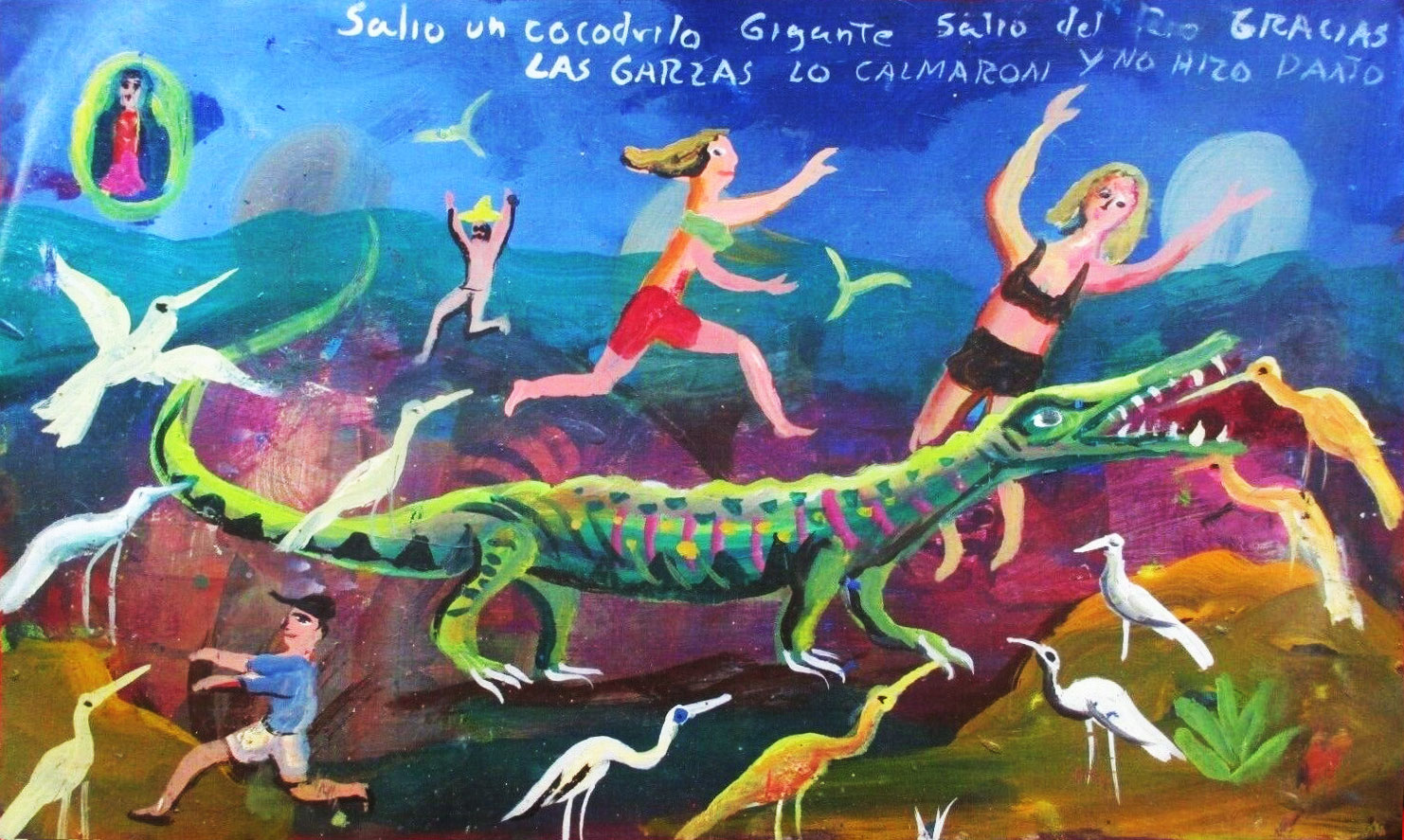 A giant crocodile came out of the river. Thanks for the herons calmed him down and he didn’t do any harm. 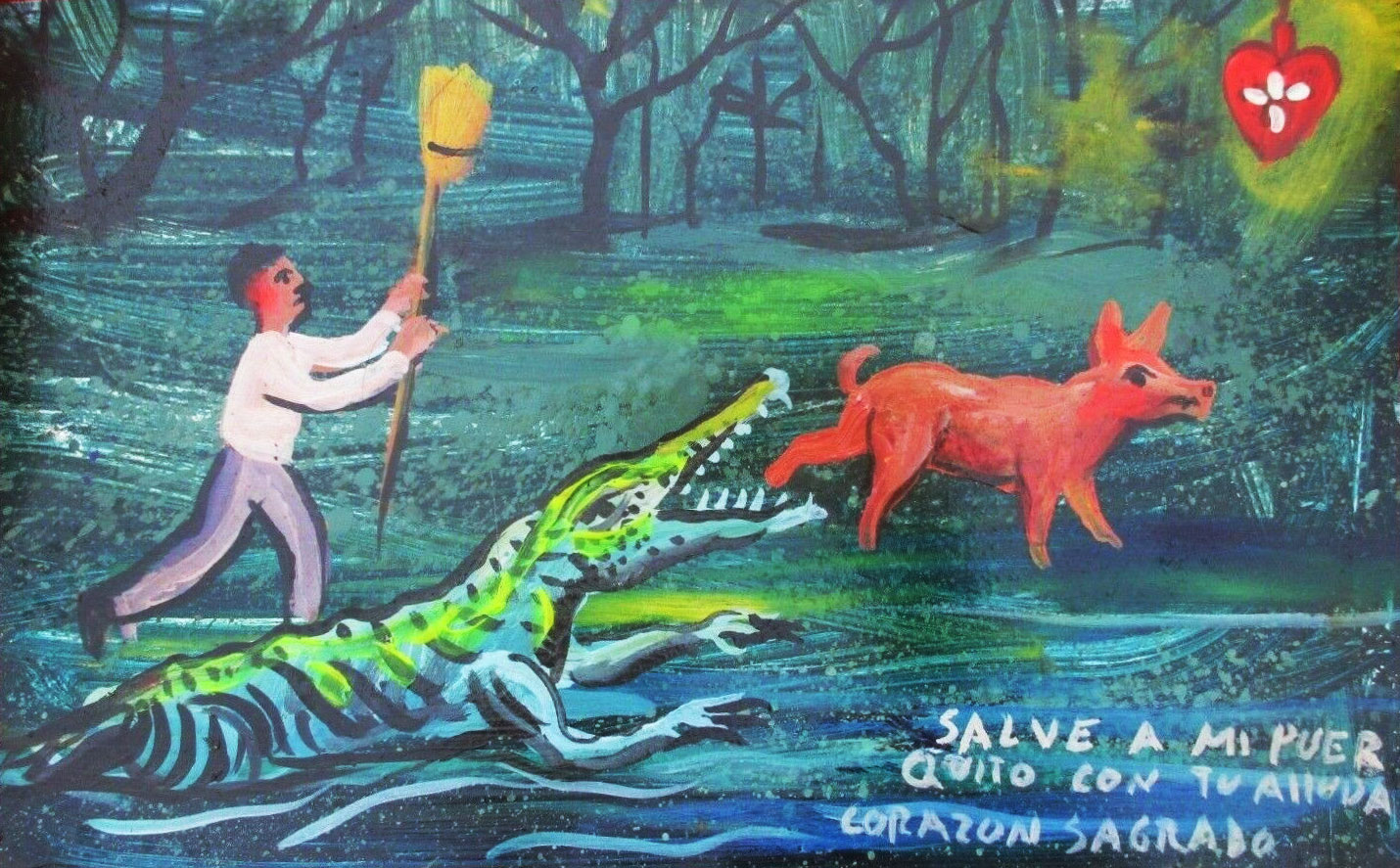 I saved my piglet with your help, Holy Heart. 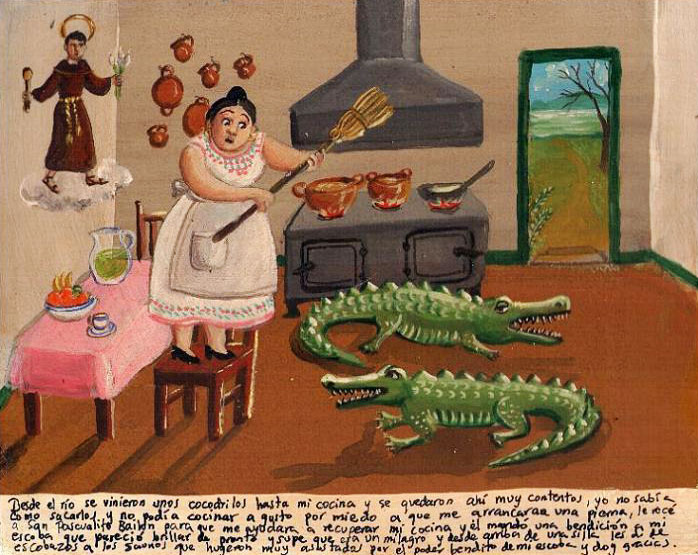 Some crocodiles came from the river to my kitchen. They were very happy staying there. I had no idea how to chase them away. I couldn’t cook beaqcuse I was afraid they bite my leg off. I prayed Saint Paschal Baylon to help me get my kitchen back. He blessed my broom that right away seemed shining. I knew it was a miracle, so I got on a stool and began to swipe the crocodiles out. The blessed power of my broom scared them a lot, and they went away. I give thanks. 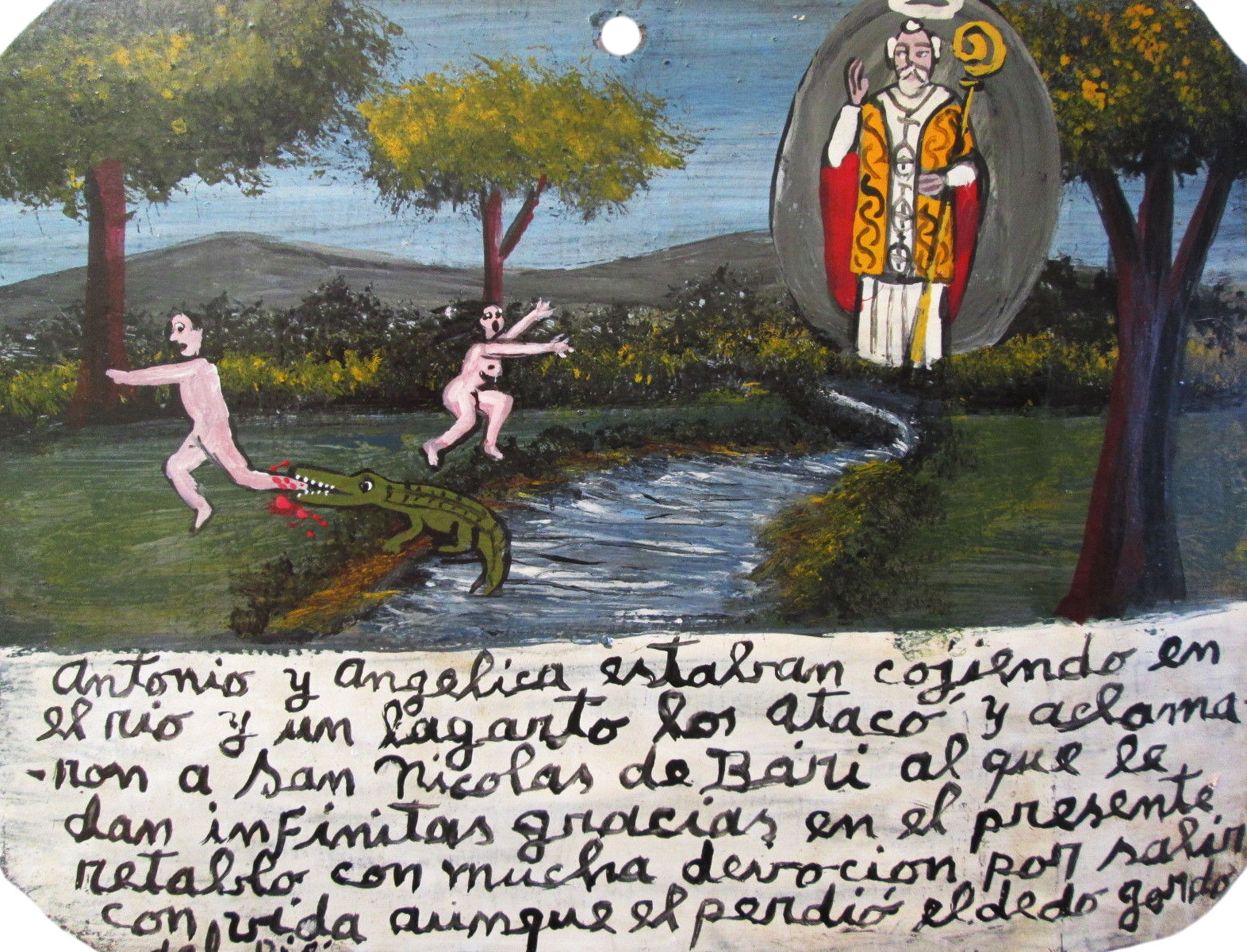 Antonio and Angelica were fucking in the river when a crocodile attacked them. They implored Saint Nicholas of Bari whom they thank, with this retablo, for saving their lives, although Antonio lost a big toe.