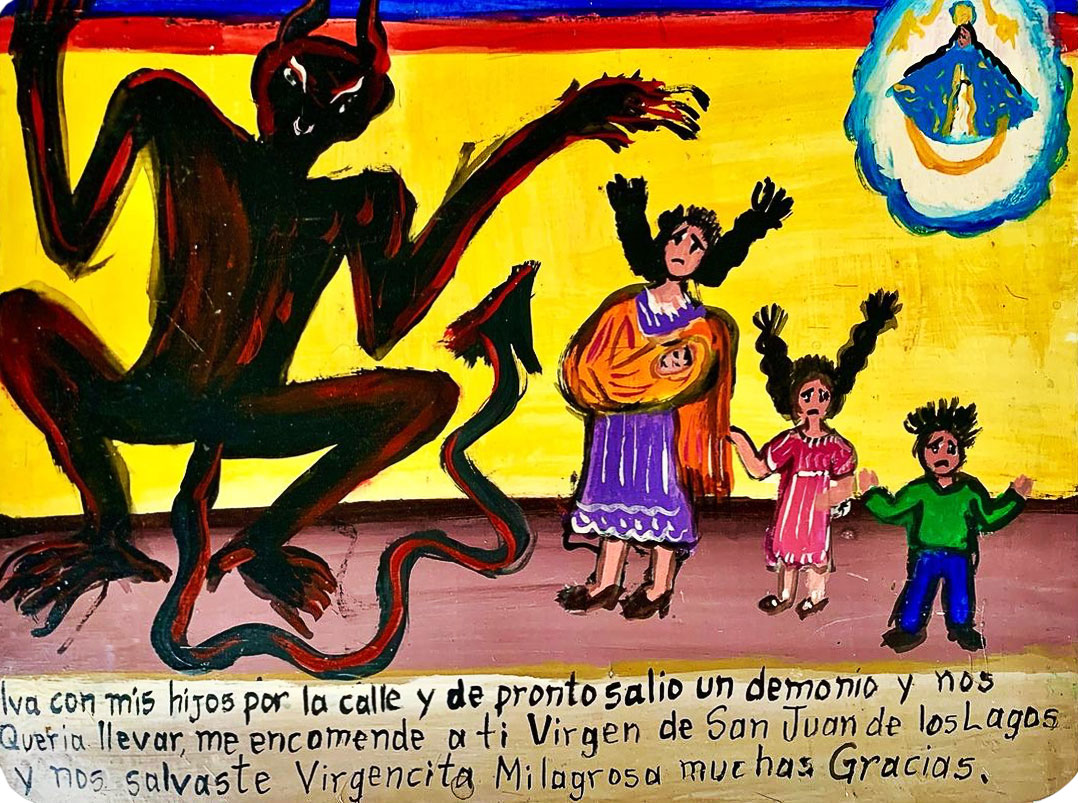 I was walking with my children down the street, when suddenly a demon came out to take us. I entrusted myself to you, Virgin of San Juan, and you saved us. Miraculous Virgin, many thanks.

— tagged with Virgin of San Juan and children, demons — # I thank the Virgin of Guadalupe who saved me one night when I went to work in the field, and a monster appeared, and fire came out from his mouth, and demons tried to catch us. I thank you, Mother of Guadalupe.

— tagged with Virgin of Guadalupe and demons, monsters and San Juan del Rio — #

My children’s socks disappeared in a suspicious and alarming way—there was only one sock missing in every pair. I didn’t know what to do. I bought them more socks, but some time later only one sock from every pair remained. Then, one night, I heard some noises from under the bed. I looked there and I saw green demons who were responsible for the socks disappearance. I thank the Virgin of Zapopan for an idea to sprinkle the holy water under the beds. Now my kids have entire pairs of socks because the demons ran away in fright. 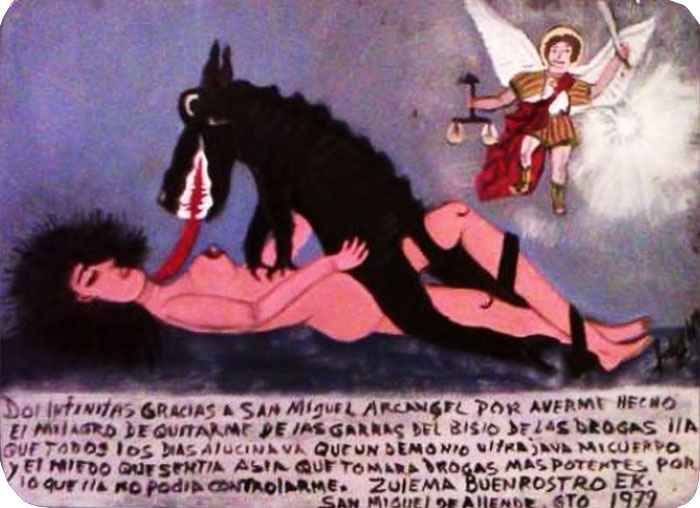 I give infinite thanks to Saint Michael the Archangel for having worked a miracle of delivering me from the clutches of the vice of drugs. Every day I hallucinated that a demon abused my body, and the fear I felt made me take stronger drugs because I couldn’t control myself. 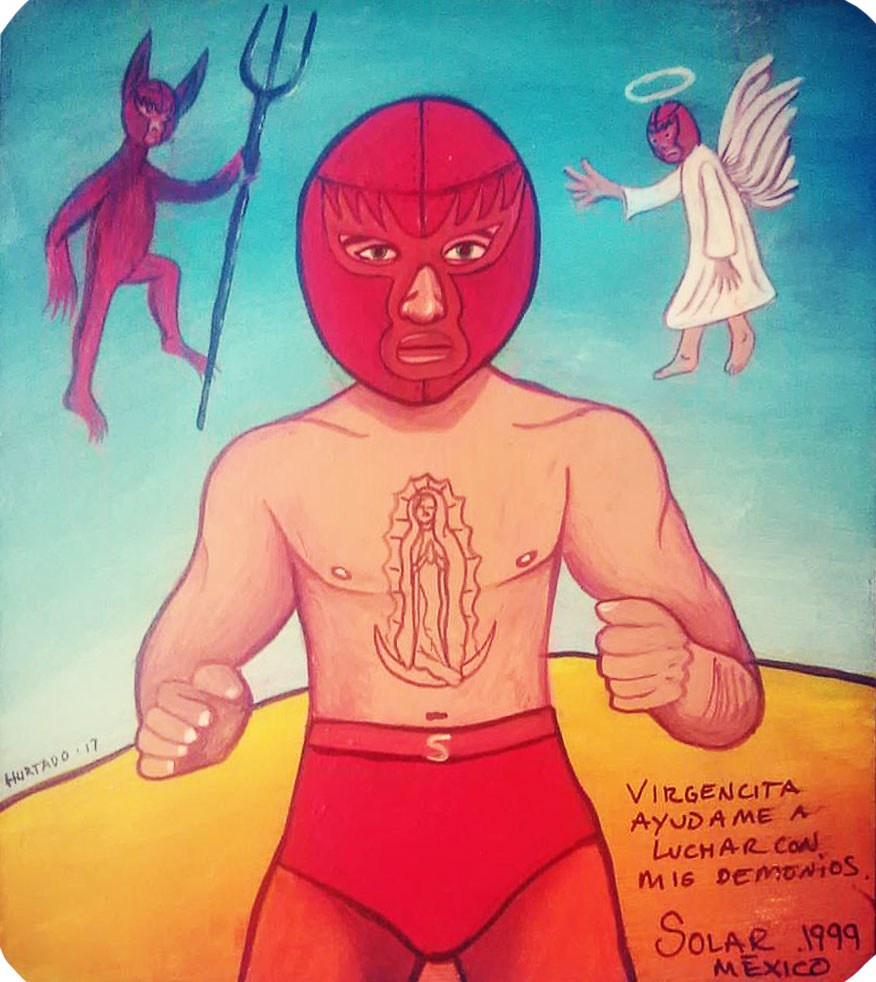 Holy Virgin, help me to fight my demons.

— tagged with Virgin of Guadalupe and El Solar and angels, demons, devil, wrestlers — # 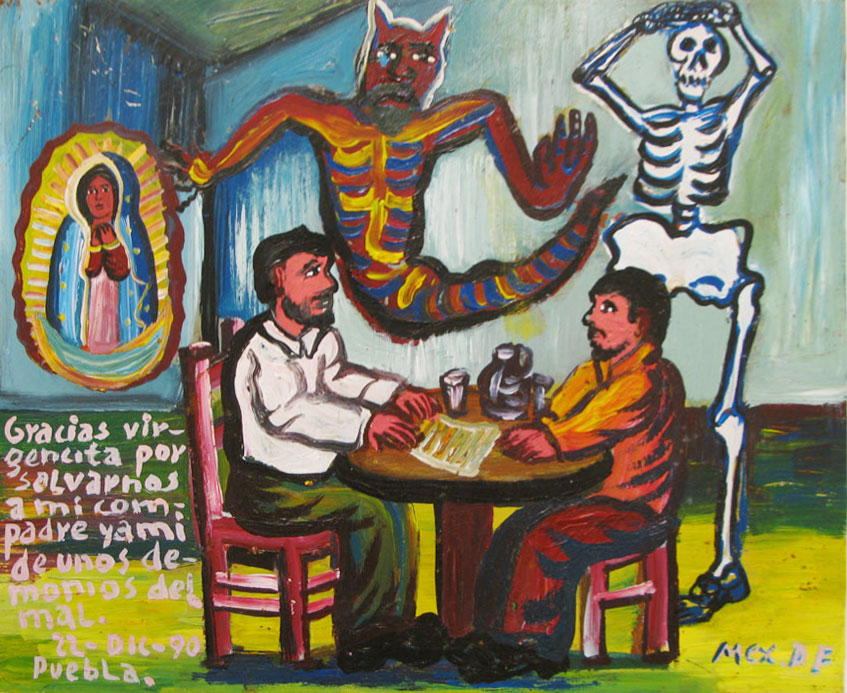 Thank you, Virgin, for saving my buddy and me from demons of evil.

— tagged with Virgin of Guadalupe and demons, skeletons and Puebla — # 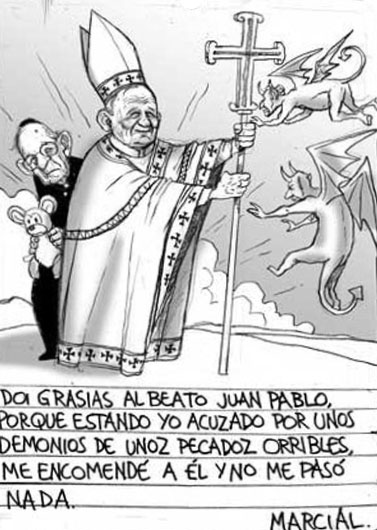 I thank the pious John Paul because, when I was accused by some demons in some horrible sins, I entrusted myself to him and nothing happened to me.

Notes:
Marcial Maciel was a Mexican Catholic priest who was involved in a scandal with accusations that he had sexually abused many minors and fathered a total of six children by three different women. He was close to Pope John Paul II, and Vatican chose not to prosecute Maciel. However, the next pope Benedict XVI forced him to retire from active ministry. 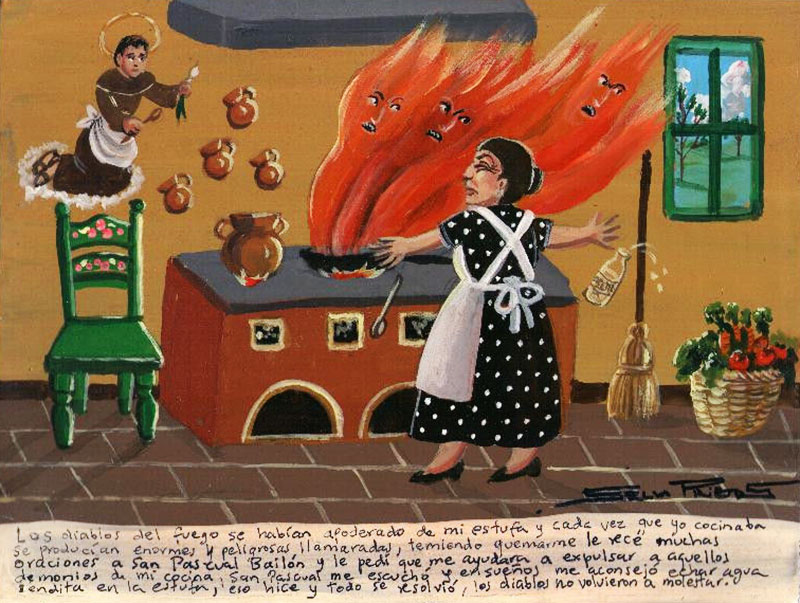 My stove had been possessed by the fire devils. Every time I started to cook I was afraid to get burns because they were causing big dangerous flames. I prayed so much to Saint Paschal Baylon to help me to throw these demons out of my kitchen. The saint herald me and gave me an advice in my dream to sprinkle my stove with holy water. I did so, and it helped. The devils never came back to disturb me.

Thank you, St. Michael, for helping me overcome my demons.

— tagged with Saint Michael the Archangel and demons, ∞ — # 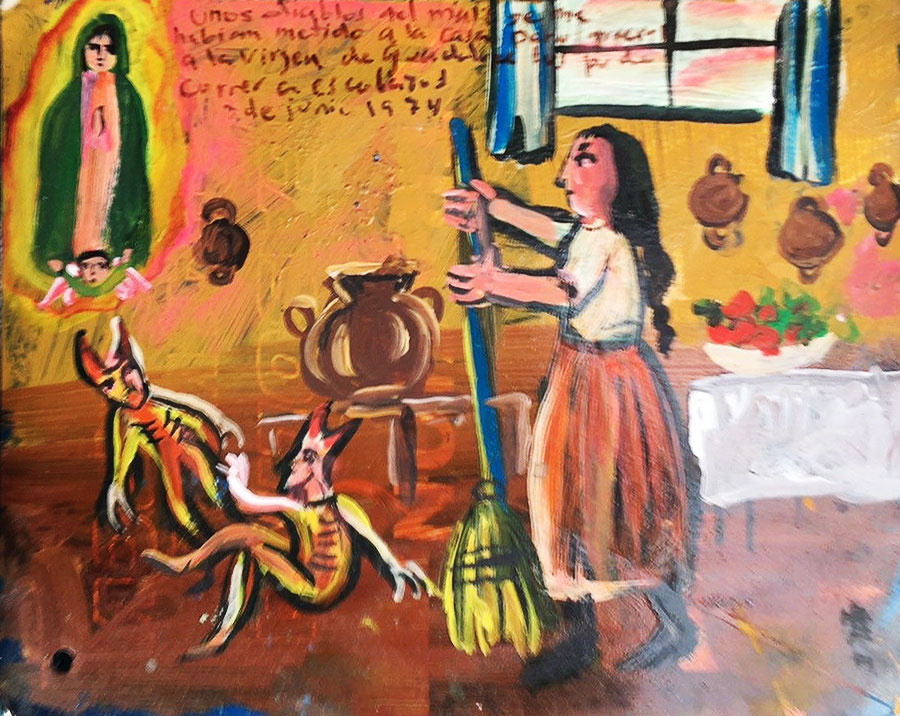 Corn demons came to my house. Thanks to the Virgin of Guadalupe I swept them out.

— tagged with Virgin of Guadalupe and broom, demons, devil — # 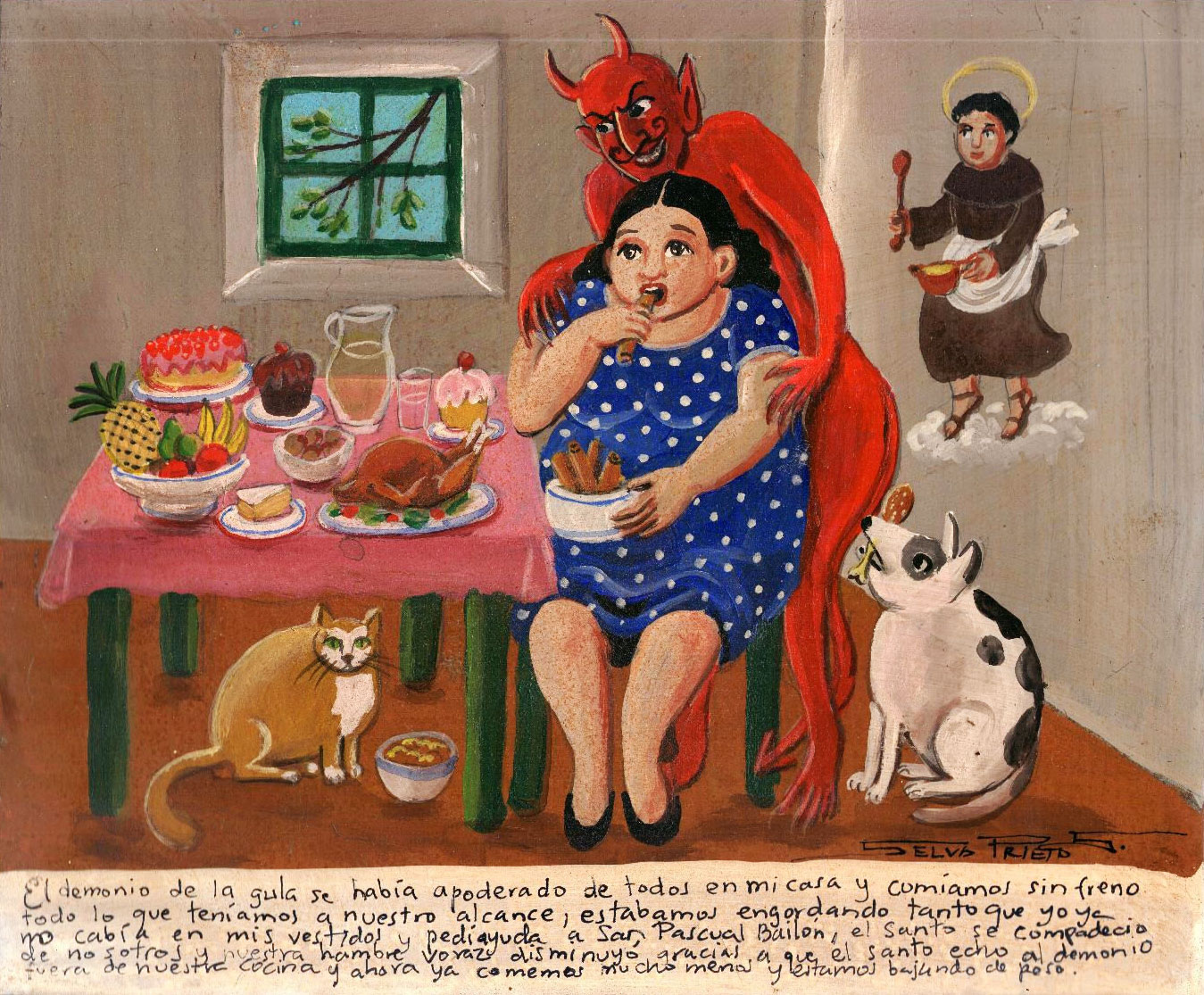 The demon of the gluttony possessed everyone in the house. We ate without a break whatever comes to hand. We became so fat that I couldn’t get in my dresses. Then I asked Saint Paschal Baylon for a help. The saint took mercy upon us, and our voracious hunger started to decline thanks to the fact that the saint chased the demon out from our kitchen. Now we are eating much less and are losing weight. 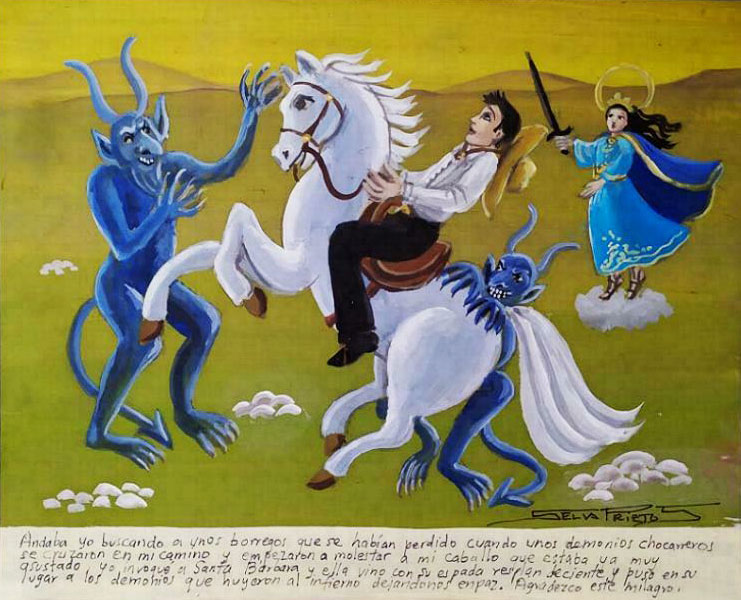 I went to look for some lost sheep when suddenly filthy demons crossed my way and began to torment my horse that got very frightened. I implored Saint Barbara, and then she came with her shining sword and chased the demons back to where they belonged. They ran to hell, leaving us in peace. I’m thanking for this miracle. 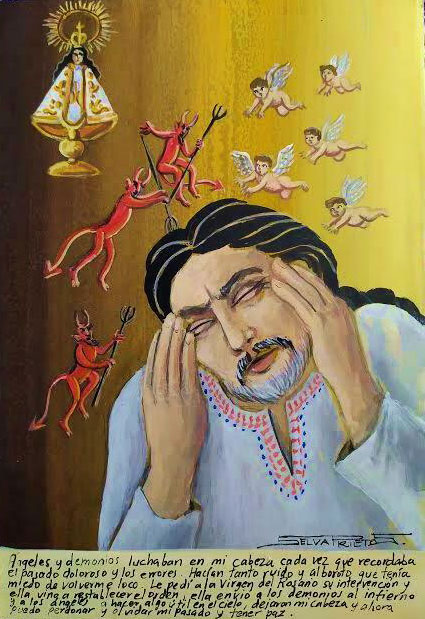 The angels and the demons were fighting in my head every time I had to remember about the painful past and the mistakes. They were making such noise and racket that I was afraid to go insane. I asked the Virgin of the Rosary for her intervention, and she came to establish order. She sent the demons back to the hell and the angels to do something useful at the heaven. They left my head, and now I can forgive and forget my past and have piece.

— tagged with Virgin of the Rosary and angels, demons, devil — #