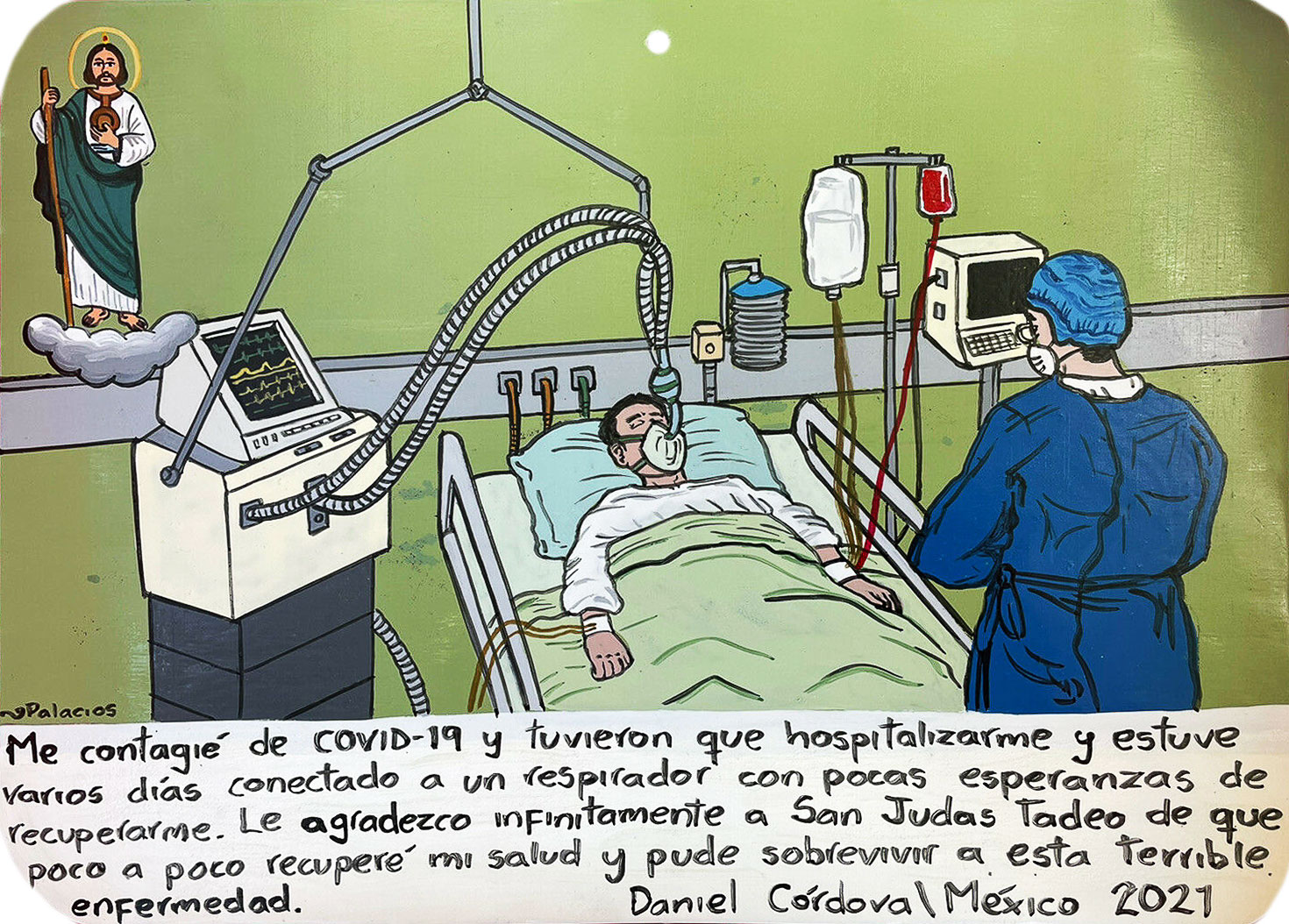 I caught COVID-19 and had to go to the hospital. I spent several days connected to a ventilator, with small hopes to survive. I’m infinitely grateful to Saint Jude Thaddeus because little by little I recovered my health and survived this terrible illness. 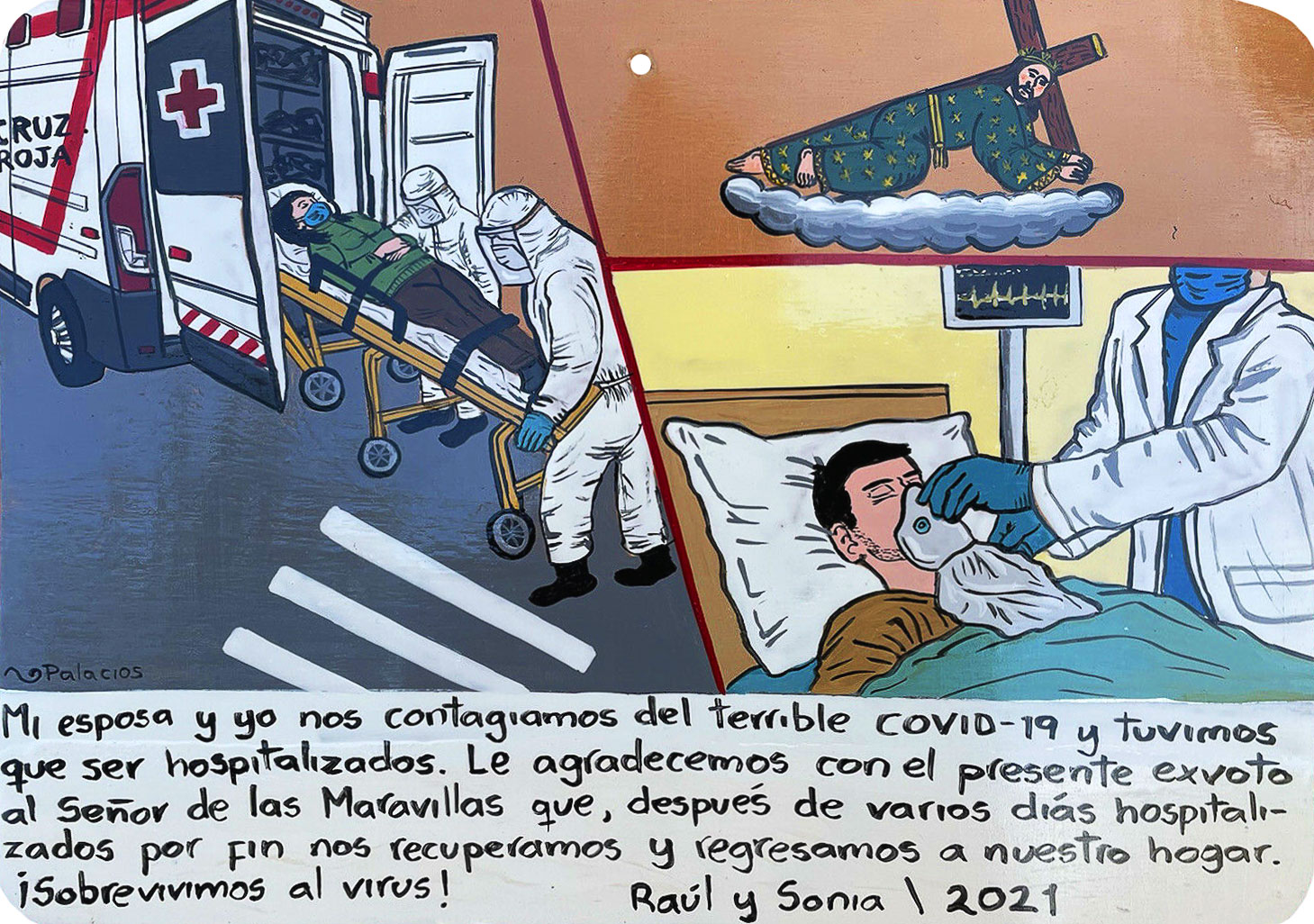 My wife and I caught this terrible COVID-19 and had to be hospitalized. We thank the Lord of the Wonders, with the present exvoto, because after few days in the hospital, we finally recovered and came back home. Let’s survive the virus!

— tagged with Lord of the Wonders and COVID-19, hospital, illness — # 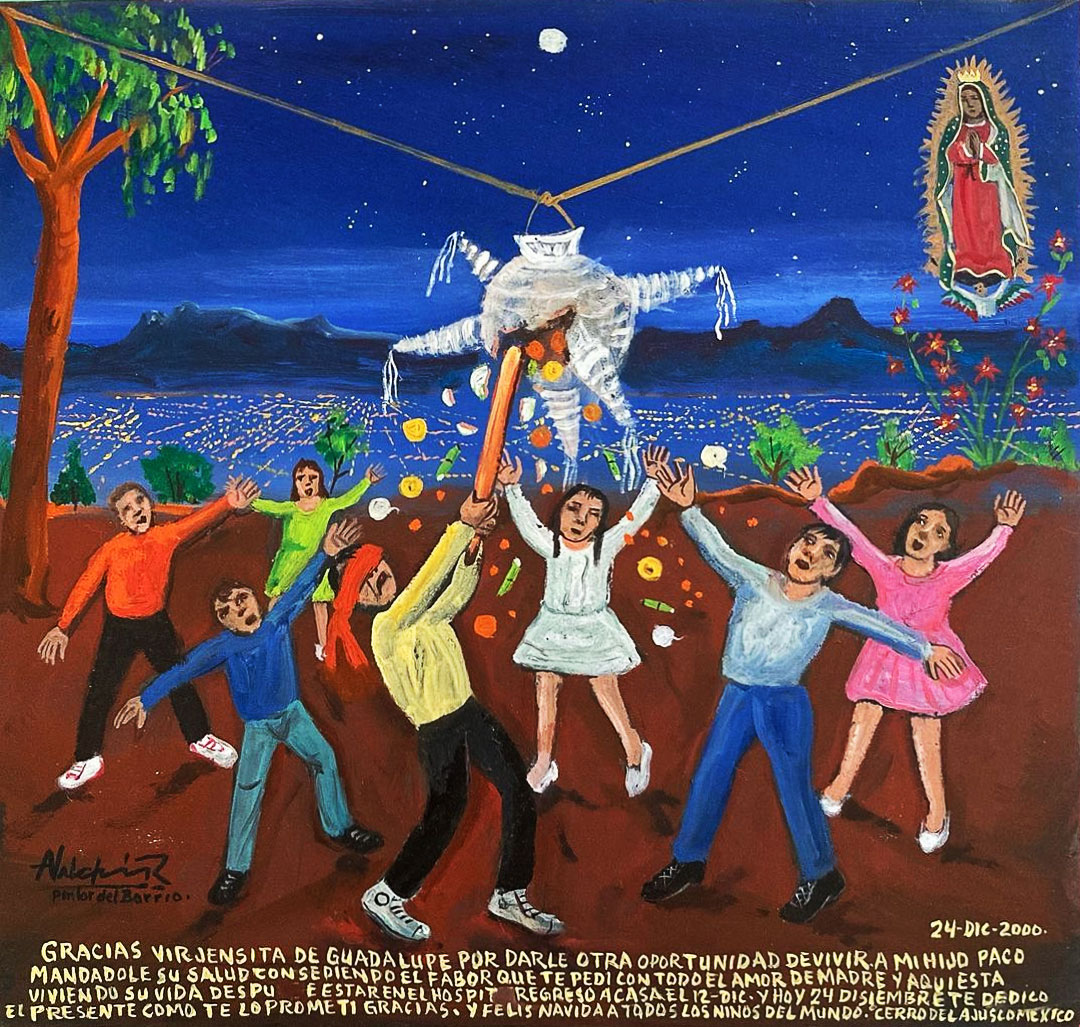 Thank you, Virgin of Guadalupe, for giving my son Paco another chance to live and to bring him health, granting the favor that I asked you for, with all my mother love. Now he’s living his life again, after getting out from the hospital and coming back home on December 12. Today, December 24, I bring you this retablo as I promised you. Thanks and Merry Christmas to all the children of the world!

— tagged with Virgin of Guadalupe and Christmas and celebration, children, hospital, illness and Mexico City — # 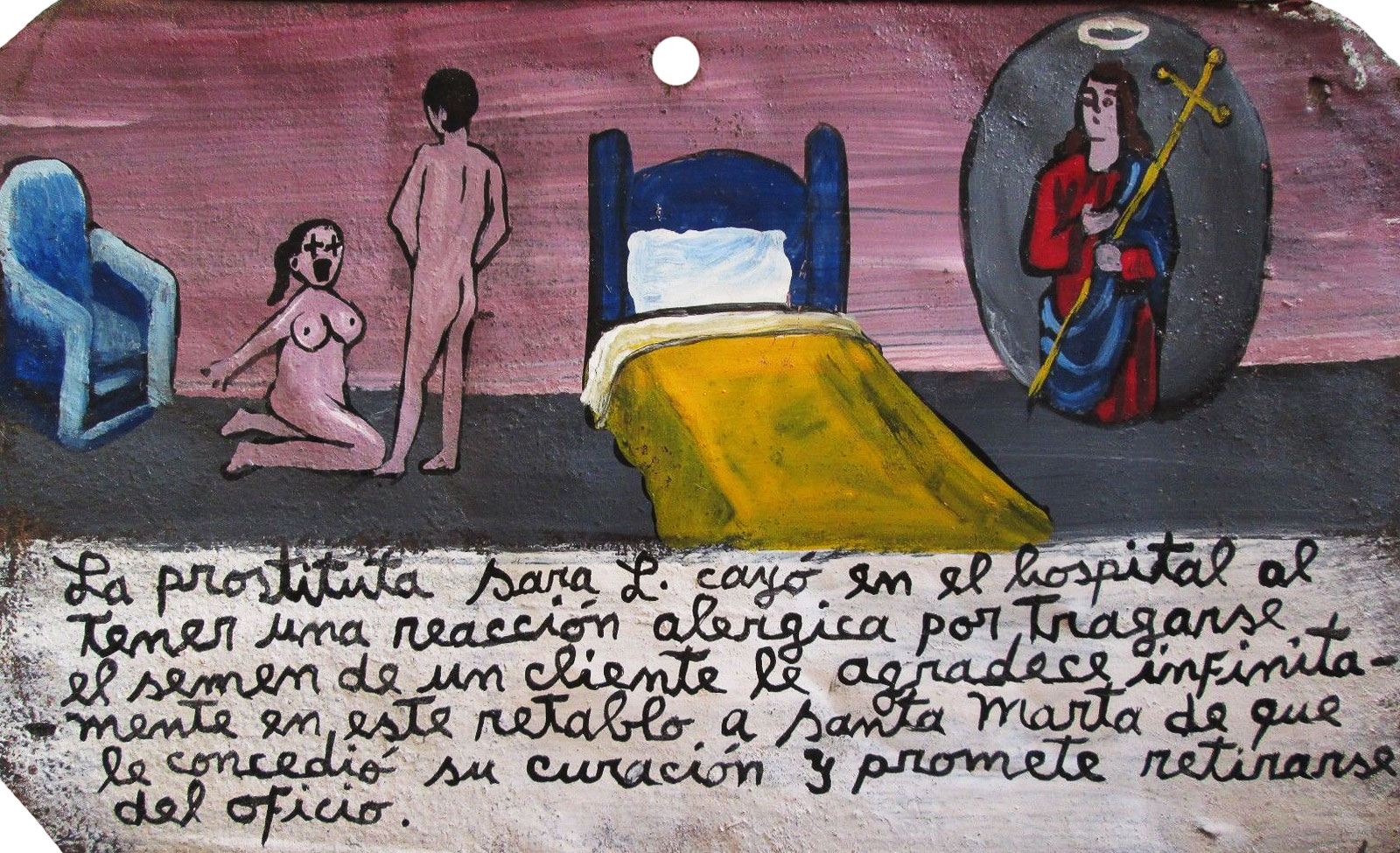 Prostitute Sara L. ended up in the hospital with an allergic reaction after swallowing a client’s semen. She gives infinite thanks to Saint Martha for granting her recovery and promises to retire from this job. 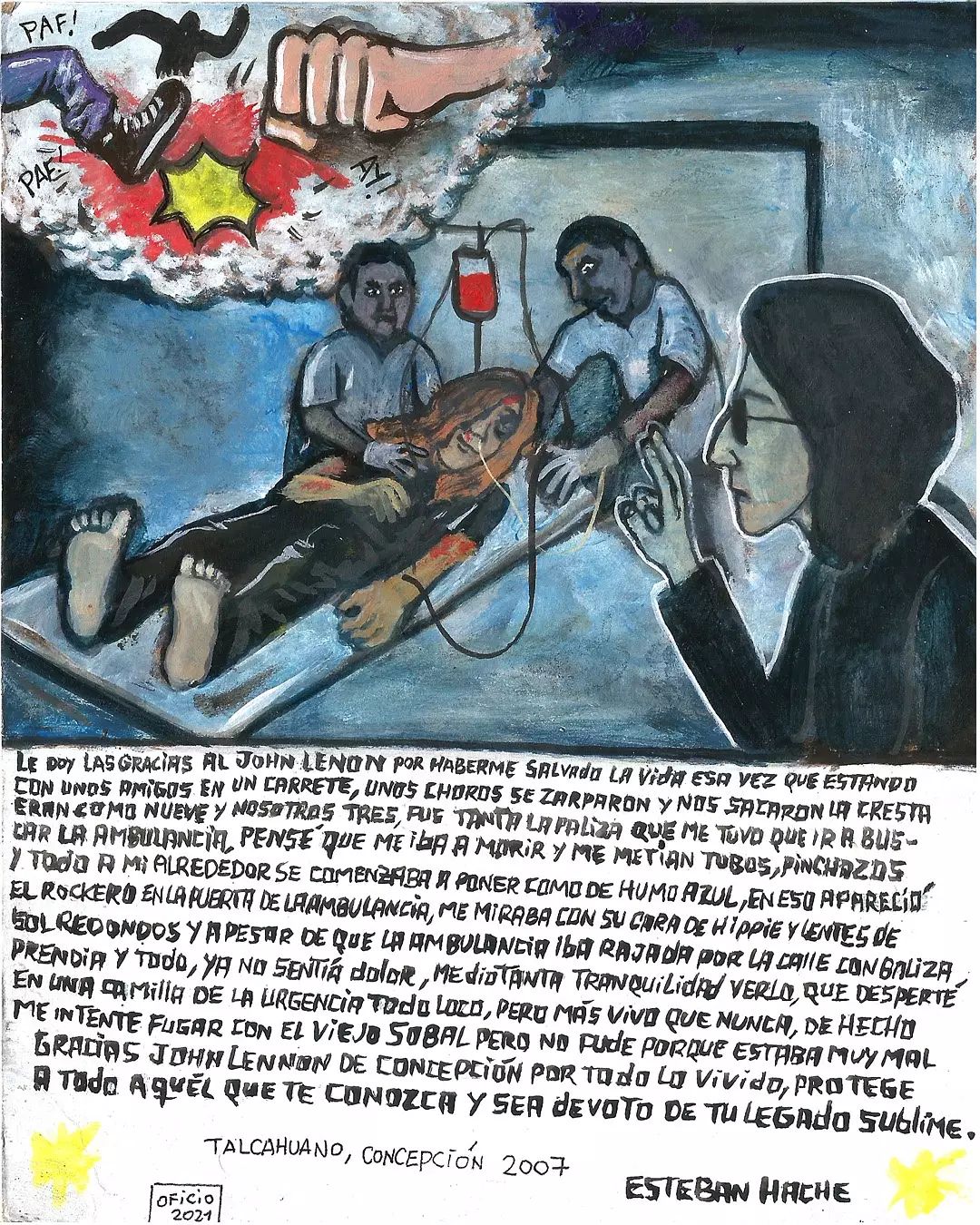 I give thanks to John Lennon for saving my life that time when we were hanging out with guys and some pricks came down on us and beat the shit out of us. They were nine, and we were only three. The beating was so bad, I had to look for an ambulance. I thought I was going to die. They put tubes and needles in me, and everything around me became like in a blue fog. Then the rocker appeared by the ambulance door. He looked at me with his hippy face and round glasses. Although the ambulance was rushing down the street with siren and everything, I didn’t feel pain or anything bad, I felt so much calm and hope looking at him. Suddenly I woke up on a stretcher all crazy but more alive than ever. In fact I even tried to escape with old Sobal but couldn’t because I was still very bad.

Thanks, John Lennon from Concepcion, for everything I lived through, protect all who know you and is devoted to your sublime legacy.

— tagged with John Lennon and ambulance, hospital, violence and Concepción — # 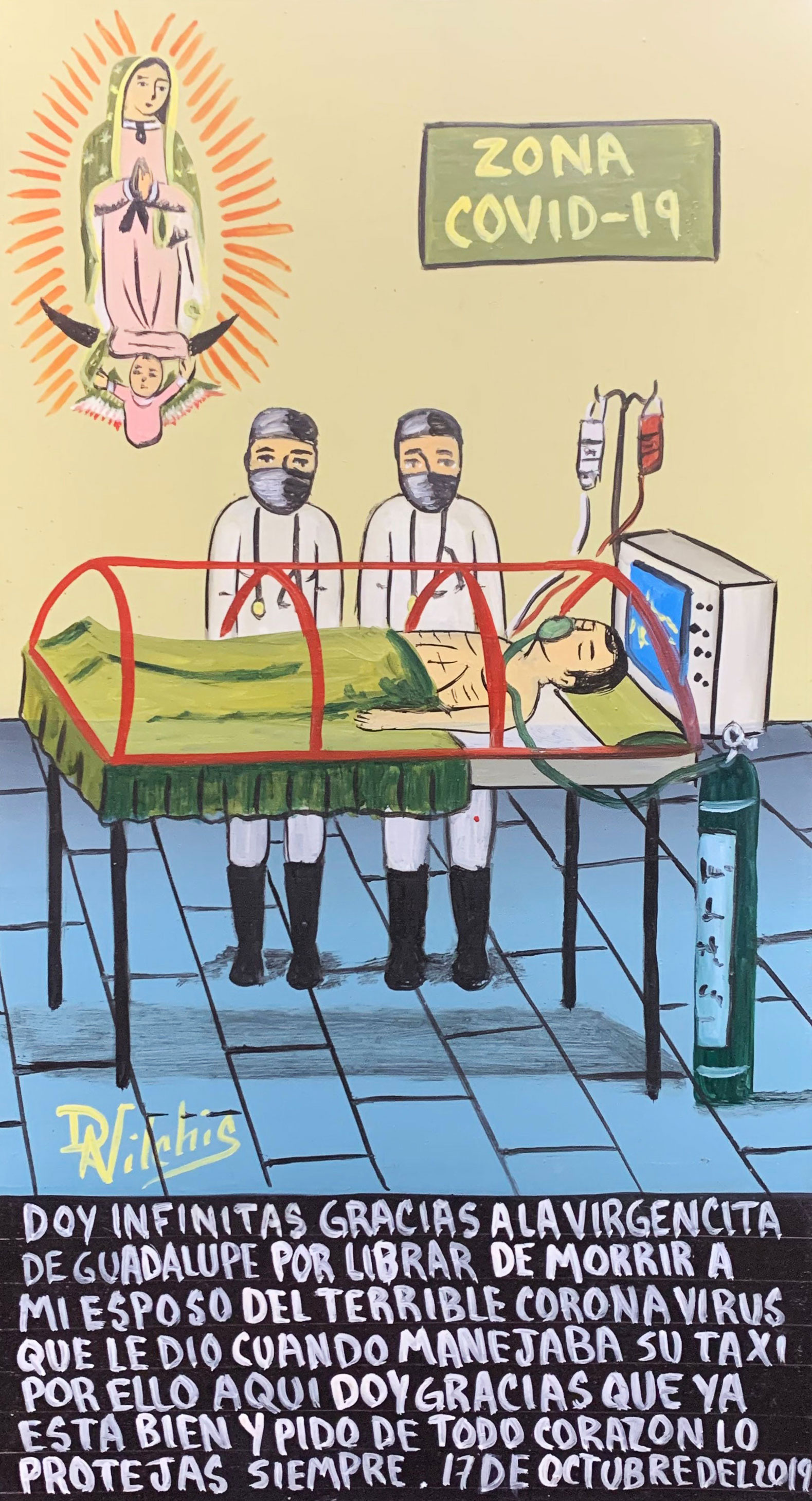 I give infinite thanks to the Virgin of Guadalupe for saving my husband from dying from this horrible coronavirus that he caught while driving in his taxi. Now he’s feeling good, and I thank for that and wholeheartedly ask to always protect him.

— tagged with Virgin of Guadalupe and COVID-19, hospital, illness, taxi — # 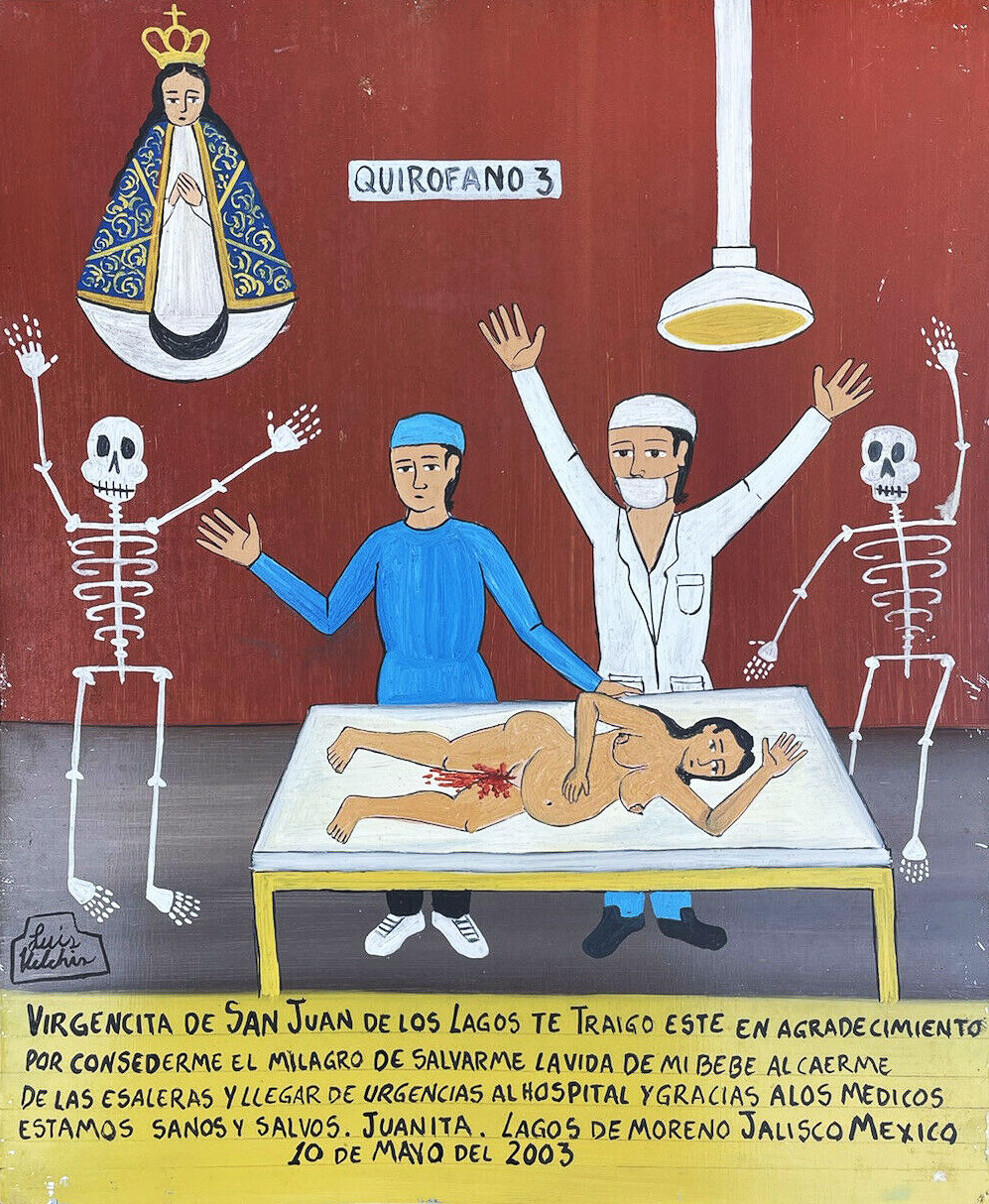 Virgin of San Juan, I bring you this retablo in gratitude for granting me the miracle of saving my baby, when I fell down the stairs and went urgently to the hospital. We are safe and healthy thanks to the medics. 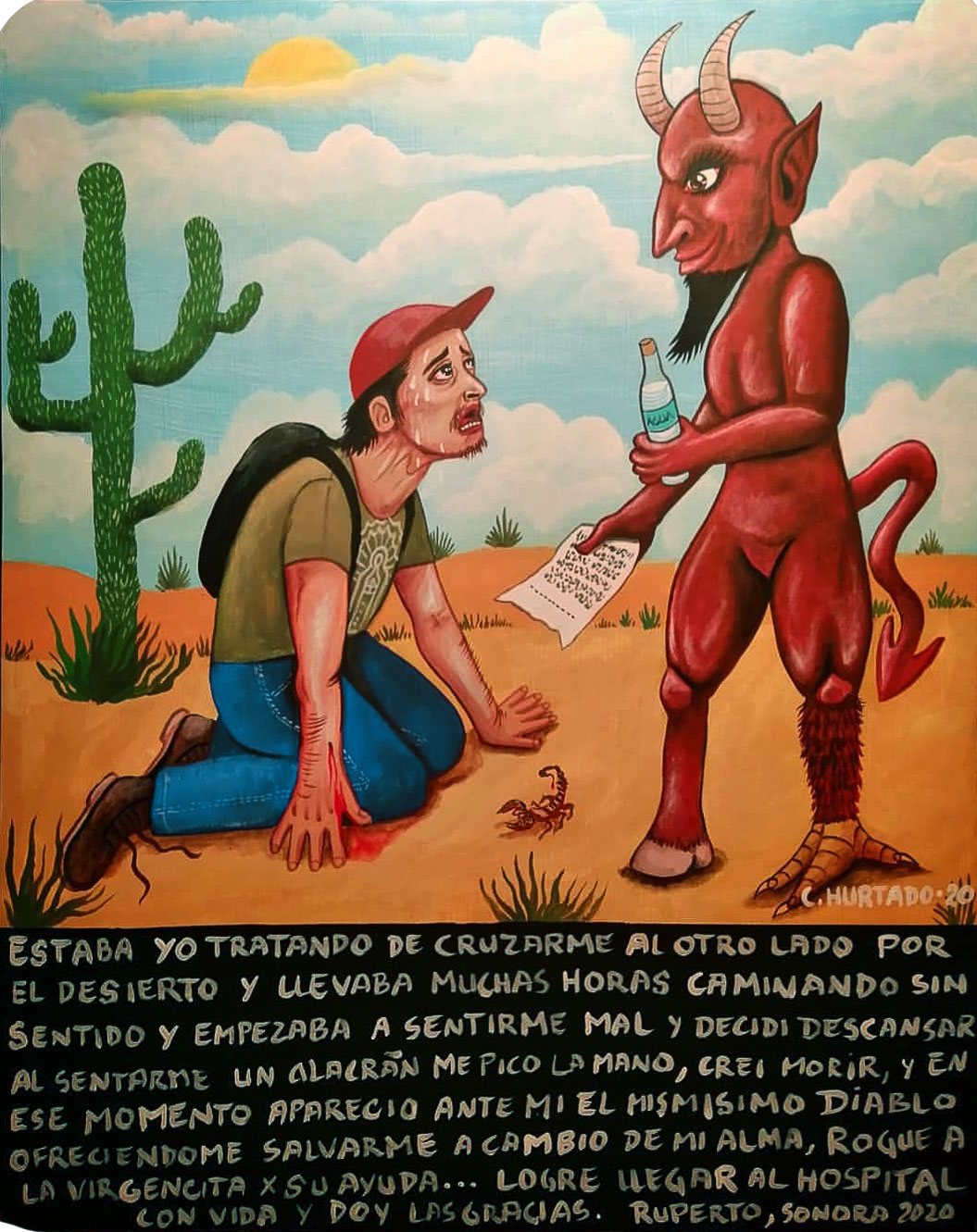 I tried to cross the desert and get to the another side. I walked meaninglessly for many hours, and then I began to feel sick. I decided to take a rest. I sat down, and a scorpion stung my hand. I though I was going to die. In that moment, a devil himself appeared before me and offered to save me in exchange for my soul. I prayed the Virgin for help… and managed to get to the hospital alive. I give thanks. 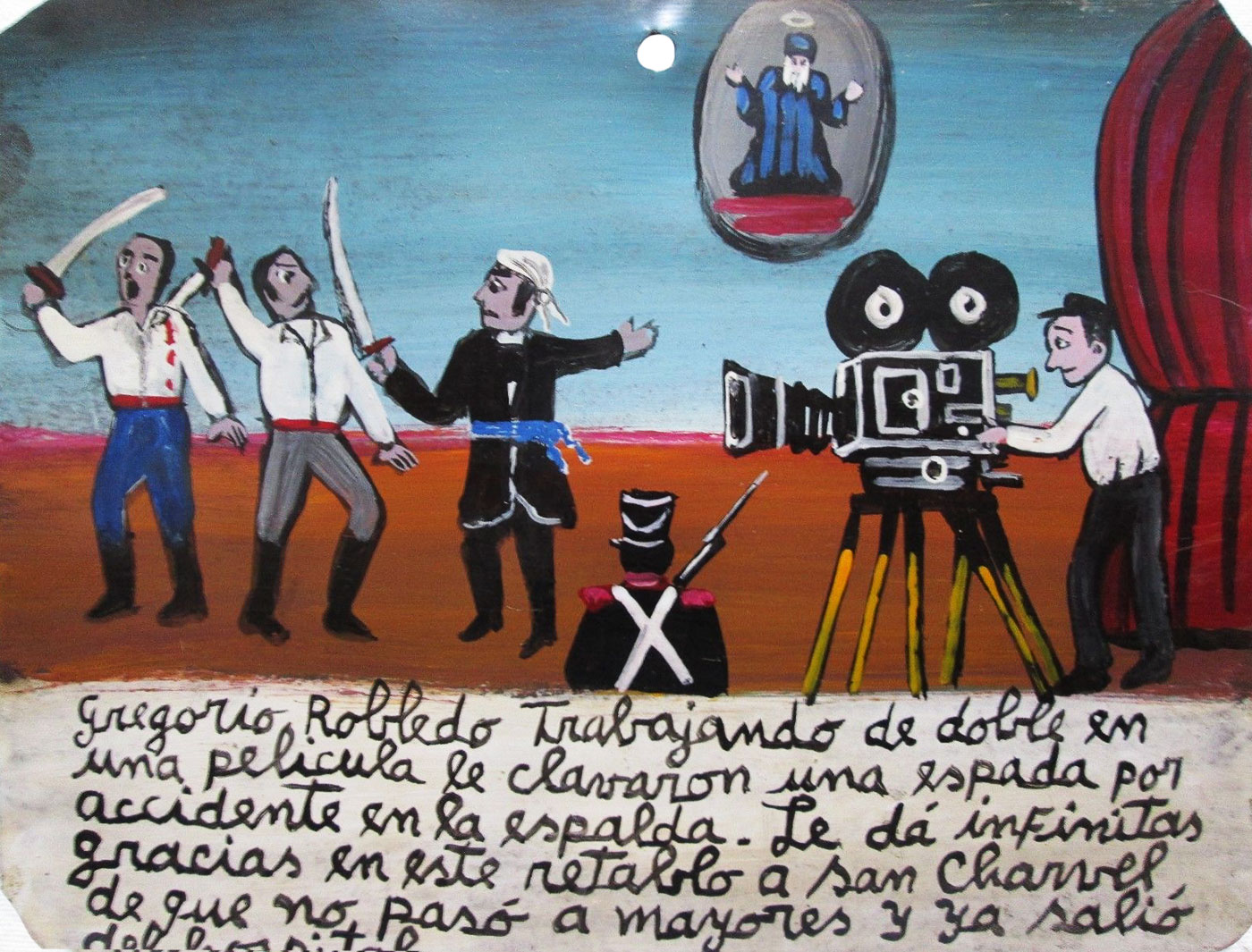 Gregorio Robledo worked as a double in a movie, and he was accidentally stabbed in the back with a sword. He gives infinite thanks to Saint Charbel with this retablo because it wasn’t very serious and he’s already got out of the hospital. 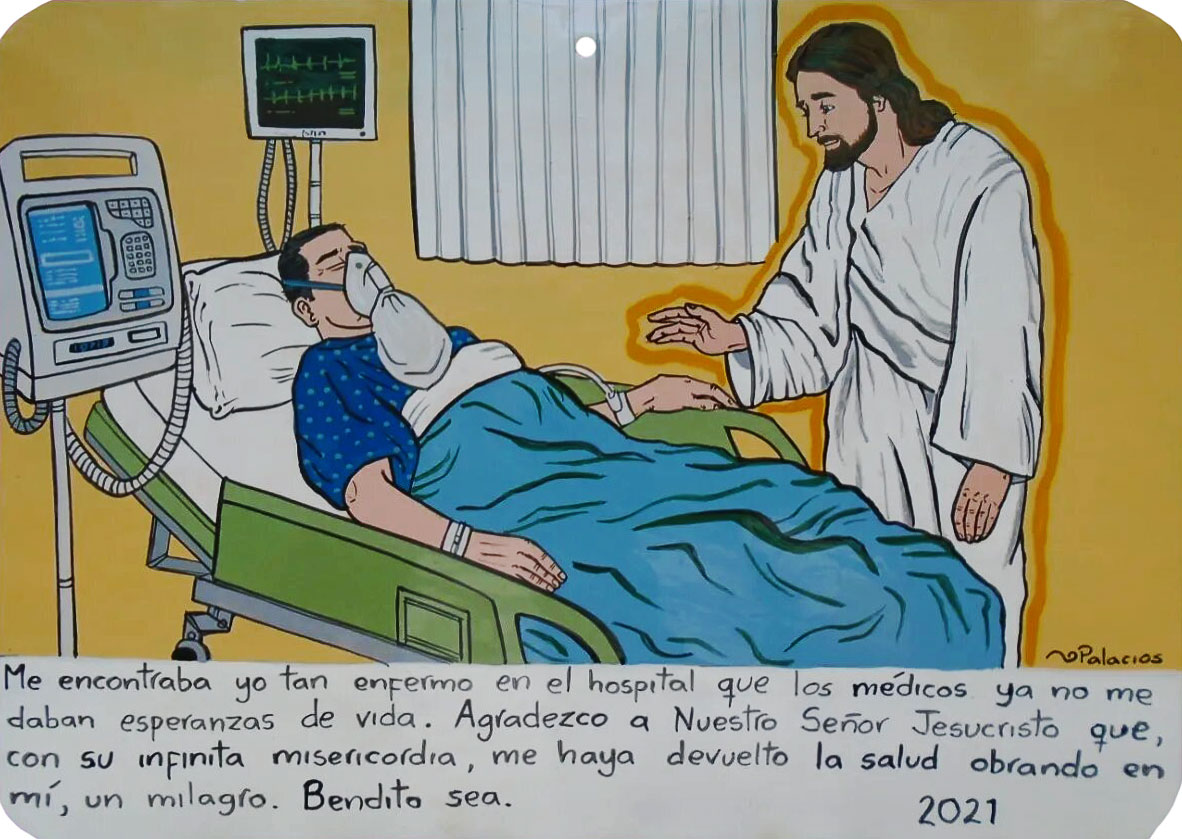 I was so ill in the hospital that the doctors didn’t have hopes to keep me alive. I thank Our Lord Jesus Christ who, in his infinite mercy, worked a miracle and brought my health back to me. May you be blessed. 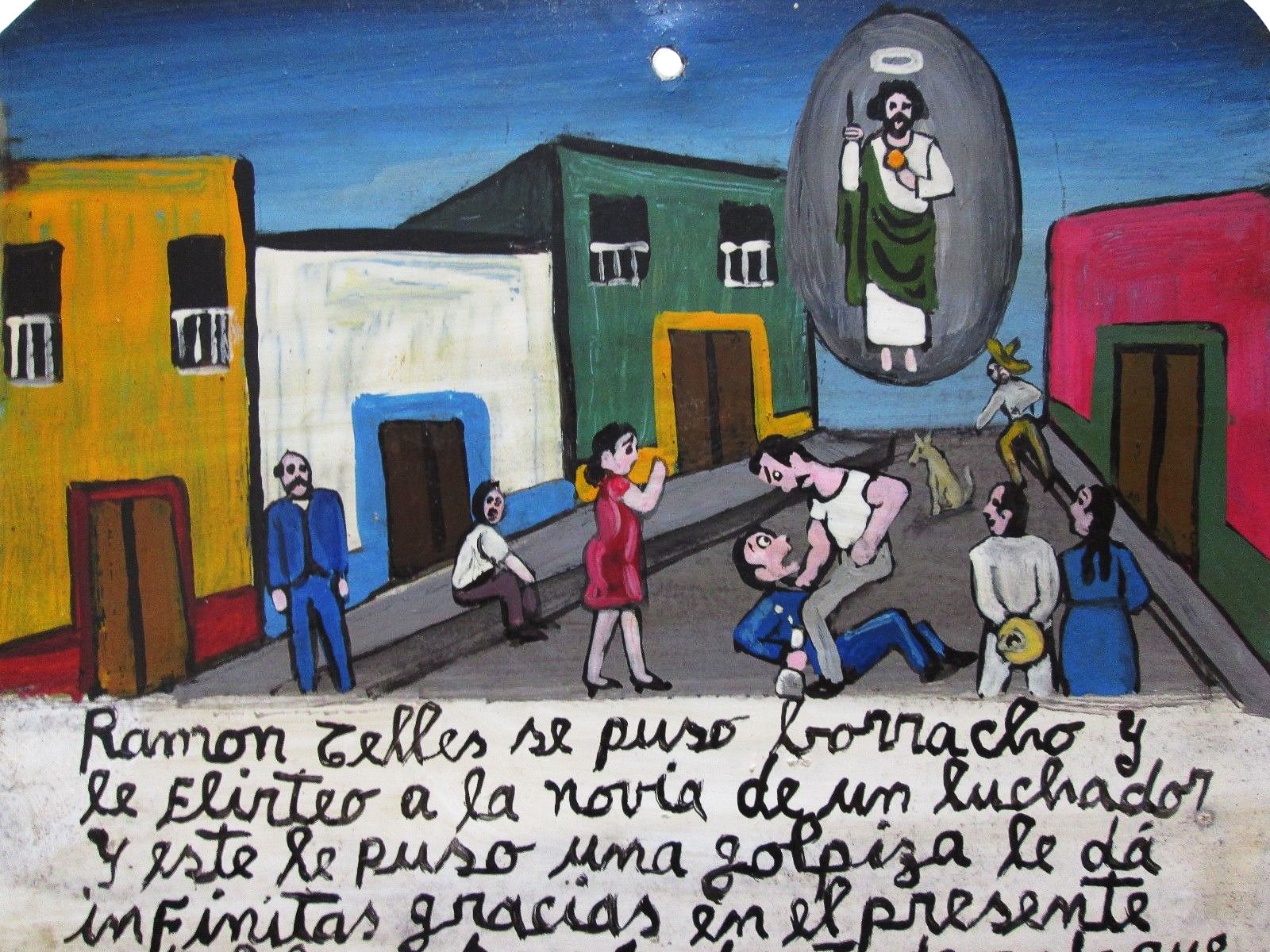 Ramon Telles got drunk and went flirting with a girlfriend of a wrestler, but the wrestler kicked his ass. He thanks Saint Jude because he just got out of the hospital… 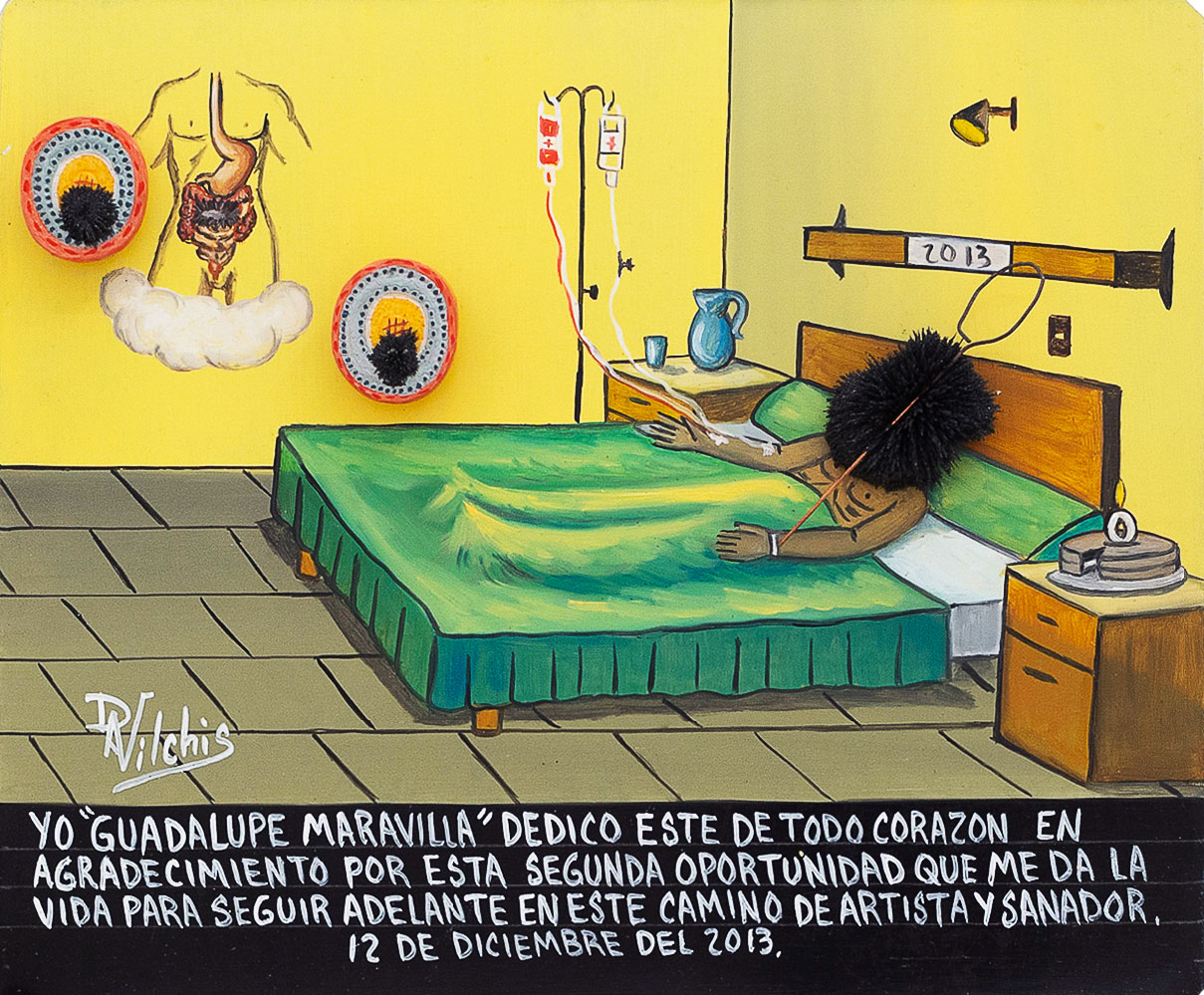 I, Guadalupe Maravilla, wholeheartedly dedicate this in gratitude for the second chance the life has given me so I could continue following my path as an artist and a healer.

Catarino Pantoja was in a tavern when his beloved ones began fighting each other. They two ended up in the hospital, along with the baby. Catarino thanks the Merciful Lord with this retablo because all three have already come out of the hospital and he managed to get rid of them.