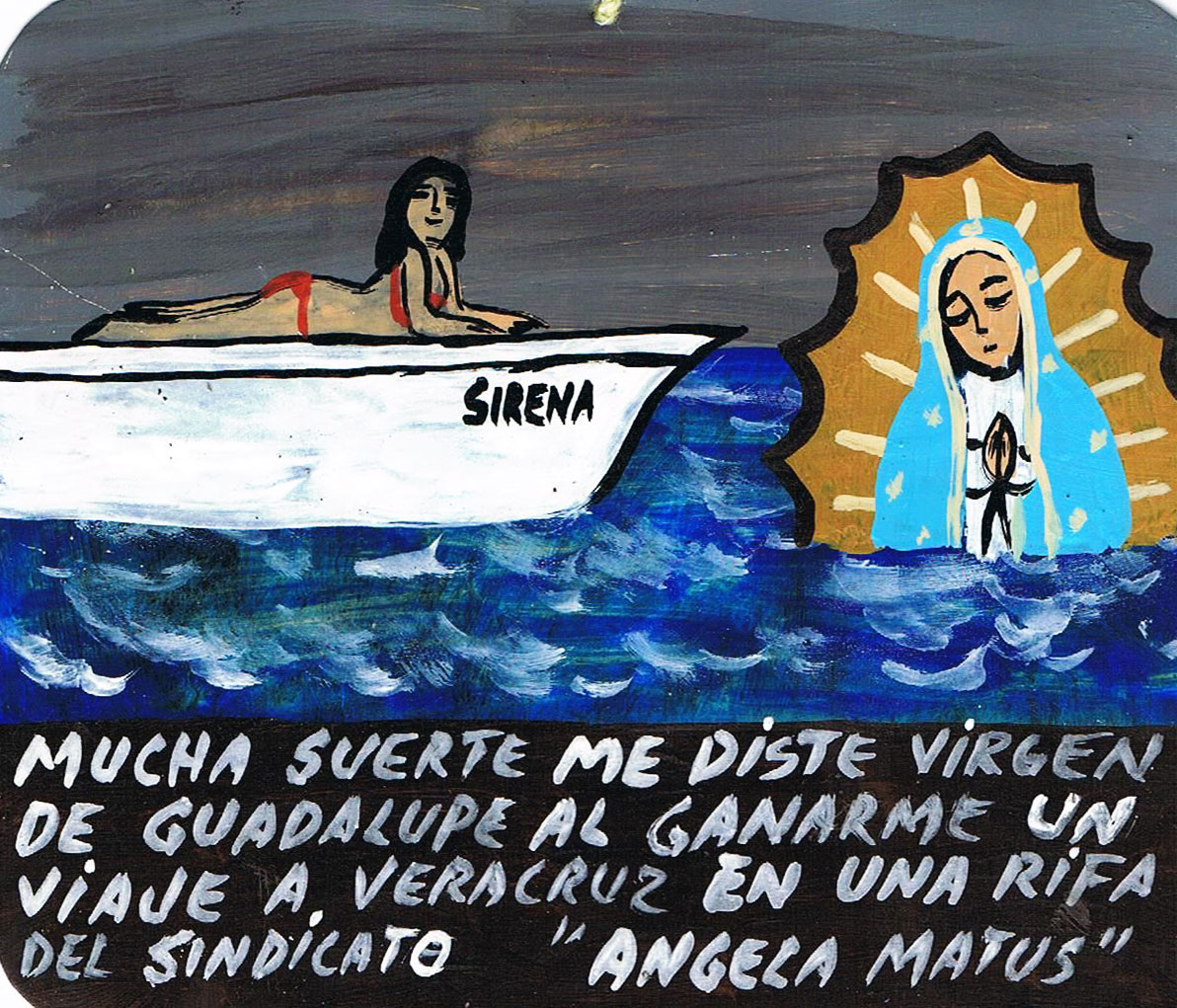 Big luck you gave me, Virgin of Guadalupe, when I won a trip to Veracruz in a union raffle 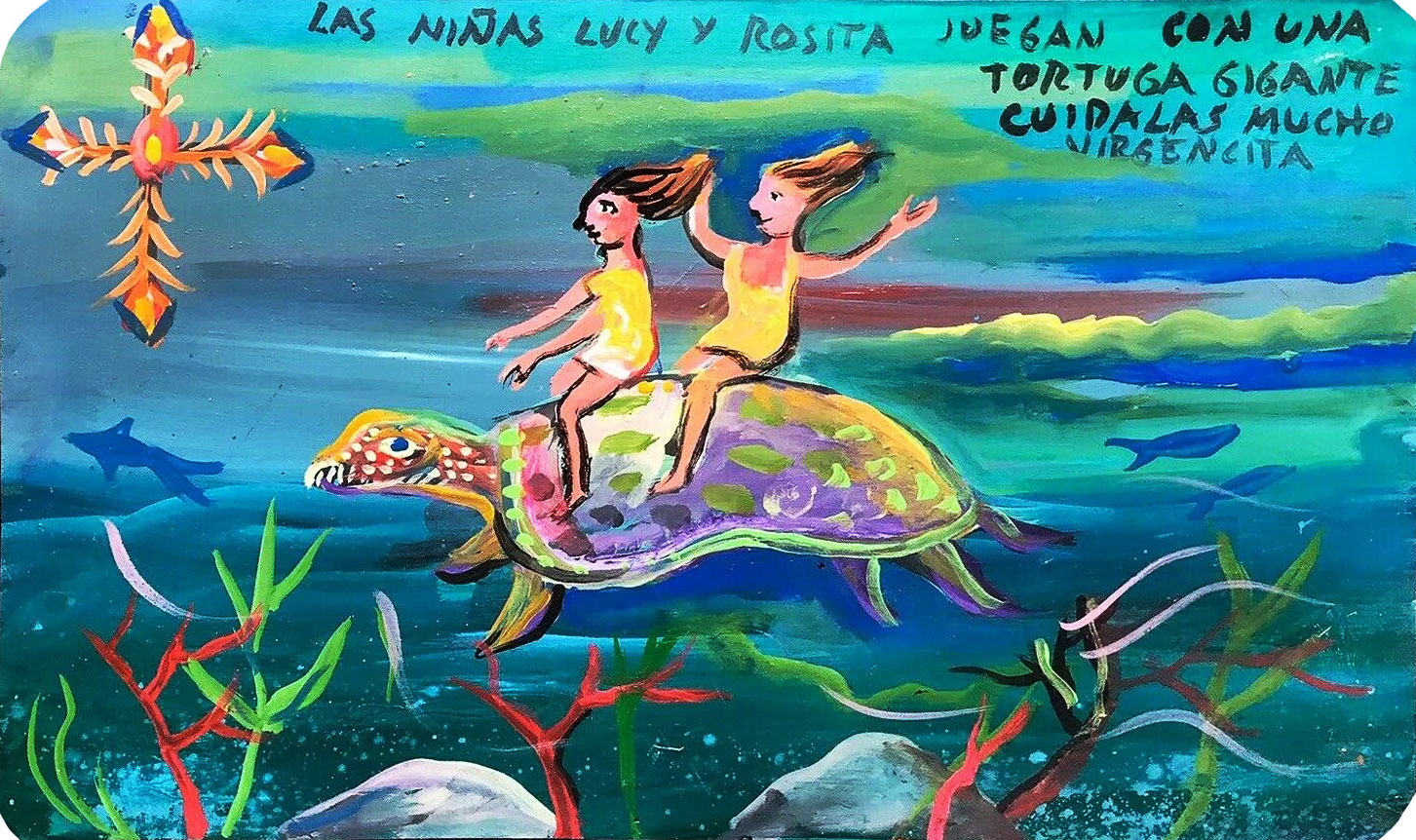 The girls Lucy and Rosita play with a gift tortoise. Look after them, Virgin. 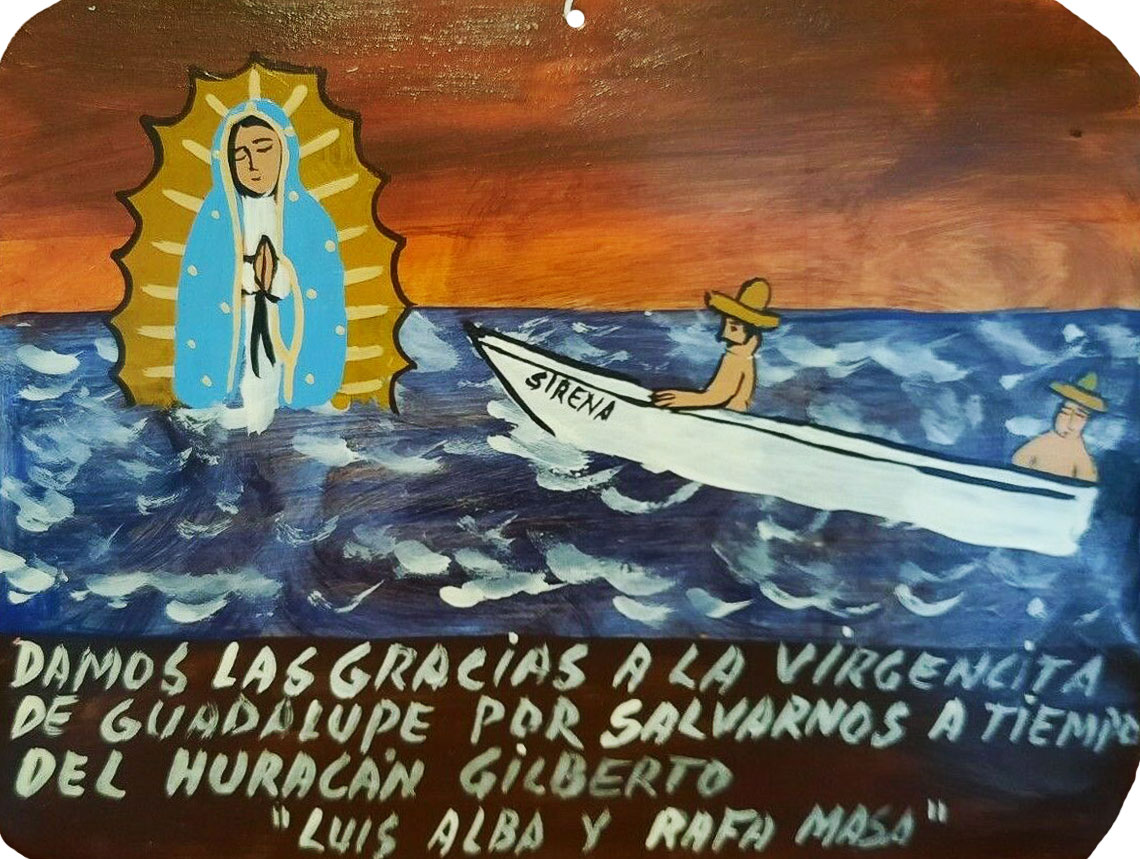 We thank the Virgin of Guadalupe for saving us during the hurricane Gilberto.

— tagged with Virgin of Guadalupe and boat, hurricane, sea, weather — # 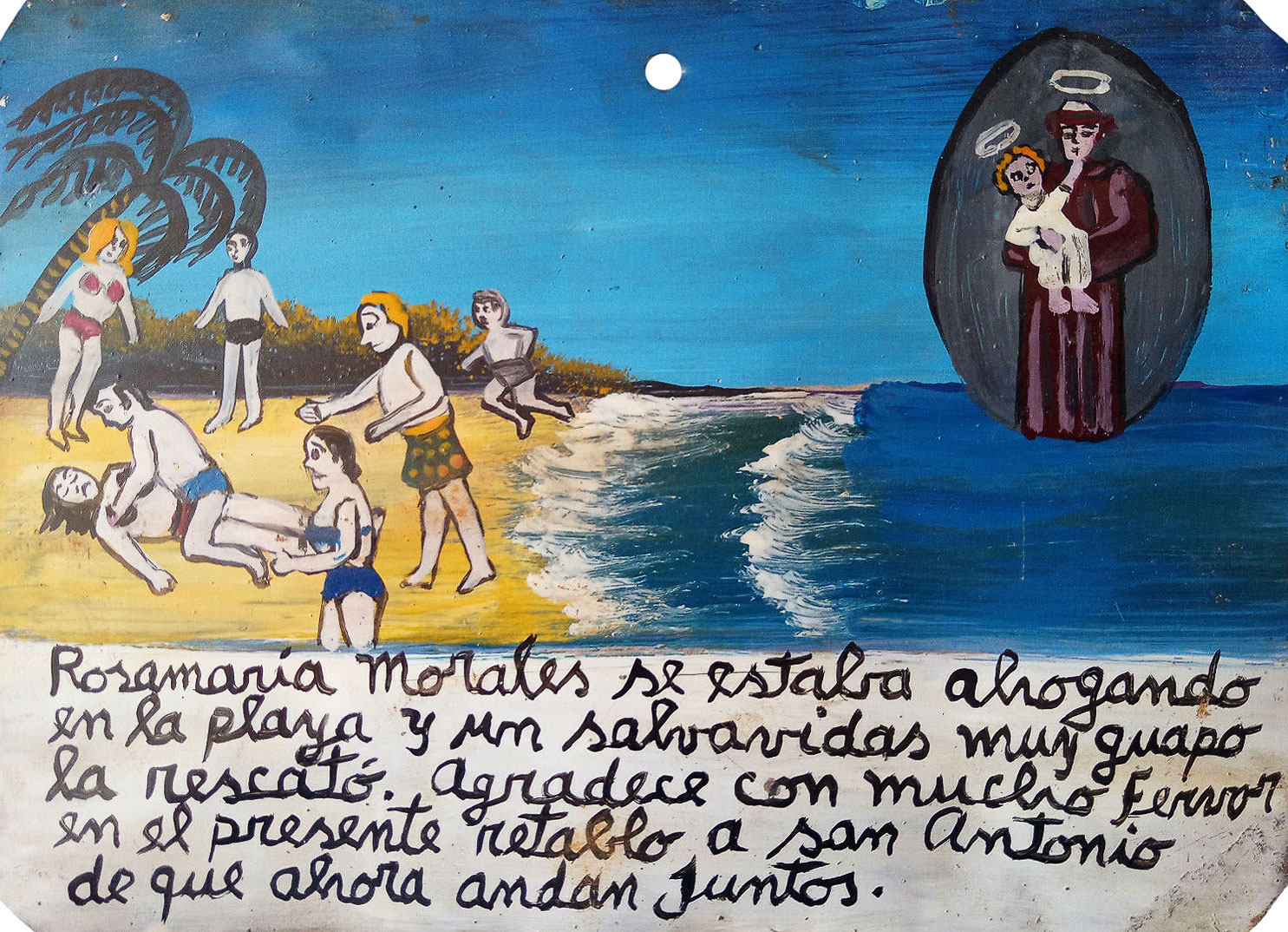 Rosamaria Morales was drowning and was saved by a very handsome lifeguard. She fervently thanks Saint Anthony with the present retablo because now they are dating. 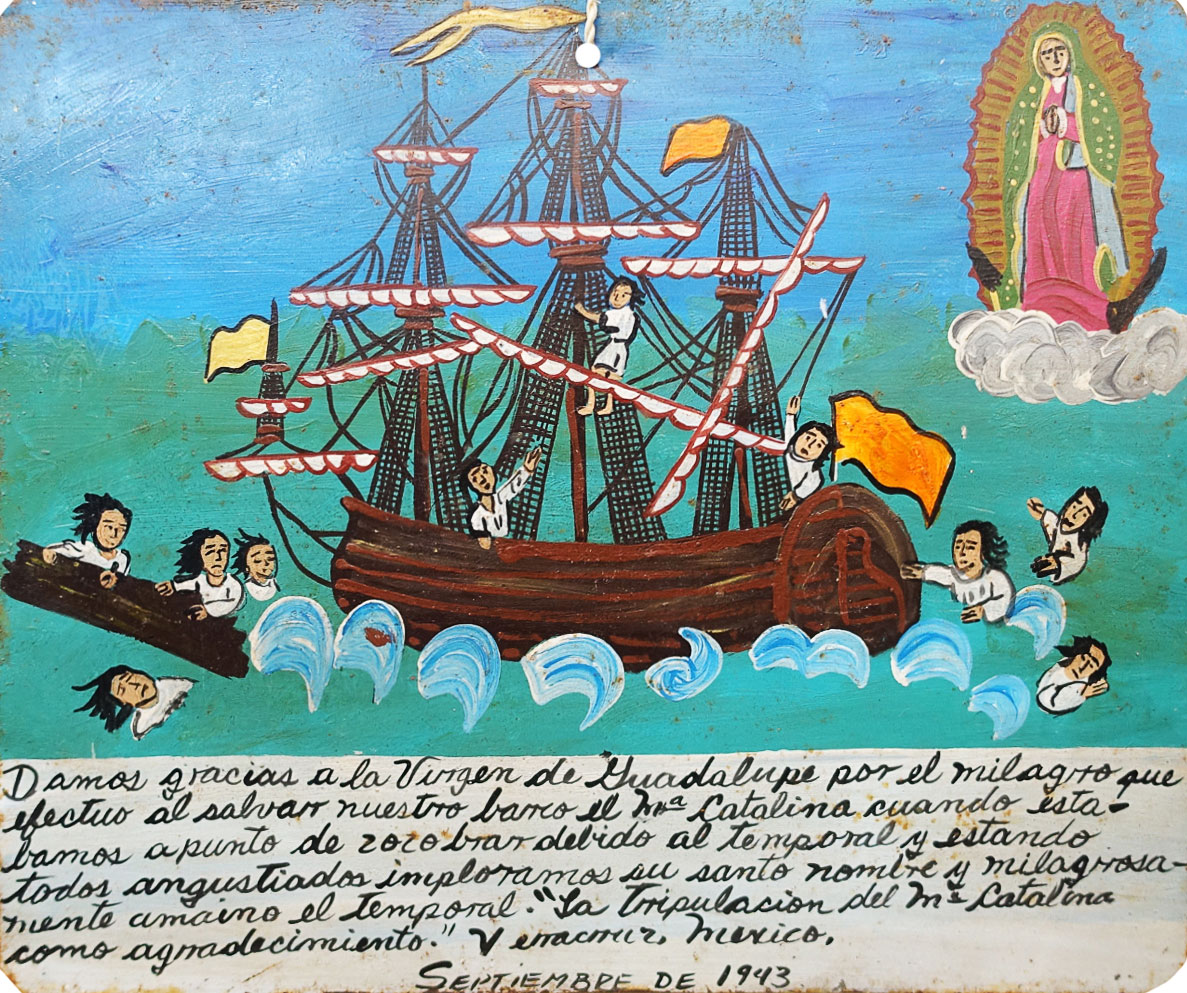 We thank the Virgin of Guadalupe for the miracle of saving our ship “Ma. Catalina” when we almost suffered shipwreck during the storm. In despair, we implored your holy name, and the storm miraculously eased off.

Gratitude from the crew of “Ma. Catalina” Veracruz, Mexico, September 1943

— tagged with Virgin of Guadalupe and sea, sea storm, shipwreck, weather and Veracruz — # 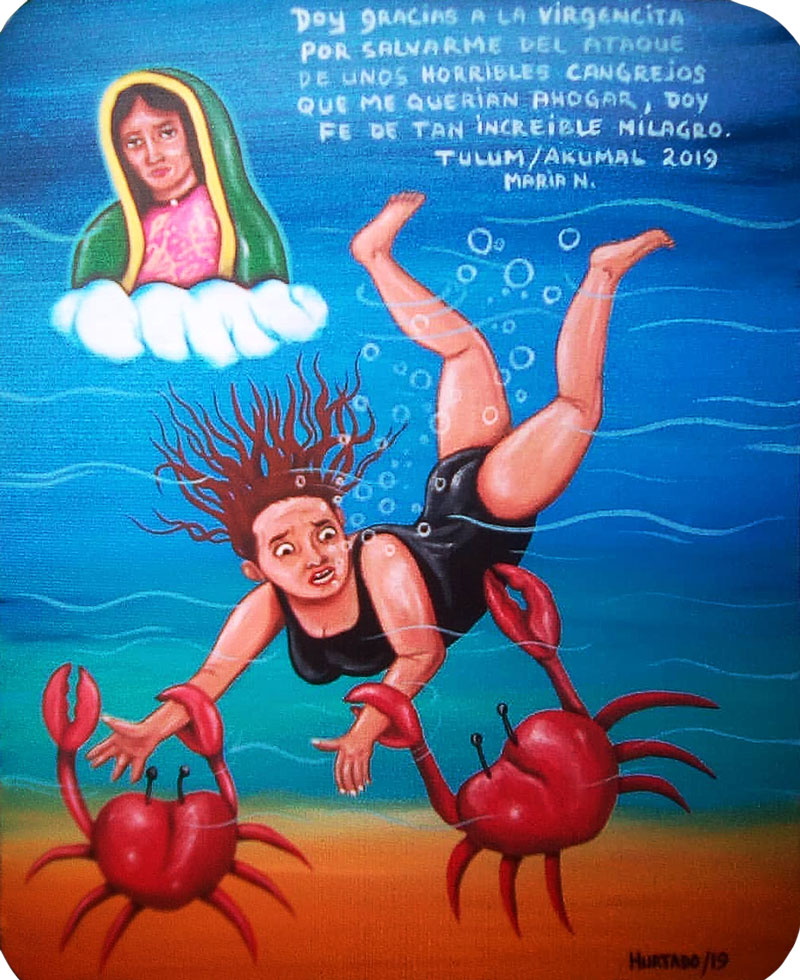 I thank the Holy Virgin for saving me from the attack of horrible crabs that wanted to drown me. I testify for such an incredible miracle.

— tagged with Virgin of Guadalupe and animals, crabs, drowning, sea and Akumal, Tulum — # 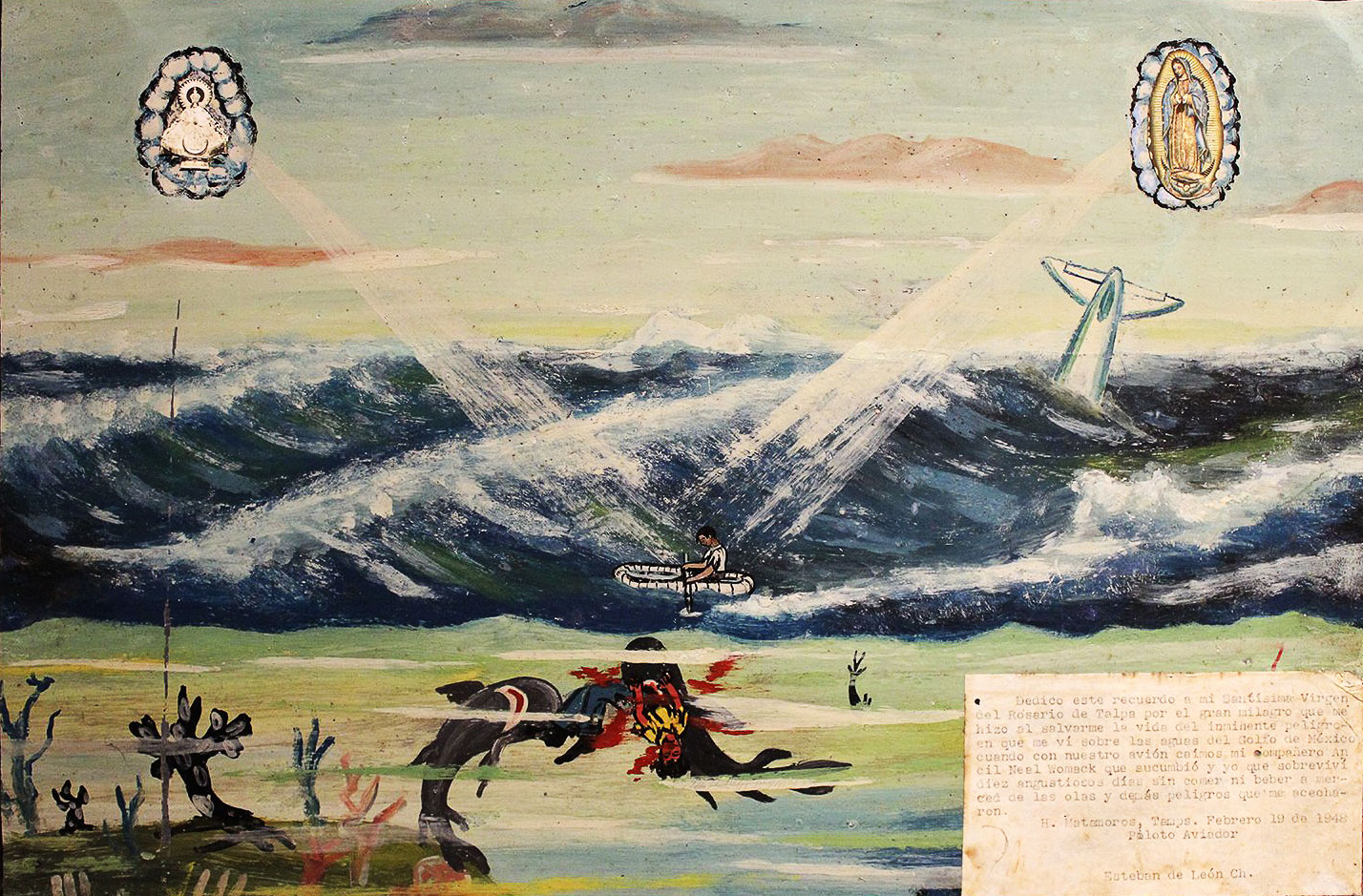 I dedicate this memory to my Holy Virgin of the Rosary from Talpa for the great miracle she worked for me by saving my life form the imminent danger when I got under the water of Mexican gulf after our plane fell down. My partner Ancil Neal Womack died and I survived ten distressed days, by the mercy of the waves, without food or water, not to mention other dangers that pursued me.

— tagged with Virgin of Guadalupe, Virgin of the Rosary and accident, airplanes, crash, death, pilots, sea and Matamoros, Tamaulipas — # 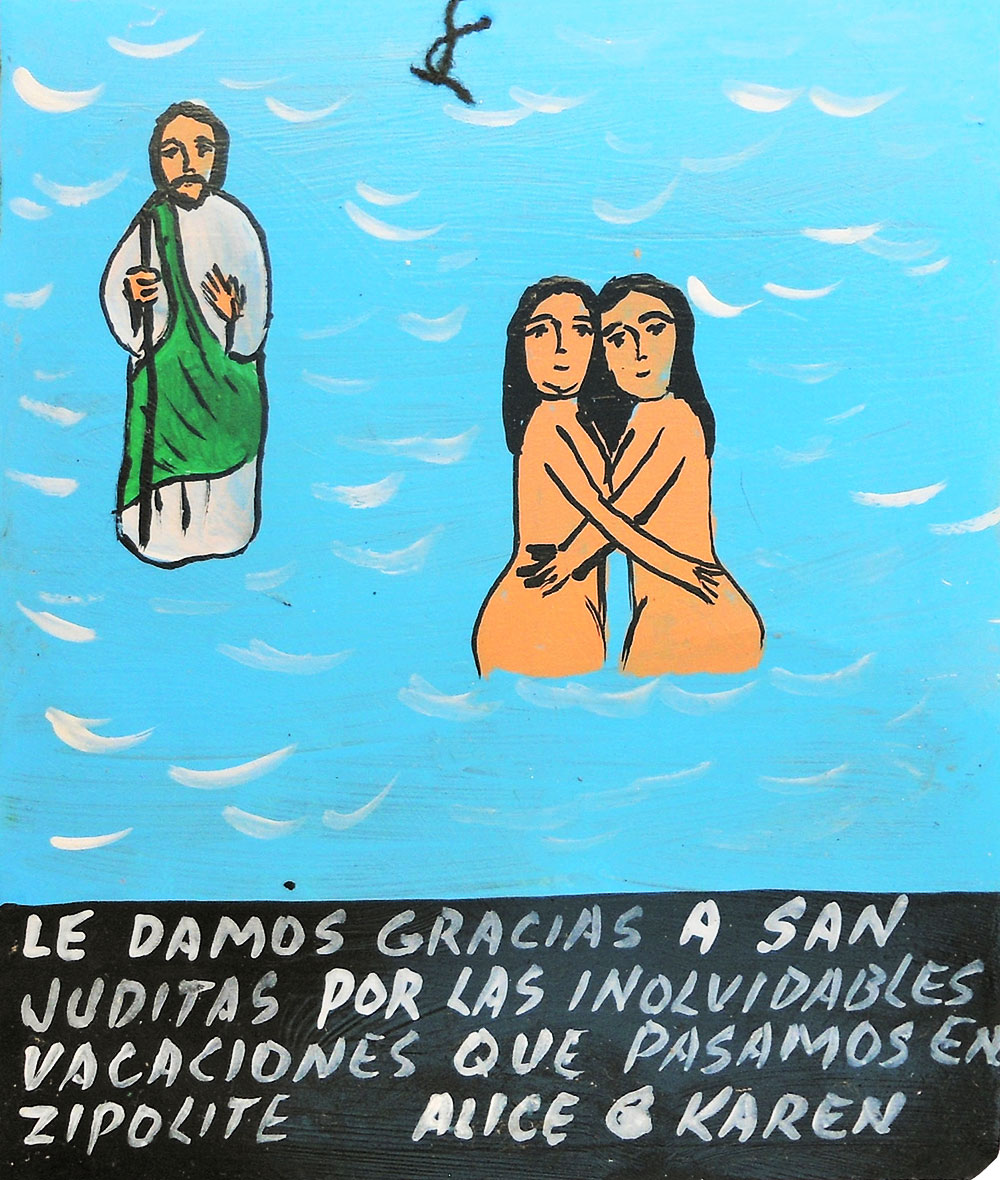 We thank Saint Jude for the incredible vacation we spent in Zipolite.

— tagged with Saint Jude Thaddeus and sea, vacation and Zipolite — # 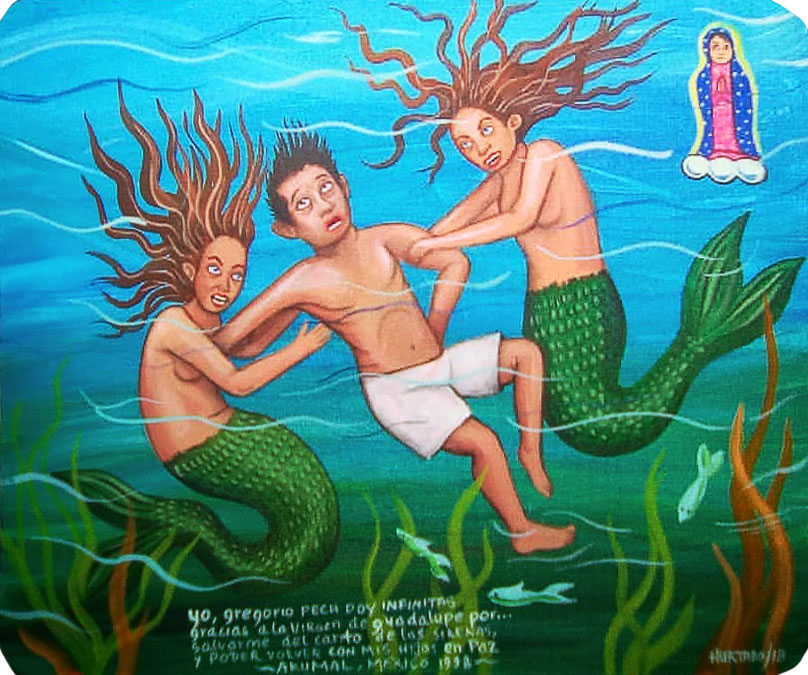 I, Gregorio Pech, infinitely thank the Virgin of Guadalupe for saving me from the mermaids’ charms so I was able to get back to my kids.

— tagged with Virgin of Guadalupe and mermaids, sea and Akumal — # 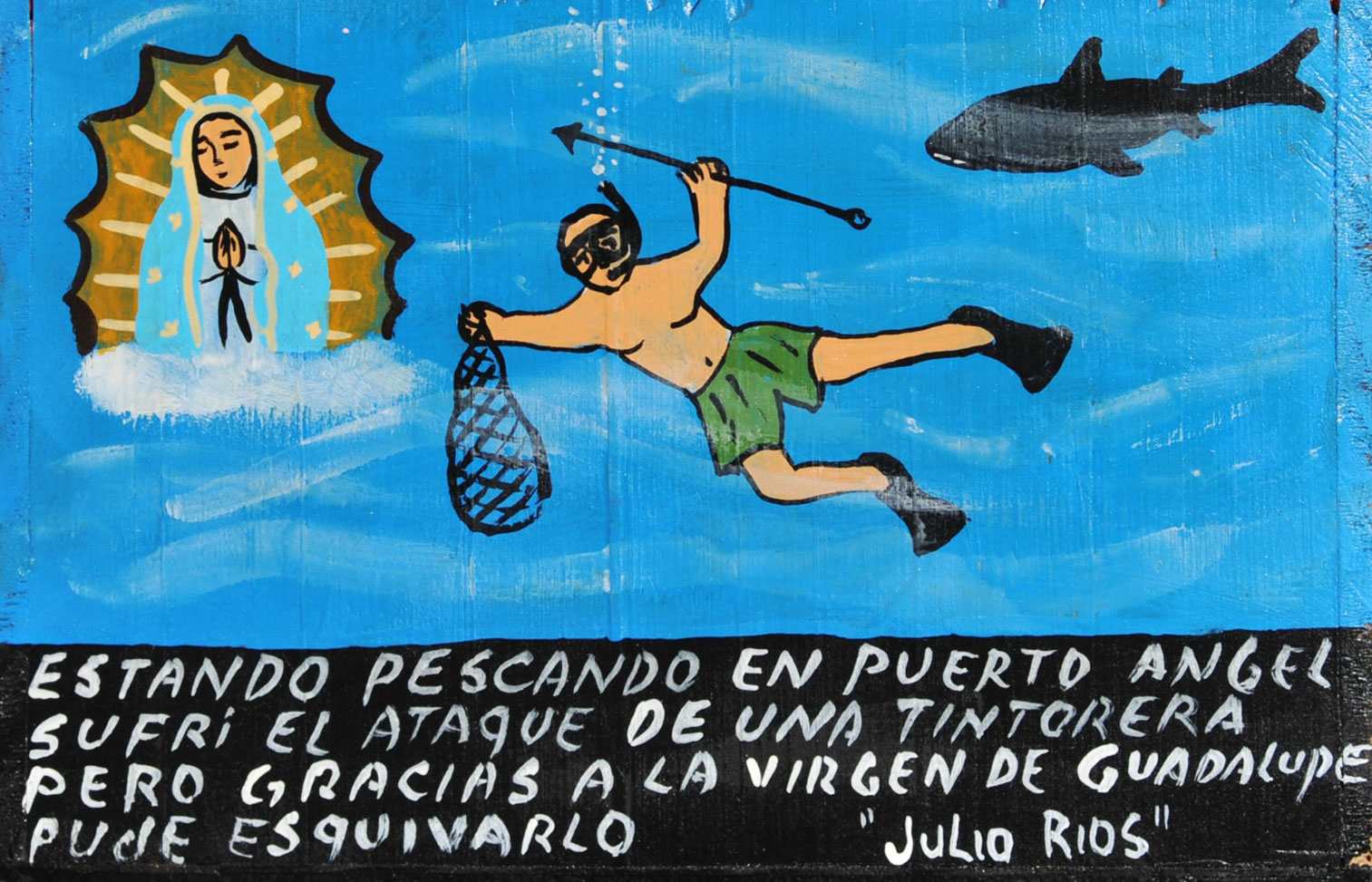 I was fishing in Puerto Angel when I was attacked by a blu shark but thanks to the Virgin of Guadalupe I was able to dodge.

— tagged with Virgin of Guadalupe and fish, fishermen, sea, sharks and Puerto Ángel — # 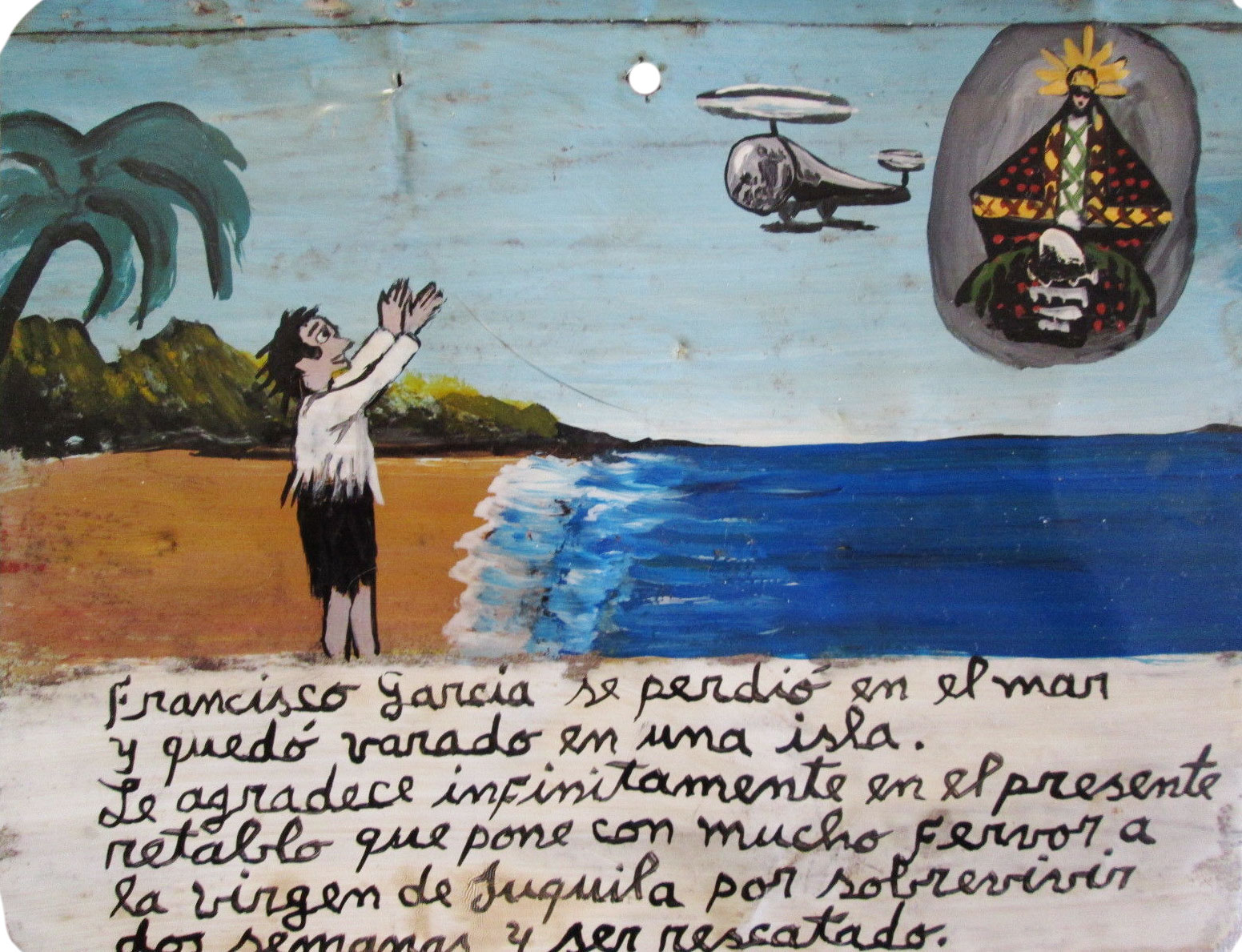 Fransisco Garcia lost in the sea and was cast up on an island. He’s infinitely grateful to the Virgin of Juquila with the present retablo because he survived two weeks there and was saved.

— tagged with Virgin of Juquila and island, lost, sea — # 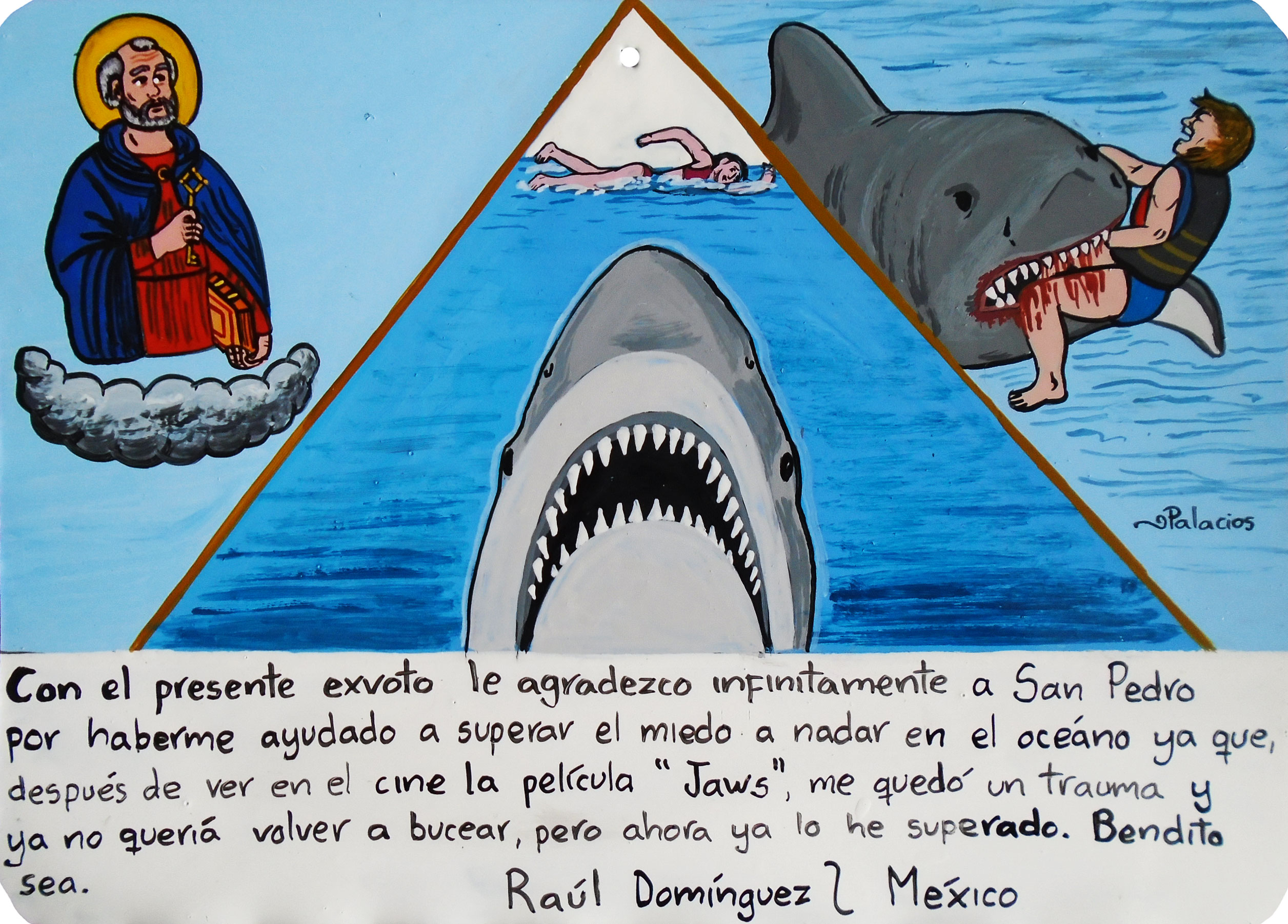 With the present retablo, I infinitely thank Saint Peter for helping me to overcome the fear of swimming in the ocean because after watching the film “Jaws” in the movies I got a trauma and wouldn’t go swimming. But I’ve overcome it now. May you be blessed.

On September 11, 2020, James Eddy and his son Felix, age 16, went swimming at Bocana Beach. Felix reminded his father about the strong ocean current at the north end of the beach and insisted they both stay close to shore but James, as stubborn as a mule, and sometimes as stupid, did not heed his wise son’s warning about the currents and pushed out beyond the break. Within minutes James was upside down and ass backwards inside the barrel of a large wave. He tried to swim perpendicular to the current but it was too strong and each time he surfaced for air he was pummeled by another wave. James knew he was in big trouble so he raised his hands high over his head, screamed out for help and prayed hard for a miracle. After several more minutes, when he could barely keep his head above water, he saw Viridiana Martinez Rios paddling up behind him with a surf board and Flora Liz Martinez Rios wading outside the rocks. He grabbed onto the board and Viridiana steered him through the rocks and pushed him safely back to shore. James gives infinite thanks to the Rios family for saving his life that day. This retablo was created in honor of their heroic act and in commemoration of James’ miracle.