I thank my Guardian angel for holding me from killing my friends who come visit the artist and keep me from painting. 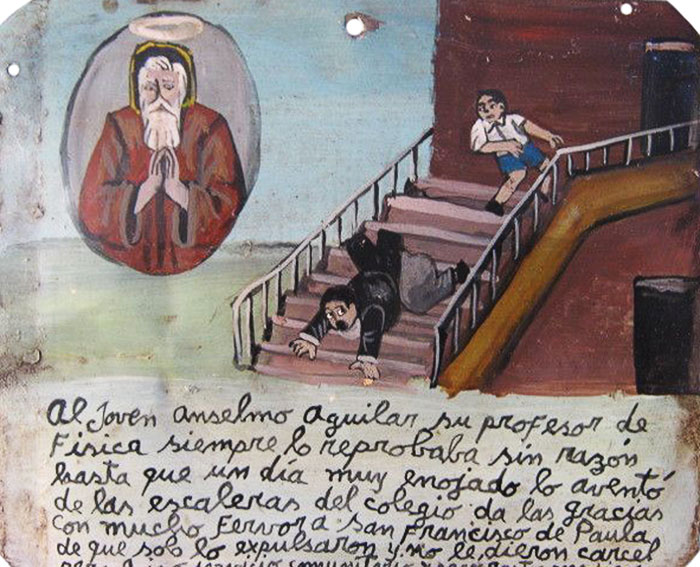 Dulce Maria Morales’ mother-in-law doña Martiniana used to have anger attacks during which she seemed demoniacal. The father Ruperto told Dulce to pour holy water in the mother-in-law’s tea and to pray to the Virgin of Guadalupe. Some time later she changed. Dulce thanks Our Lady for her help.

My father caught me when I was with Sonia. He was so furious he kicked me out of the house. I was all alone and implored the Virgin, and my father forgave me. He accepted me as I am, and I thank for that. I was born that way and cannot change.

— tagged with Virgin of Guadalupe and anger, lesbians, love, love without frontiers, parents and children, tits and Mexico City, Polanco — # 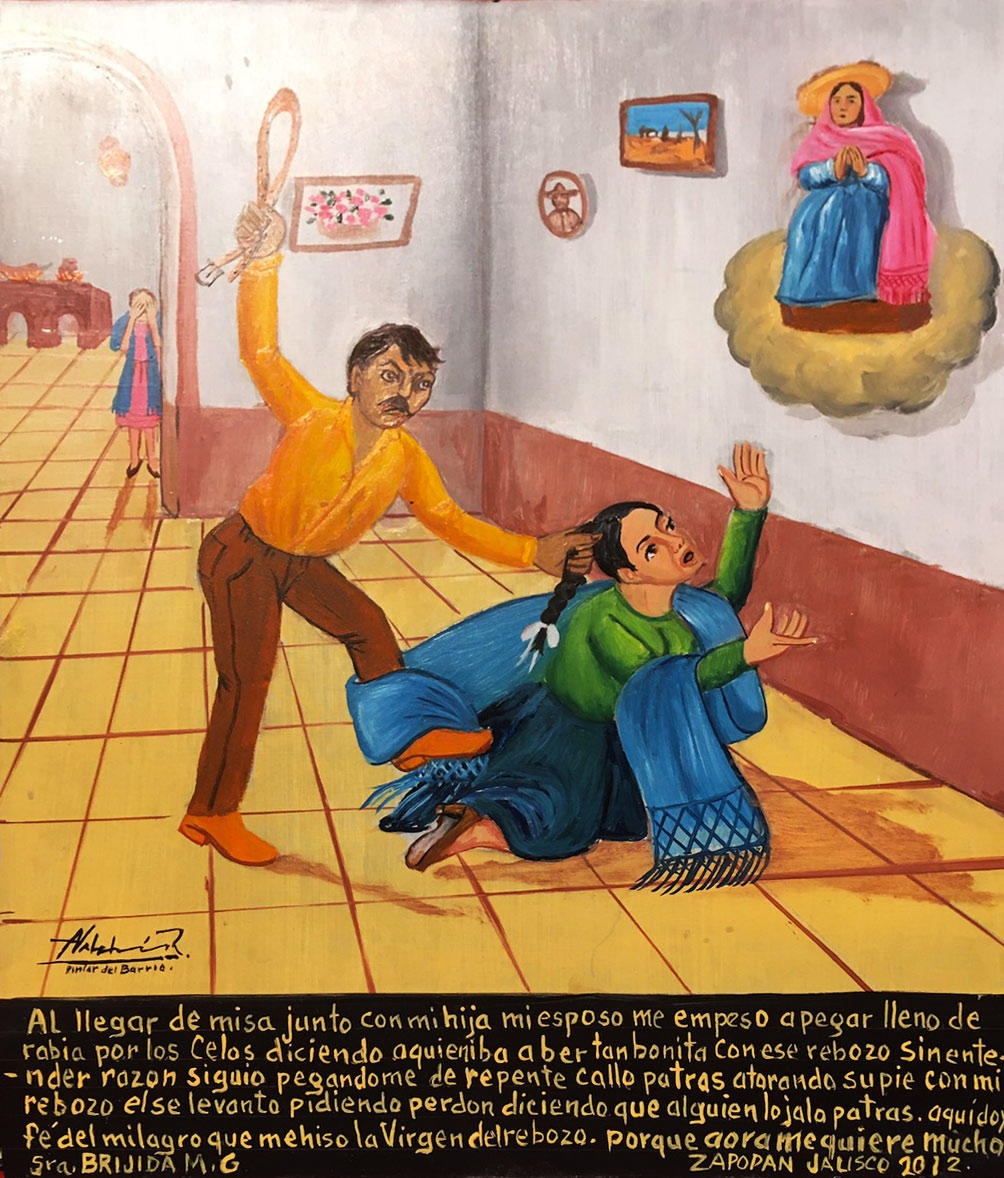 When I came back from mass with my daughter, my husband, full of rage, began to beat me out of jealousy telling me “Whom you’re going to see dressed up so nicely with this shawl?” He kept on beating me without any reason. Suddenly he fell back when his leg got tangled in my shawl. He stood up asking forgiveness. He said someone had pulled him back. Here I testify the miracle made for me by the Virgin of the Shawl because now my husband loves me very much.

— tagged with Virgin of the Shawl and anger, children, clothes, husbands and wives, jealousy, shawl, violence and Jalisco, Zapopan — # 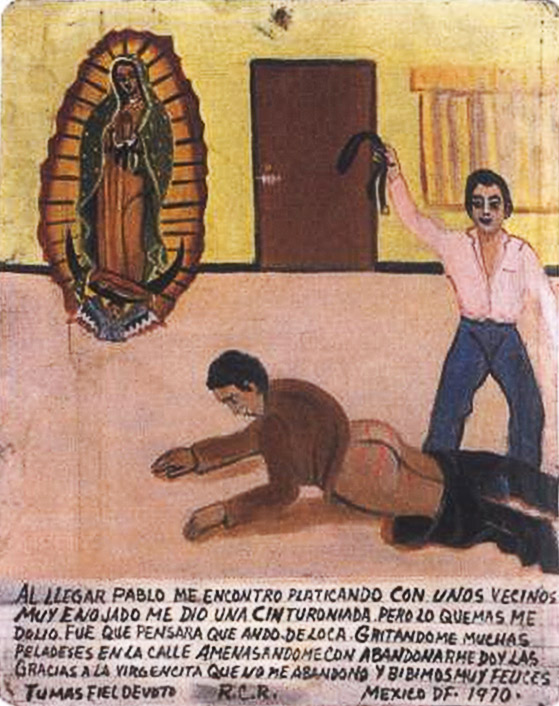 When Pablo came home he saw me chatting with some neighbors. He got angry and started spanking me with his belt. But I felt much more pain because Pablo though I was cheating on him. He yelled at me, cursing with horrible words, and threatened to leave me. I thank the Virgin of Guadalupe because he didn’t dump me and we live happily together. 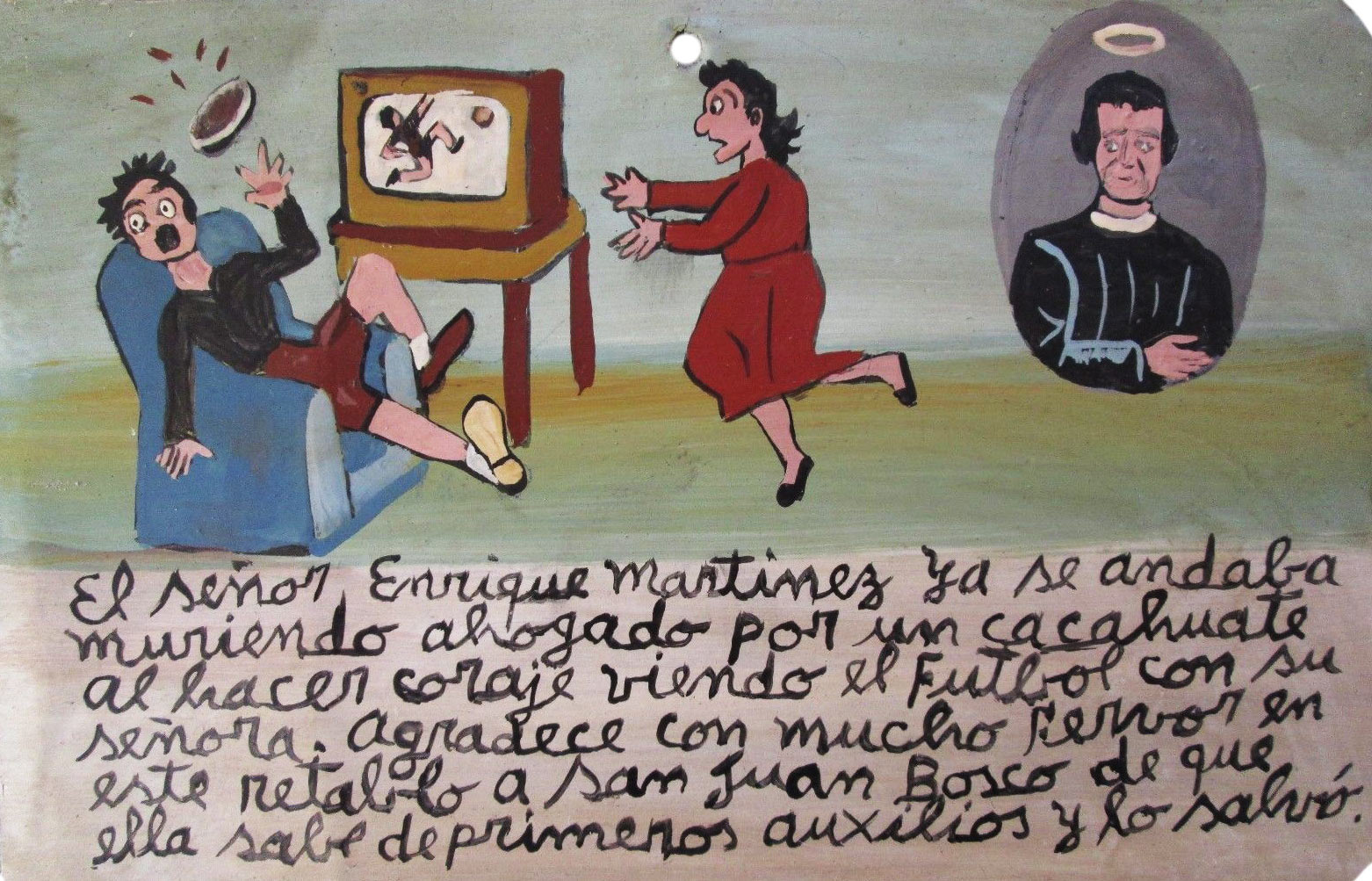 Enrique Martinez was watching soccer with his lady. He was going mad and almost died chocking on a peanut. He thanks Saint Juan Bosch with this retablo because his wife knew about first aid and saved him. 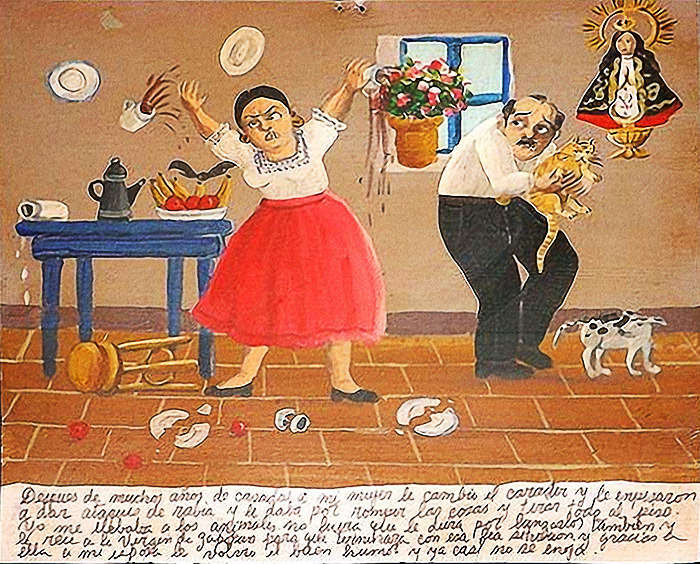 After many years of marriage my wife’s character changed. She had rage attacks in which she was throwing and braking everything she had around her. I took the animals so she wouldn’t throw them and prayed the Virgin of Zapopan to stop this nightmare. Thanks to the Virgin my wife came back to her good mood, and now she’s almost never angry.

— tagged with Virgin of Zapopan and anger, animals, cats, dogs, husbands and wives — # 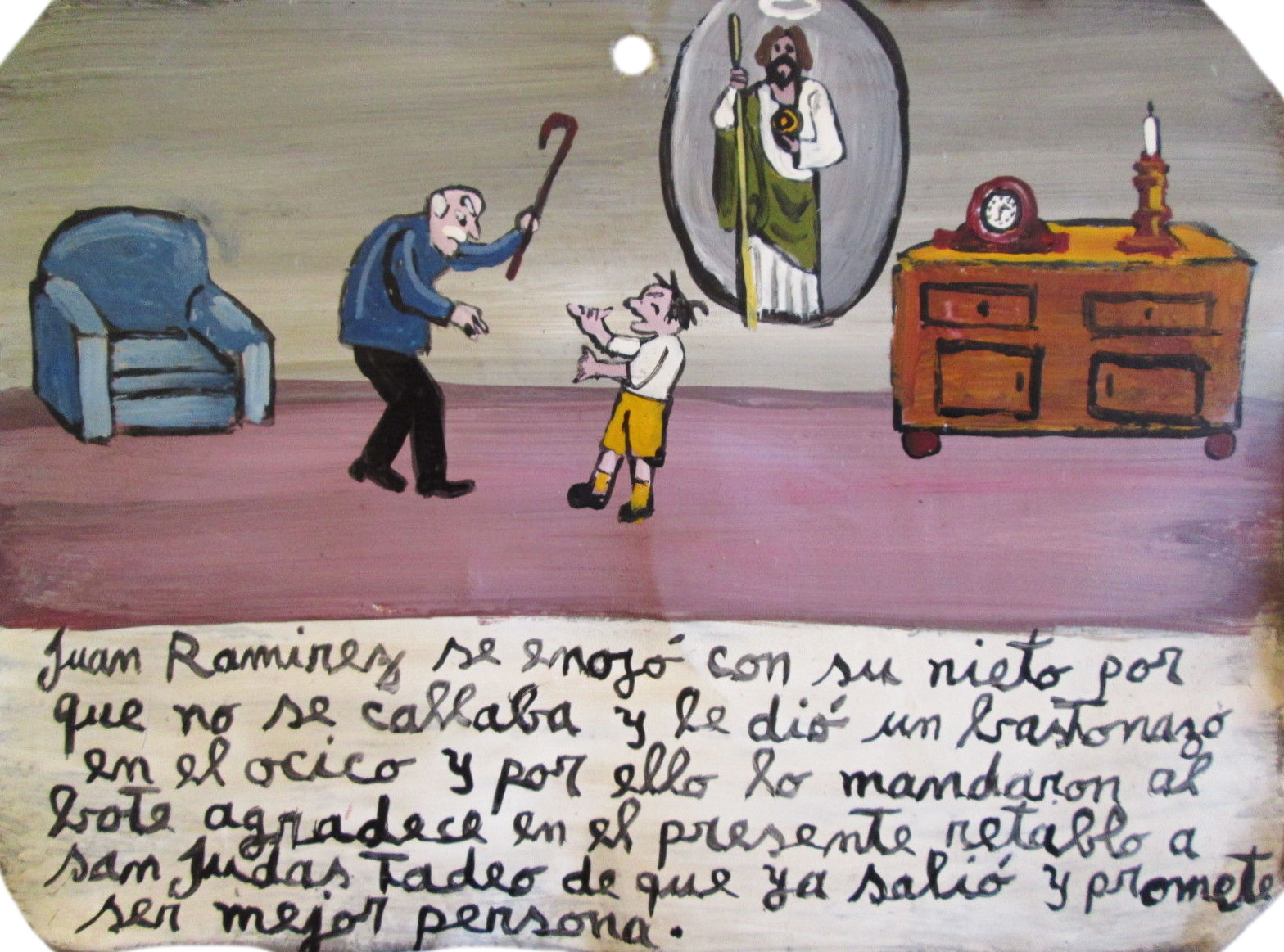 Juan Ramirez got angry with his grandson who wouldn’t quiet down and hit him in the mug with a stick. He got in jail for that. He thanks Saint Jude Thaddeus with this retablo for getting out and promises to be a better person.

I thank the Virgin of Guadalupe for saving me from the death when my buddy stabbed me. He was very angry after hearing that I was in love with his wife which was not true. 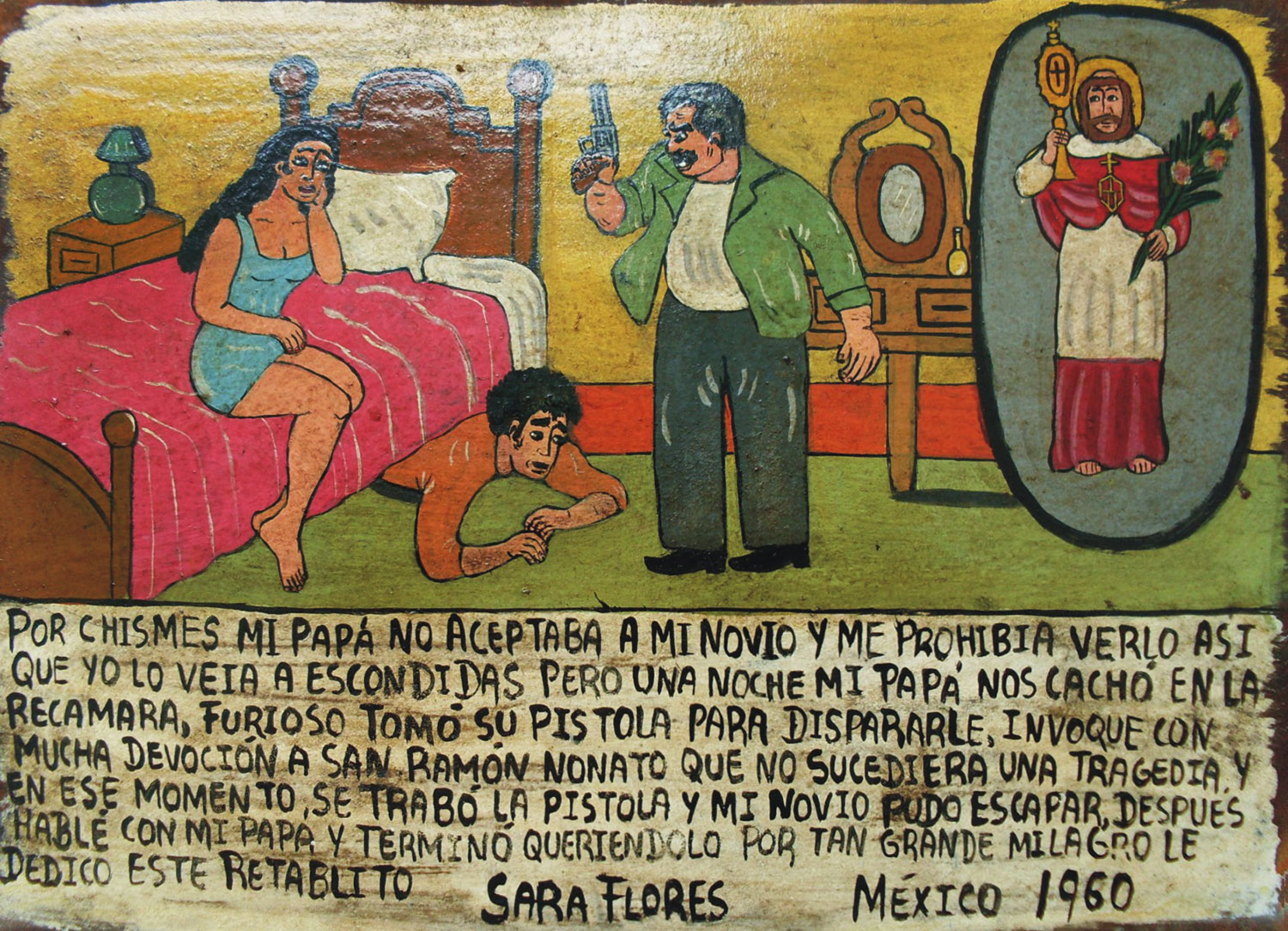 Because of rumors my father didn’t accept my boyfriend and even forbade me to see him. But I still met with him secretly. However, one night my father caught us in my bedroom. He was furious, he grabbed his pistol to shoot my boyfriend. I implored Saint Raymond Nonnatus to not let a tragedy happen. The pistol misfired, and my boyfriend managed to escape. Afterwards, I spoke with my father, and he ended up liking my boyfriend. I dedicate this ex-voto for such a great miracle. 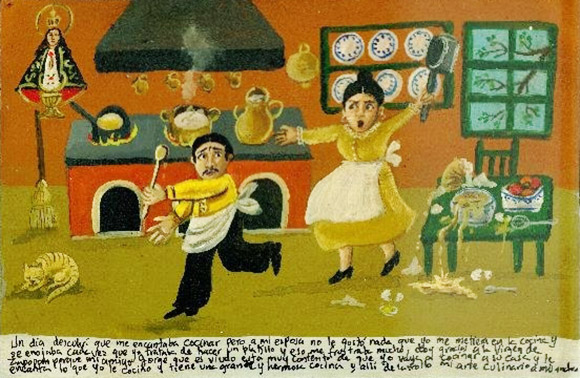 One day I found out that I love to cook. But my wife wasn’t happy at all of having my at the kitchen. Every time I tried to make a wonderful dish, she used to get angry. It was frustrating. I thank the Virgin of Guadalupe because my friend Jorge, who is a widower, is very happy with letting me use his kitchen. He has a beautiful and spacious kitchen, and he loves what I cook. So there I can develop my culinary art as I wish. 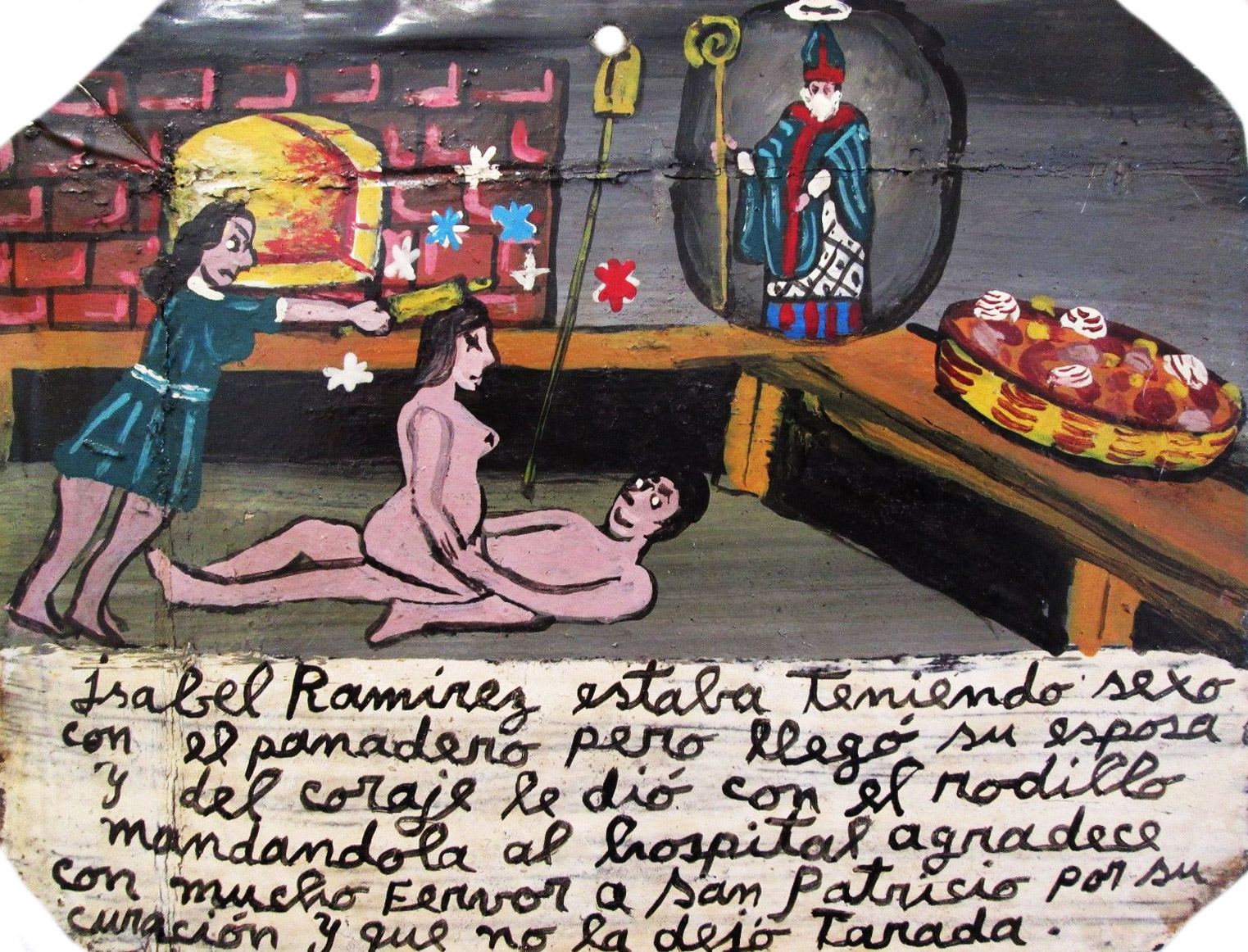 Isabel Ramirez was having sex with the baker. But then came his wife and in anger hit Isabel with a rolling pin sending her to the hospital. Isabel thanks Saint Patrick for her recovery and for she didn’t become idiot.