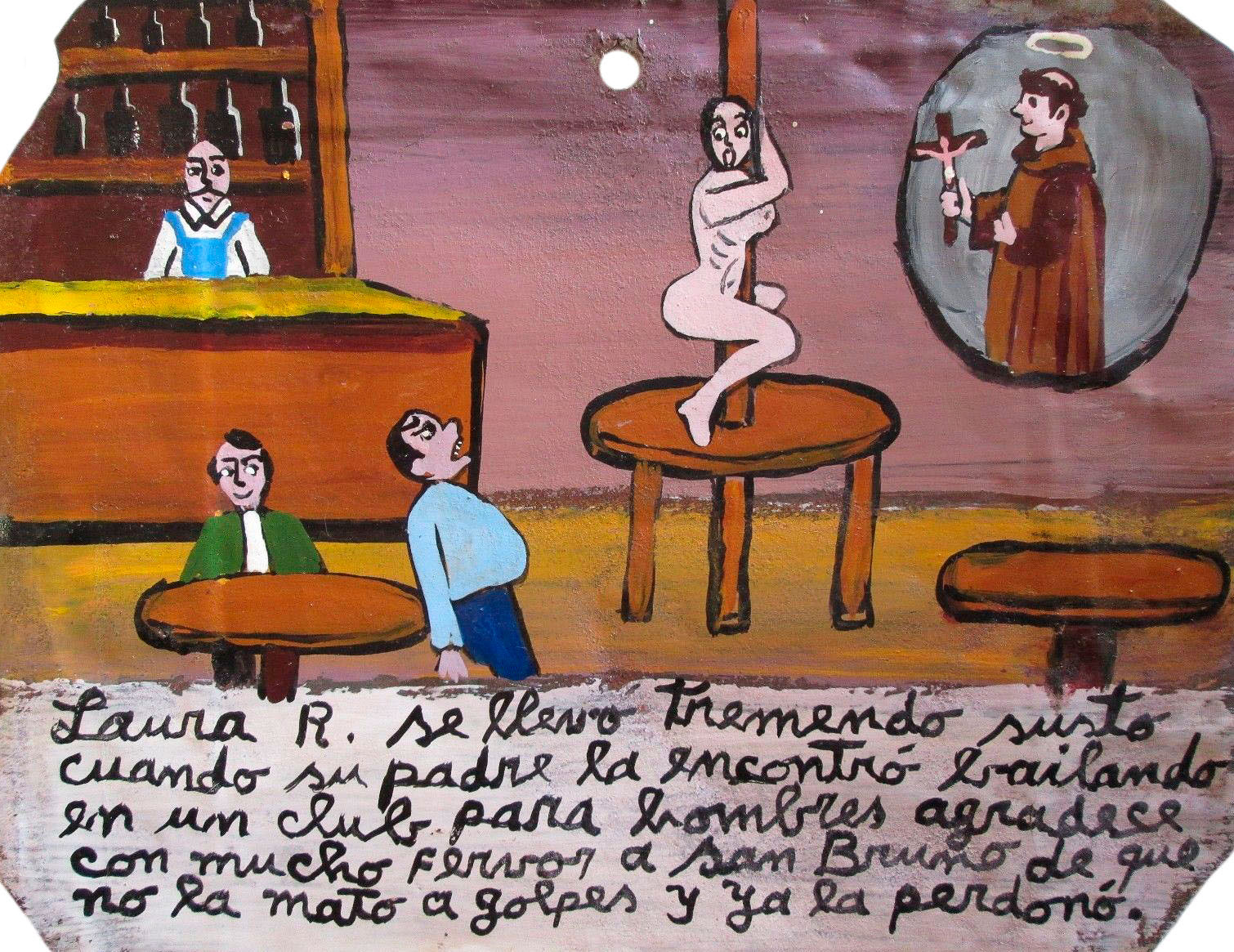 Laura R. got tremendously scared when her father caught her dancing in a club for men. She fervently thanks Saint Bruno for he didn’t beat her to death and already forgave her.

— tagged with Saint Bruno and club, parents and children, striptease — # 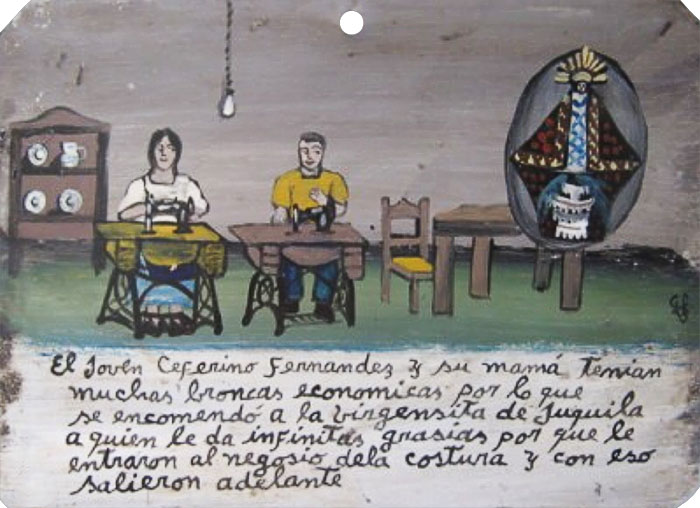 A young man Ceferino Fernandez and his mom had a lot of financial problems. He entrusted himself to the Virgin of Juquila whom he gives infinite thanks because they started a sewing business and supported themselves with it.

— tagged with Virgin of Juquila and business, parents and children, poverty, sewing — # 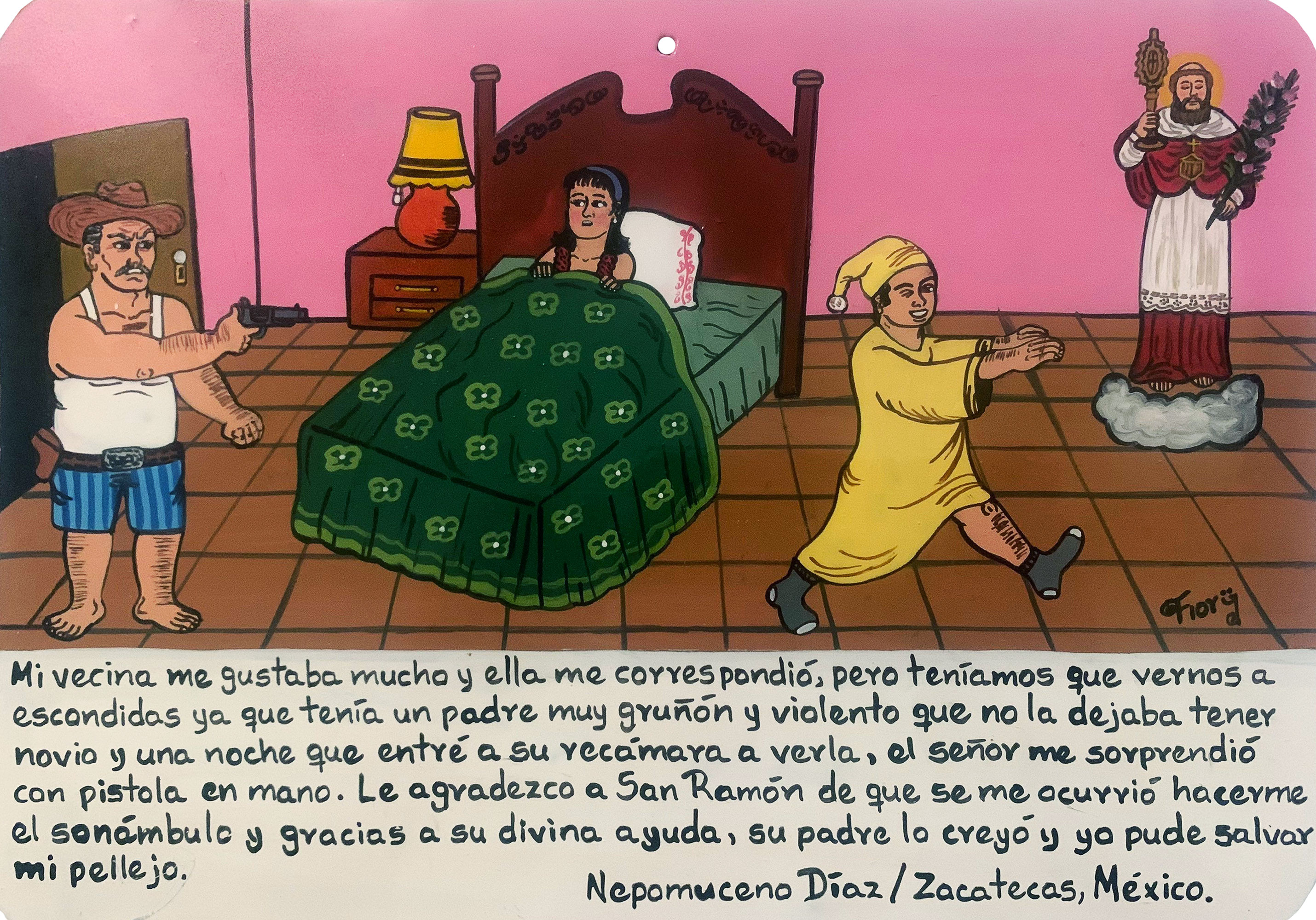 I liked my neighbor very much, and she responded me. But we were secretly seeing each other for she had a grumpy and violent father who didn’t let her to have a boyfriend. One night I climbed to her room to see her, and her father caught us by surprise with a pistol in his hand. I thank Saint Raymond for illuminating me to act like a sleep-walker. With his divine help, her father believed it, so I saved my skin. 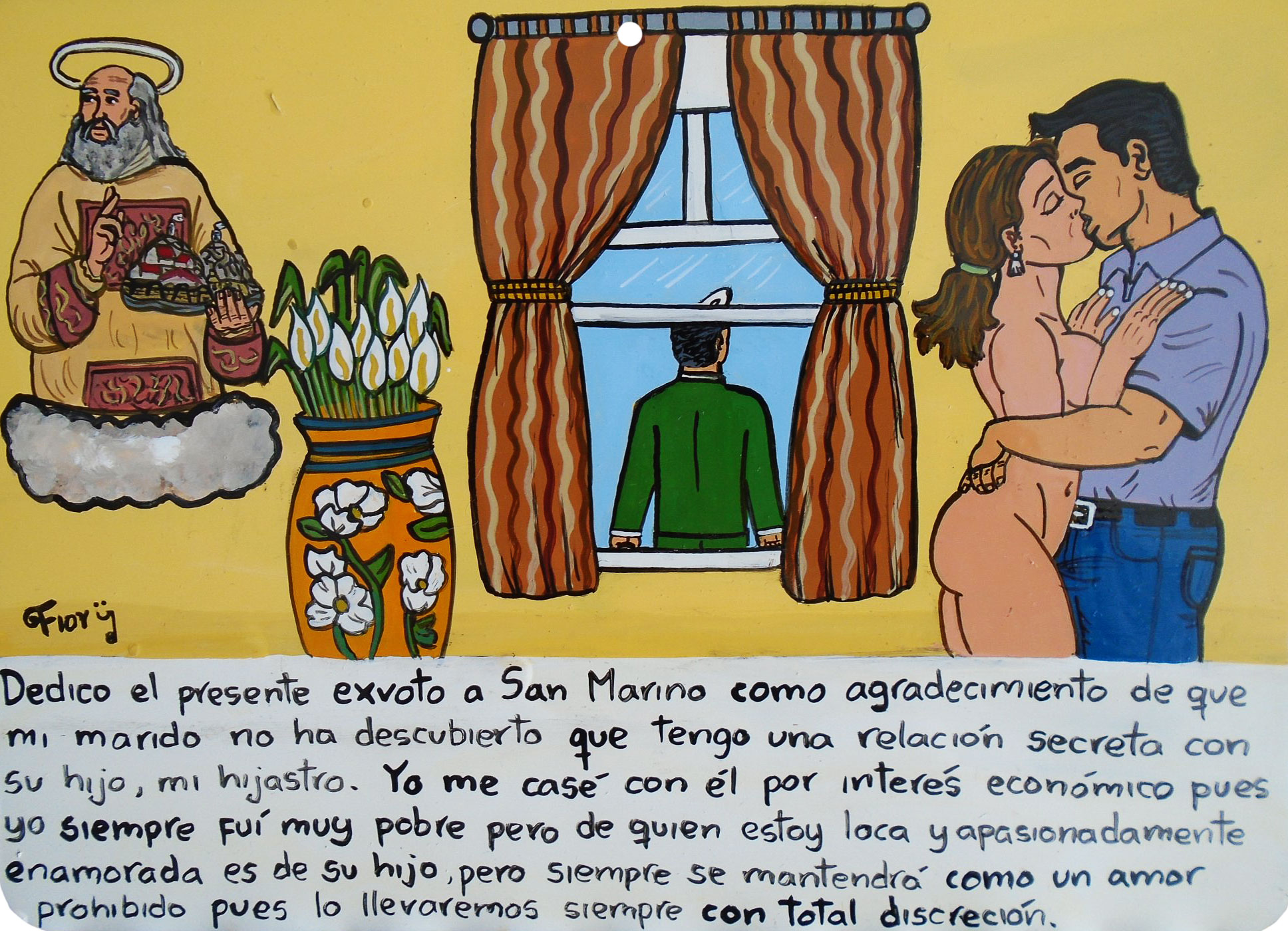 I dedicate the present exvoto to Saint Marinus in gratitude for my husband hasn’t found out about my secret relationship with his son—my step-son. I married for financial reasons because I was always poor. But it’s his son whom I madly and passionately in love with. Our love will always be forbidden, but we’ll cherish it with great discretion.

— tagged with Saint Marinus and husbands and wives, infidelity, love, love without frontiers, parents and children — # 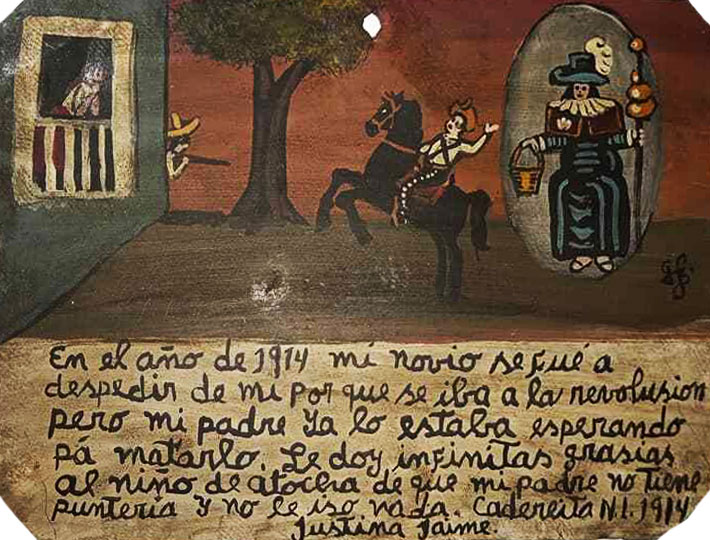 In 1914, my fiancé had to leave me because he was going to the revolution. But my father was waiting to kill him. I give infinite thanks to the Child of Atocha for my father is bad in aiming and he didn’t do anything to him. 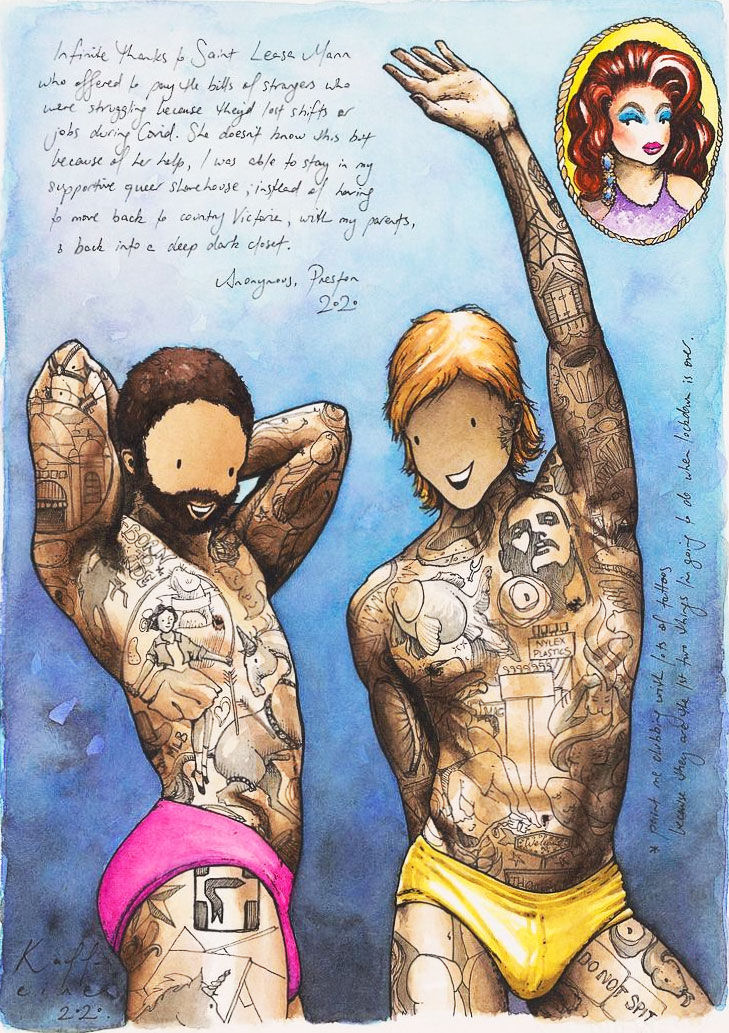 Infinite Thanks to Saint Leasa Mann, who offered to pay the bills of strangers who were struggling because they’d lost shifts or work during Covid. She doesn’t know this but because of her help, I was able to stay in my supportive queer sharehouse, instead of having to move back to country Victoria with my parents, & back into a deep dark closet.

Please paint me clubbing with lots of tattoos, because they are the first two things I’m going to do when lockdown is over. 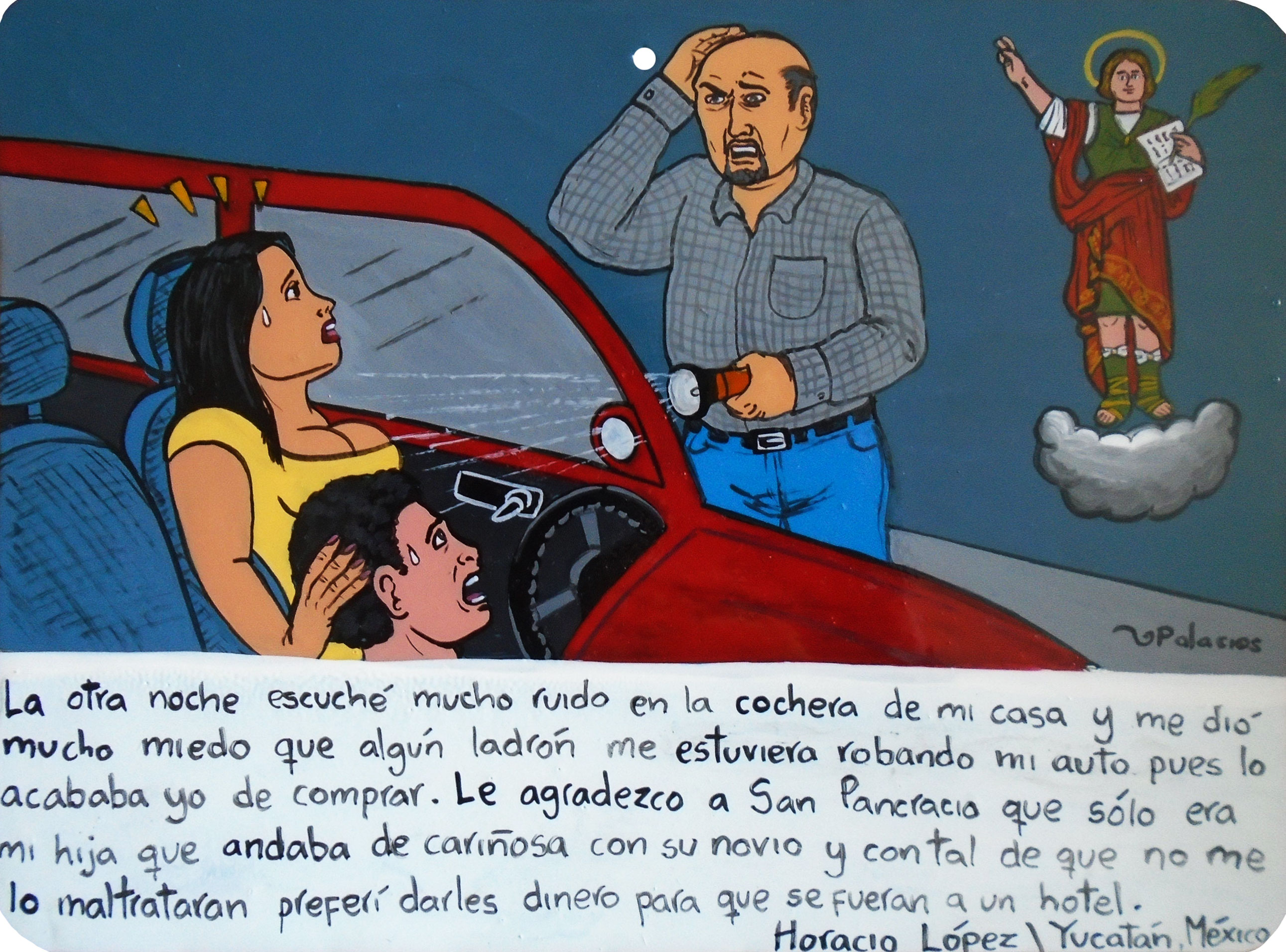 The other night, I heard a lot of noice out of my garage. I got very scared that it might be a thief stealing my car that I’d just bought. I thank Saint Pancras for it was only my daughter making out with her boyfriend. I didn’t want them ruin my car, so I preferred to give them money to go to a hotel.

— tagged with Saint Pancras and car, hotel, parents and children and Yucatán — # 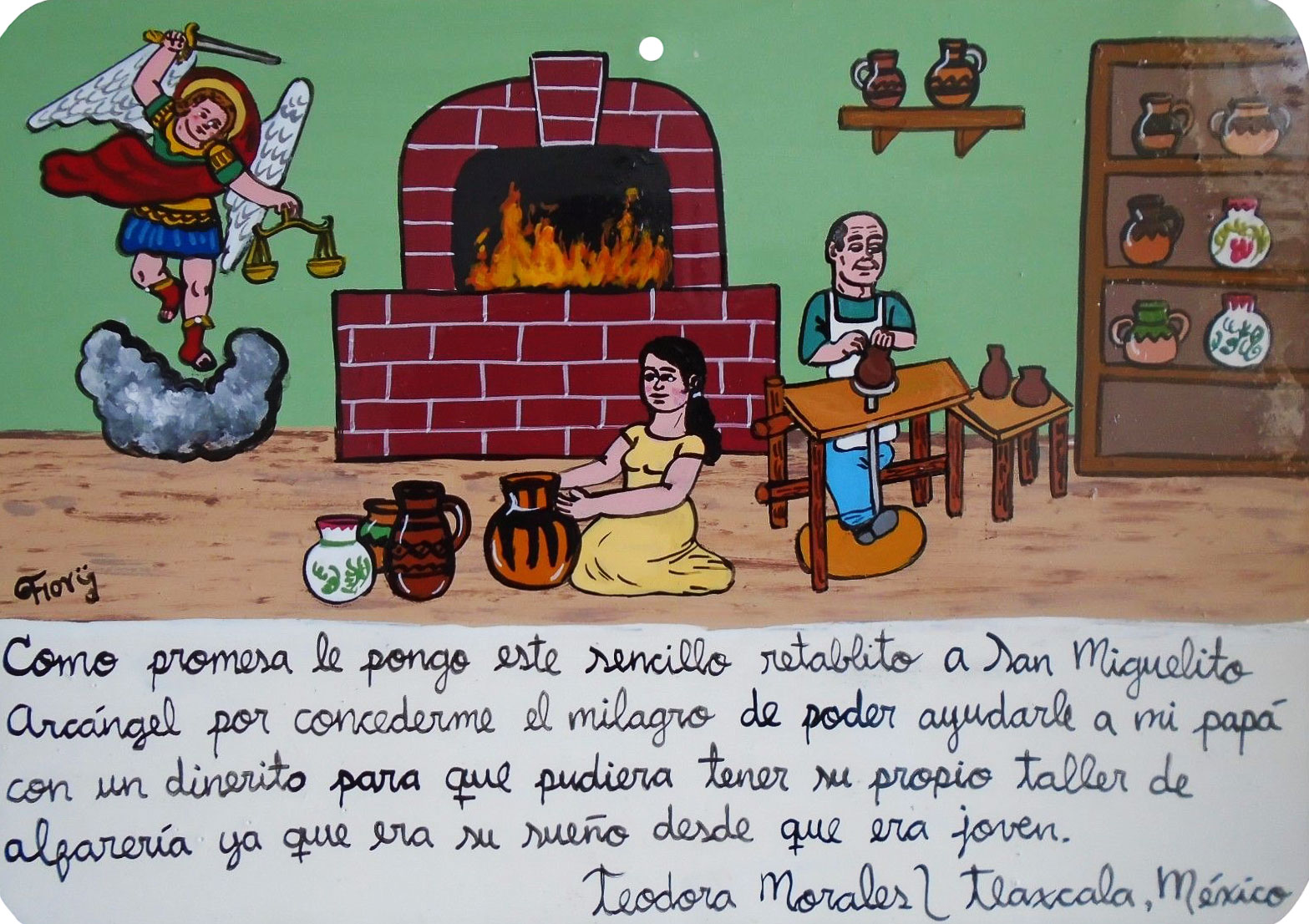 As I promised, I bring this humble retablo to Saint Michael the Archangel for granting me the miracle that I was able to help my father with money to open his pottery workshop because he dreamt about it since he was young.

— tagged with Saint Michael the Archangel and money, parents and children, potters, workshop and Tlaxcala — # 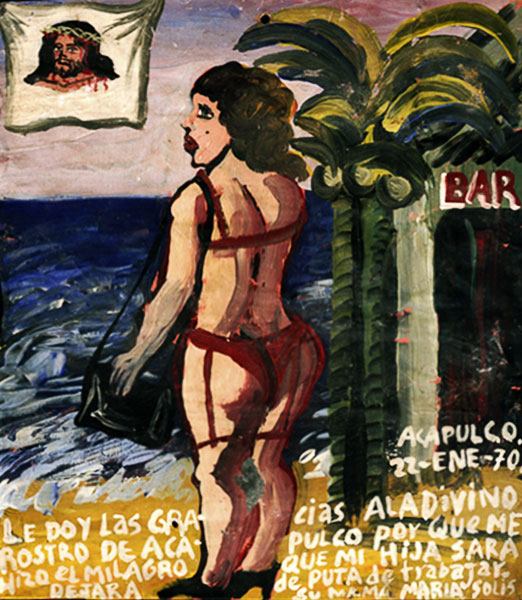 I thank the Holy Face of God from Acapulco for working a miracle that my daughter Sara stopped working as a prostitute.

— tagged with Holy Face of God and parents and children, prostitutes and Acapulco — # 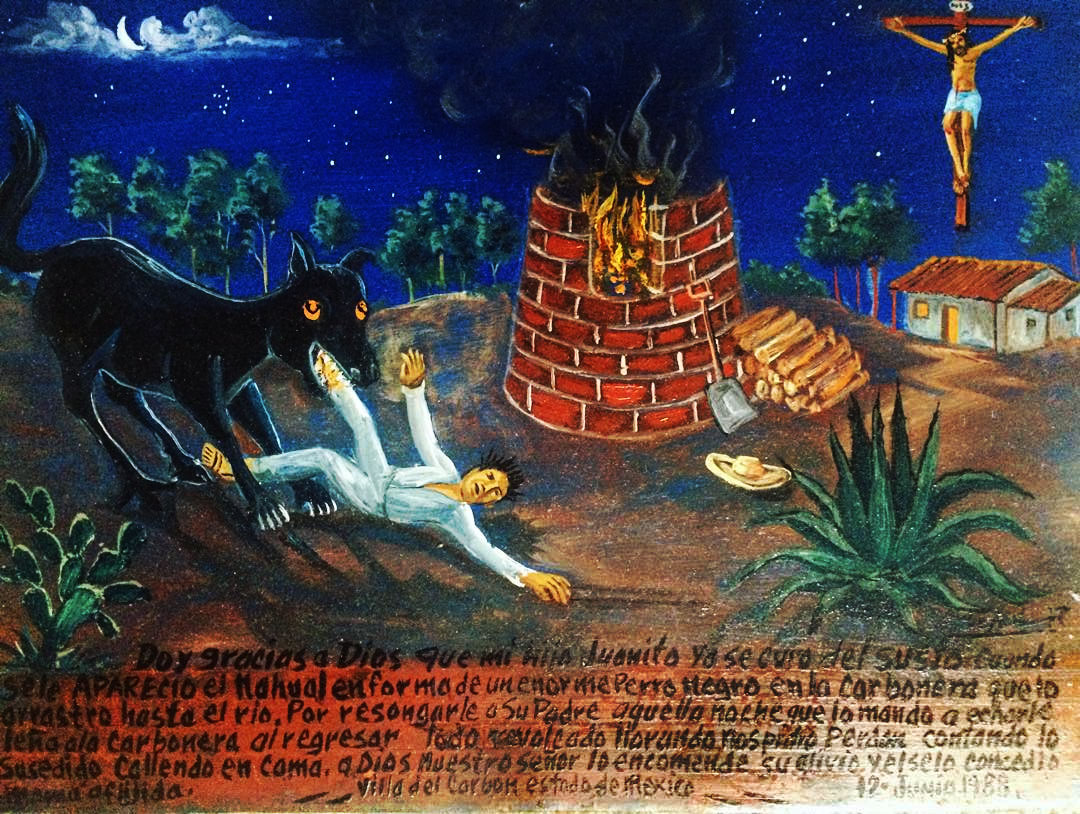 I thank God because my son Juanito has recovered from the fright he had when a nagual appeared to him in form of an enormous black dog near the coal tower for being rude to his father who sent him that night to put more woods to the coal tower. The dog dragged him till the river. When he came back, all wallowed and in tears, he asked us for forgiveness, telling everything that happened, and then fell into the bed. I entrust his recovery to Our Lord, and he granted my wish. 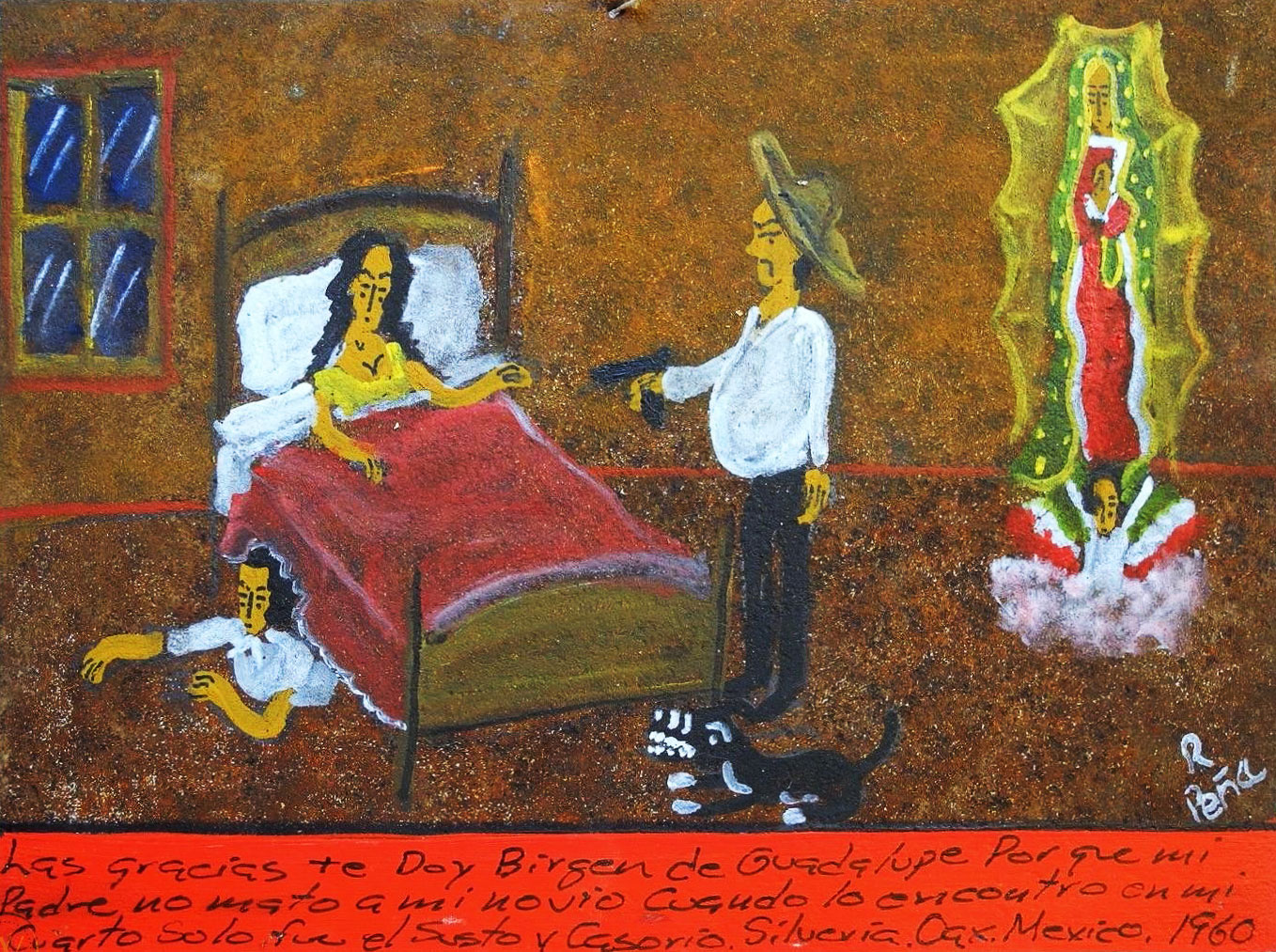 I thank you, Virgin of Guadalupe, because my father didn’t kill my boyfriend when he found him in my room. He got off with fright and marriage.

— tagged with Virgin of Guadalupe and bed, engagement, parents and children and Oaxaca — # 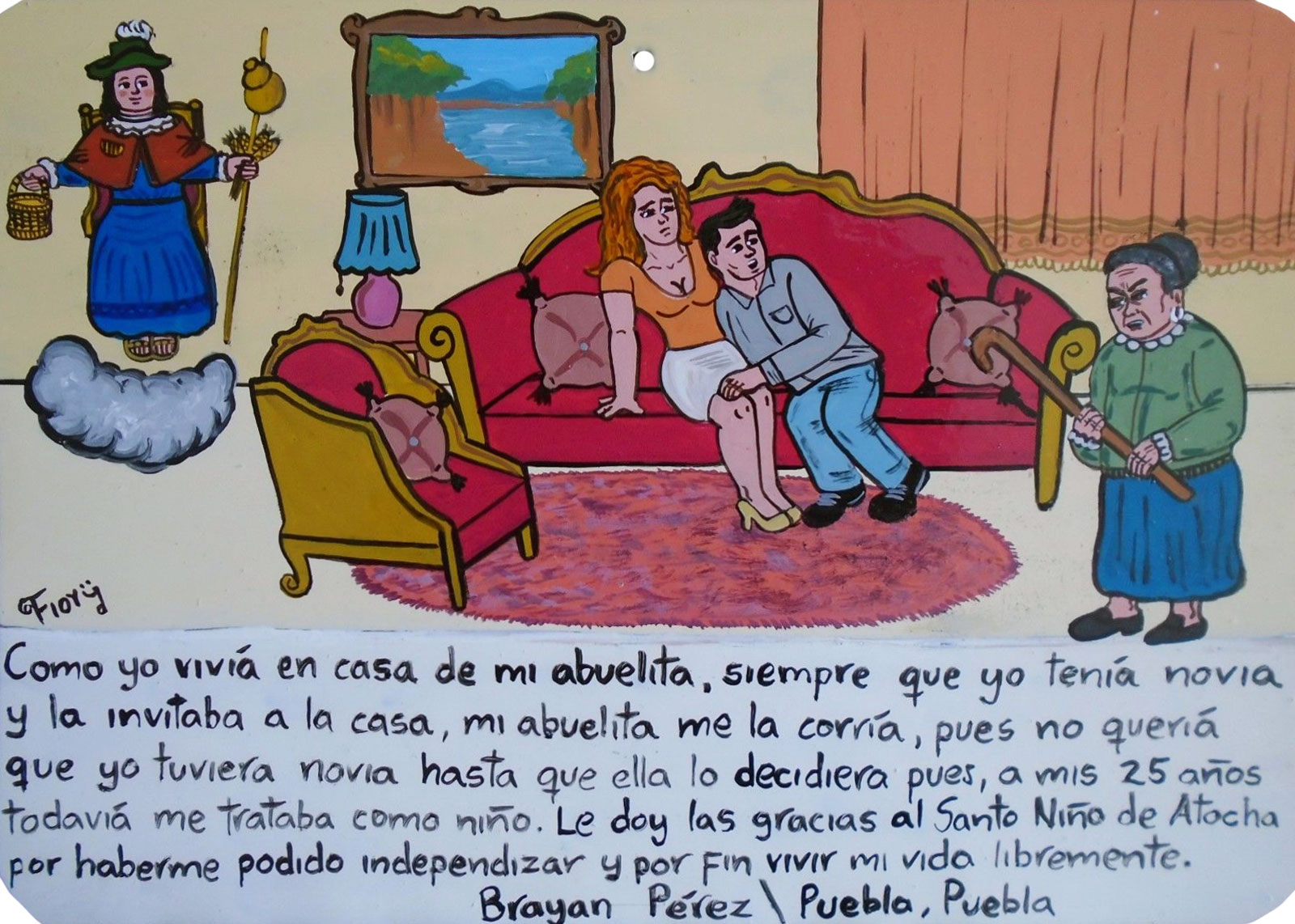 Since I lived in my grand-mommy’s house, whenever I had a girlfriend and invited her to the house, my grand-mommy would kick her out because she wouldn’t let me have girls until she decided so. In my 25, she treated me like a boy. I give thanks to the Holy Child of Atocha for I finally began to live alone and finally can live my life freely.

— tagged with Child of Atocha and dating, girls, old people, parents and children and Puebla — # 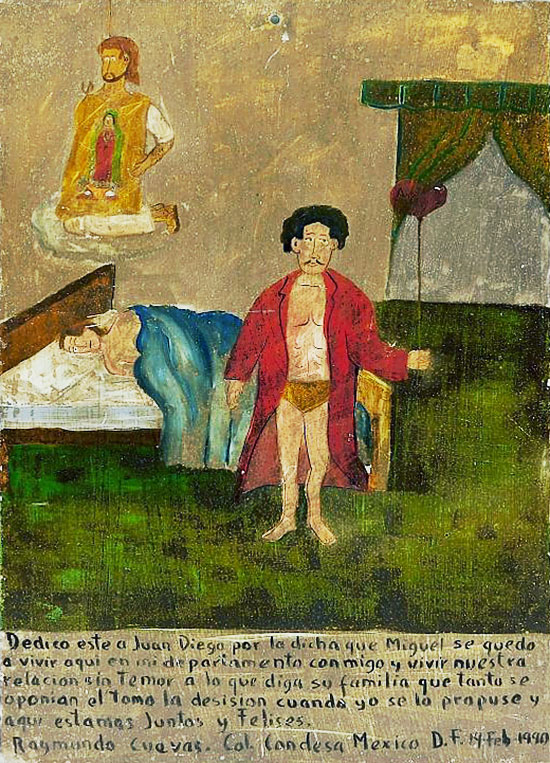 I dedicate this to Juan Diego because Miguel stayed in my apartment to live with me and go on with our relationship without being afraid what his family—which is very opposed to it—would say. He made his mind when I proposed him, and now we are happy together.