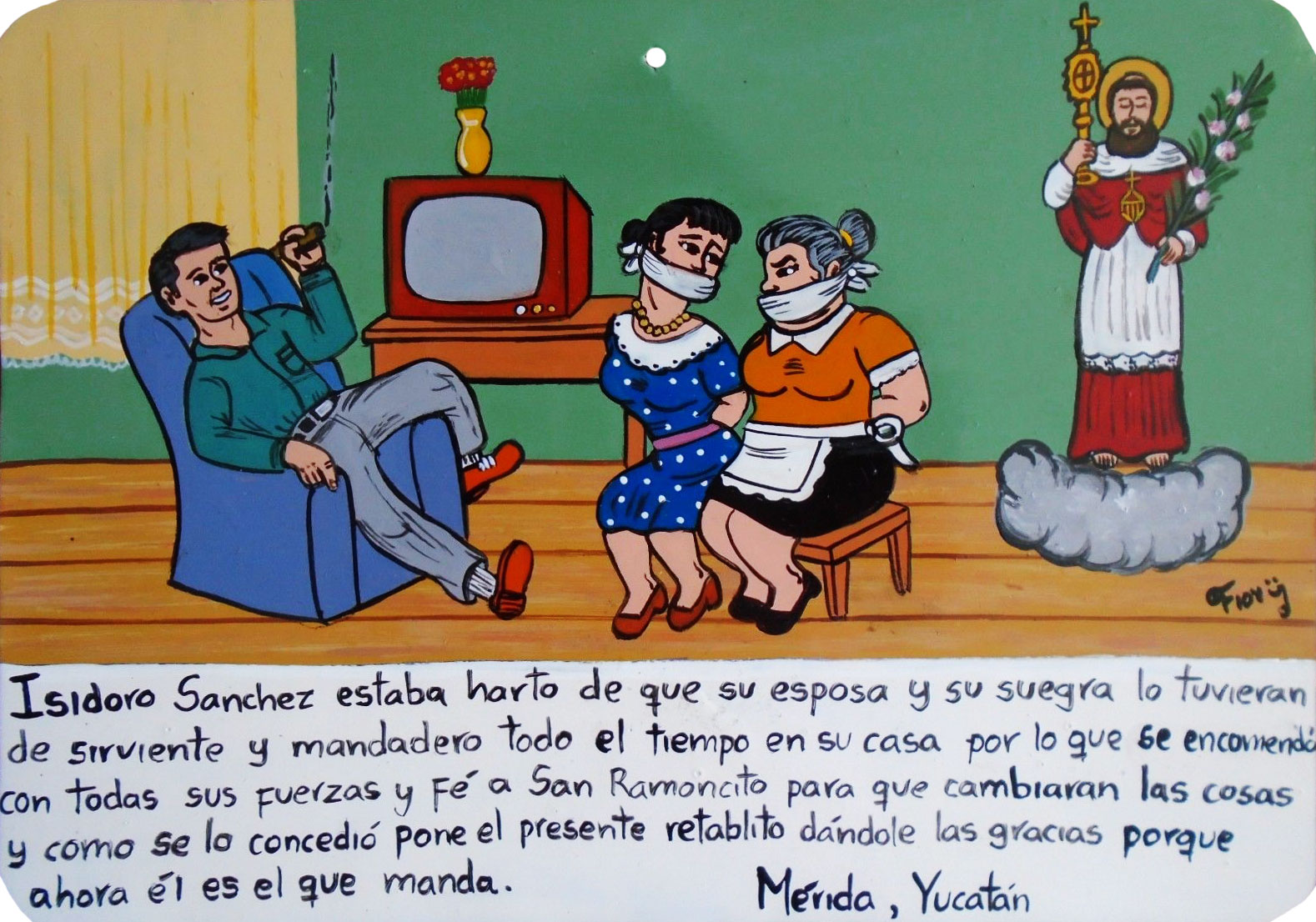 Isidoro Sanchez was sick and tired of his wife and mother-in-law treating him like a servant and commanding in his own house. That’s why he entrusted himself, with all his might and faith, to Saint Raymond so as the things would change. As he promised, he brings the present retablo giving thanks because now he’s the one in charge.

— tagged with Saint Raymond Nonnatus and husbands and wives, in-laws, parents and children and Merida, Yucatán — # 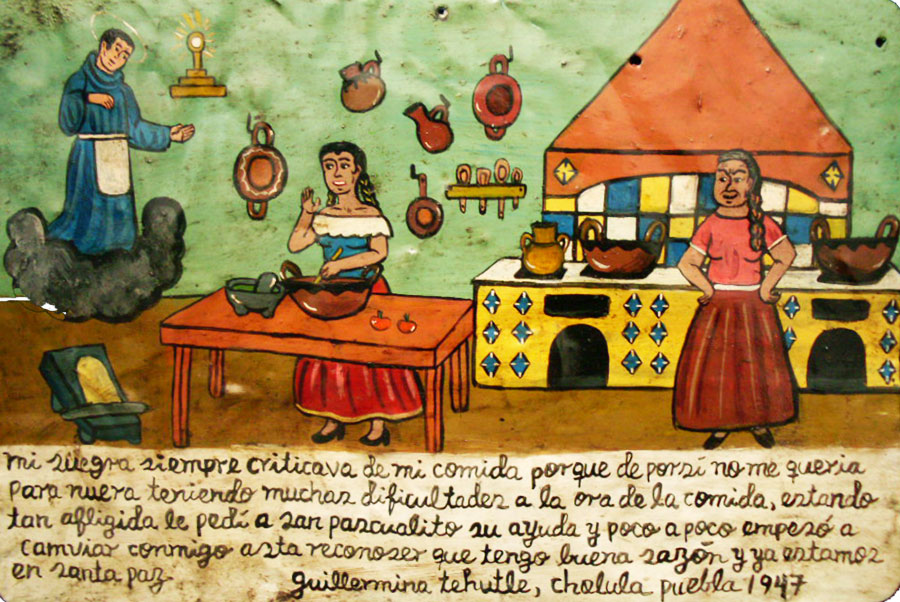 My mother-in-law always criticized my food because she didn’t like me as a daughter-in-law. It was very difficult for me when we were eating. I was in such despair so I entrusted myself to Saint Paschal. Little by little she changed her attitude towards me. Now she even admits that I cook very well, and there is peace among us now. 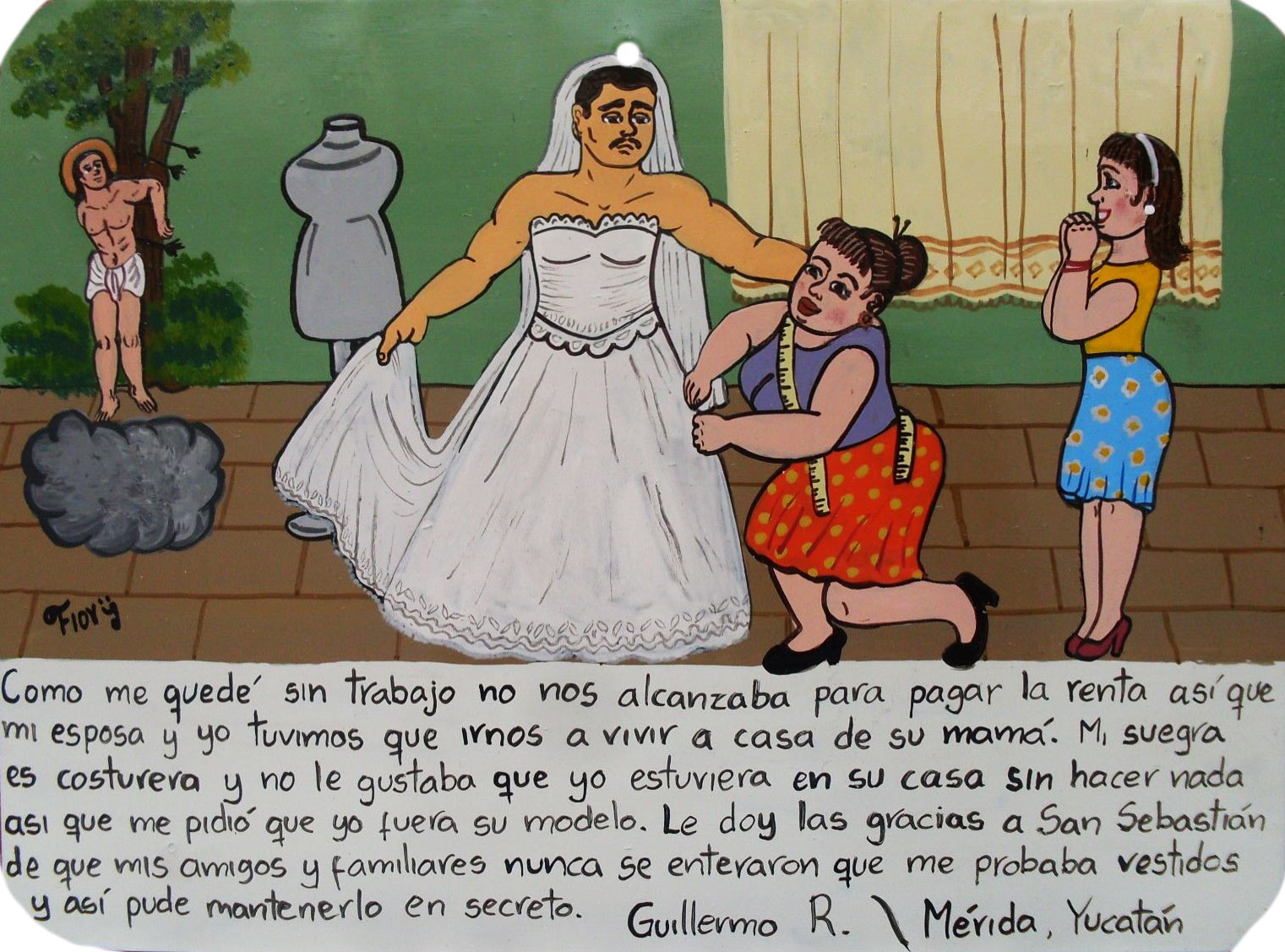 Since I lost my job and we didn’t have enough money to pay our rent, my wife and I had to move with her mother. My mother-in-law was a dressmaker, and she didn’t like that I stayed in her house doing nothing. So she asked me to be her model. I thank Saint Sebastian for my friends and relatives never found out that I was trying on dresses, so I kept it in secret. 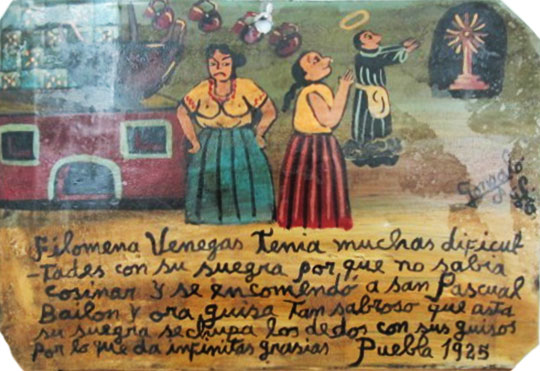 Filomena Venegas had difficulties with her mother-in-law because she didn’t know how to cook. She prayed to Saint Paschal Baylon, and now she cooks so delicious food, that even the mother-in-law licks her fingers after the meal. Filomena gives thanks for that. 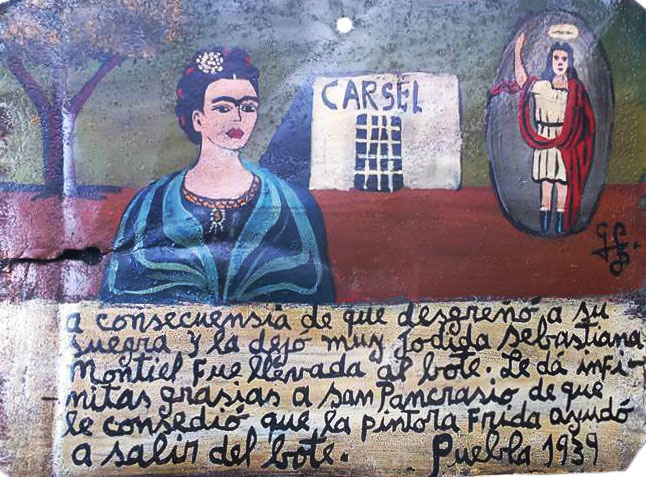 As a consequence of beating the fuck out of her mother-in-law Sebastiana Montiel was taken to the jail. She thanks Saint Pancras because the artist Frida helped her to go out of the jail. 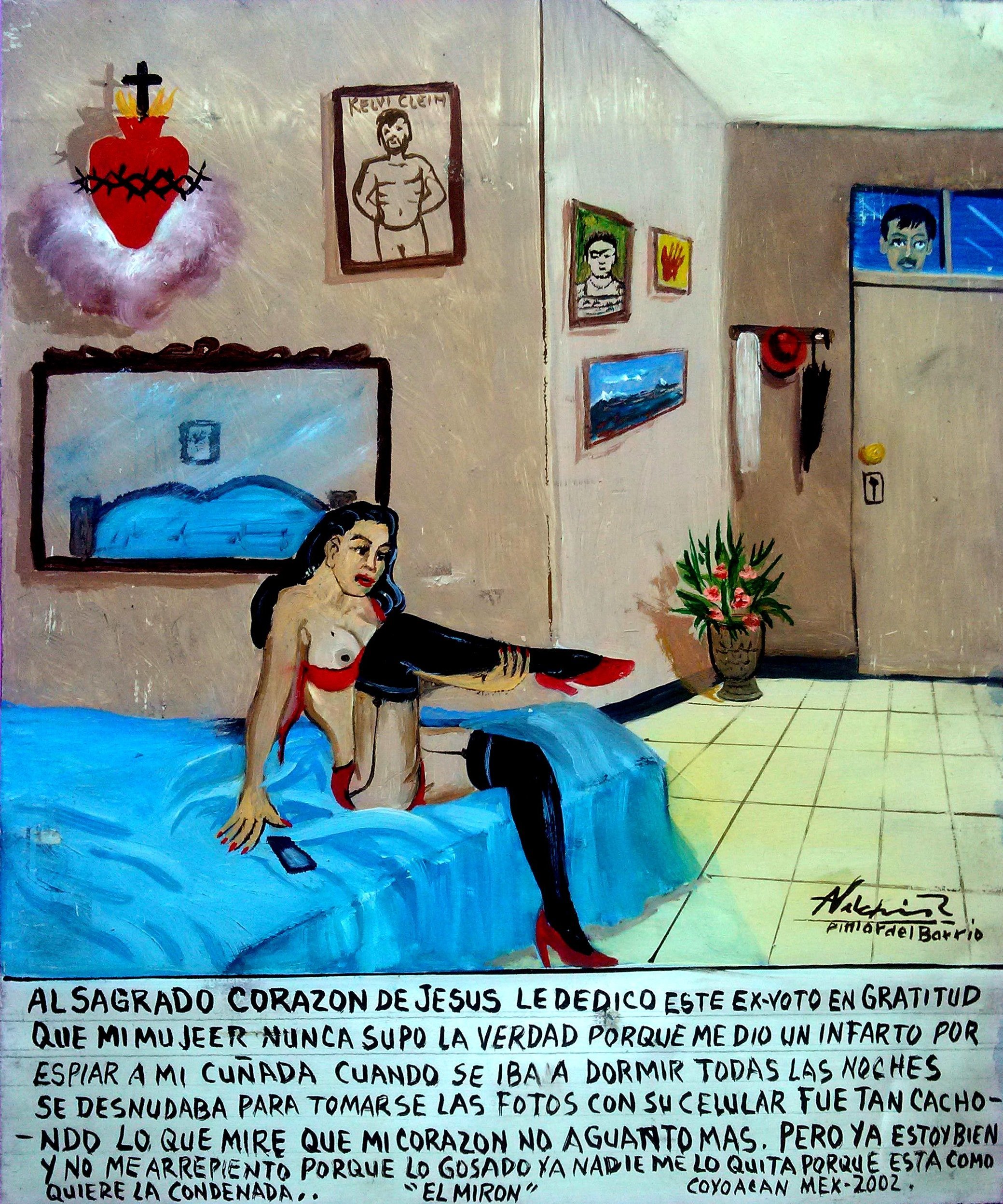 I dedicate this ex-voto to the Holy Heart of Jesus thanking for my wife never found out the truth why I had a heart attack. I used to spy at nights on my sister-in-law when she went to sleep. She stripped herself down and took photos with her phone. I was so turned on my heart couldn’t take it anymore. Now I’m fine, and I don’t regret. I enjoyed it all and no one will take it from me because this damn broad is hot. 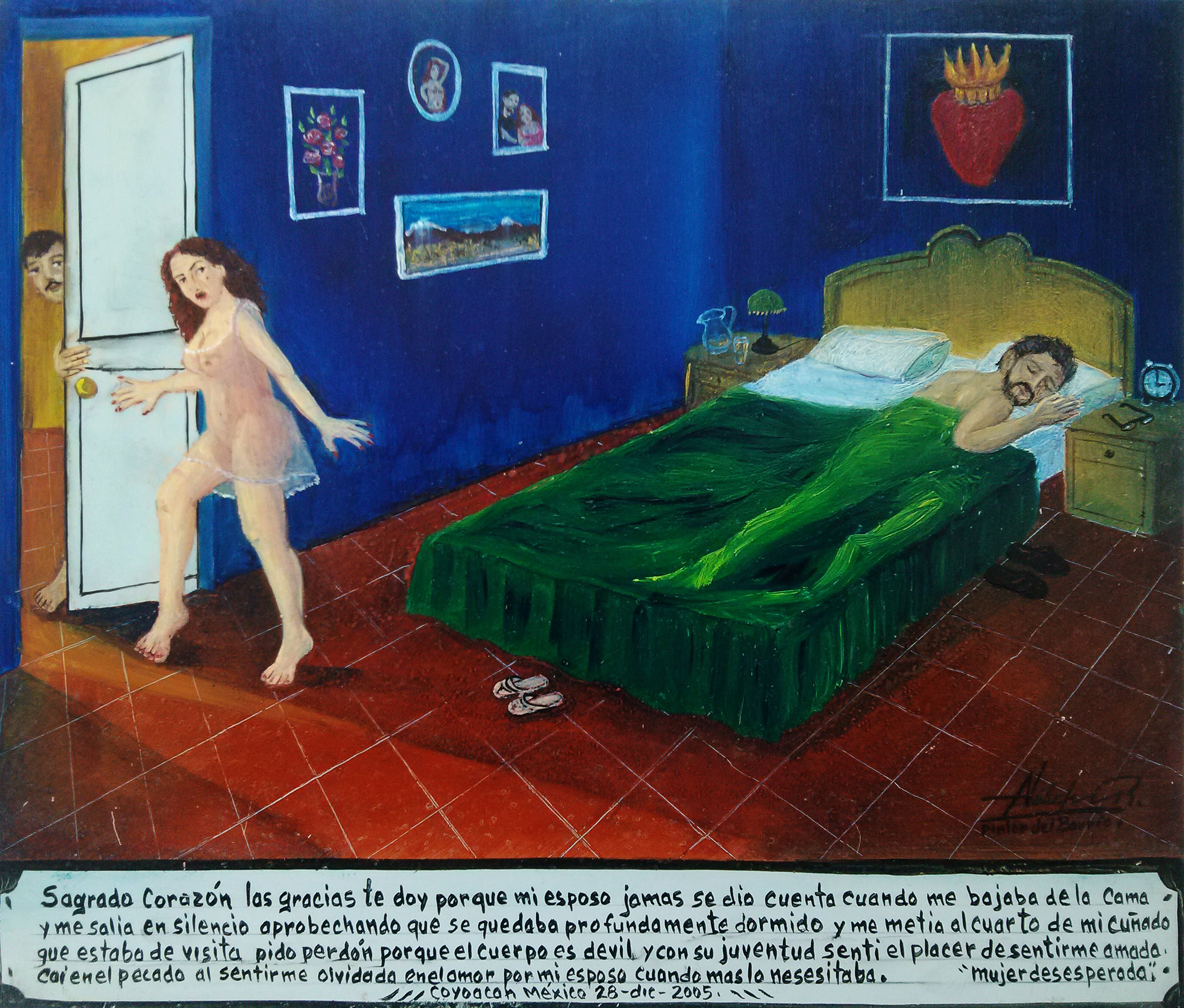 Holy Heart, I thank you because my husband never found out that I used to get out quietly from the bed while he was sleeping very deeply and went to my brother-in-law’s room when he was visiting us. I ask for forgiveness since the flesh is weak and his youth made me feel the pleasure of being loved again. I fell into the sin because I felt forgotten by my husband when I really needed the love. 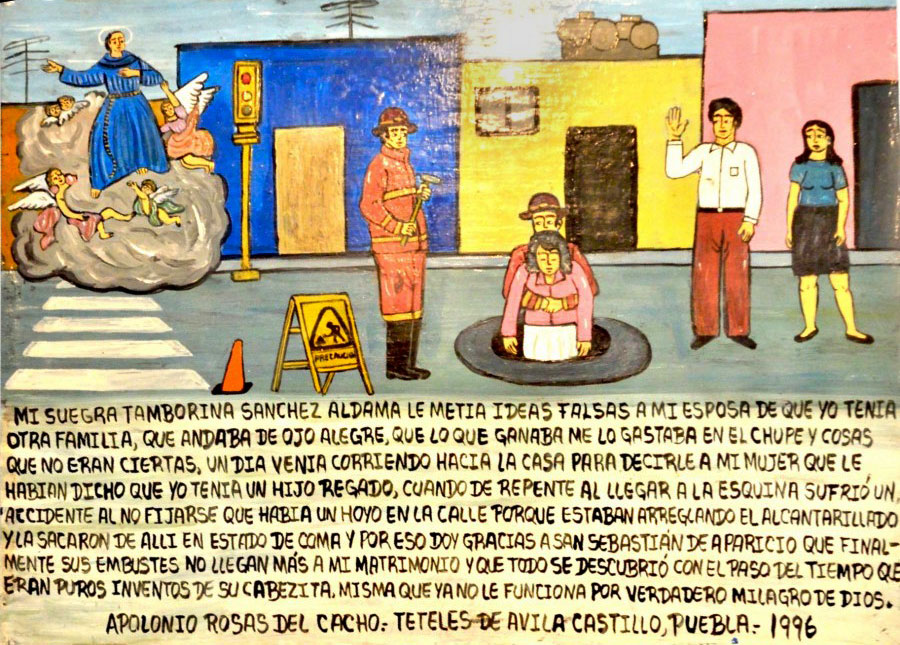 My mother-in-law Tamborina Sanchez Aldama used to put false ideas in my wife’s head. She was telling her that I might have another family, that I was flirting with other women, that I was spending all my money for booze, and other stupid things. One day she was in hurry to get to our house to tell my wife that I had a son on the side. But she had an accident at the corner. There were sewerage works going on and she didn’t notice an opened manhole which she fell into. She was in come when they got her out. I thank Saint Sebastian de Aparicio for that. Now her lies won’t ruin my marriage. Besides, everything she had been telling about me eventually turned out to be just fantasies in her head—which by a true miracle doesn’t function anymore. 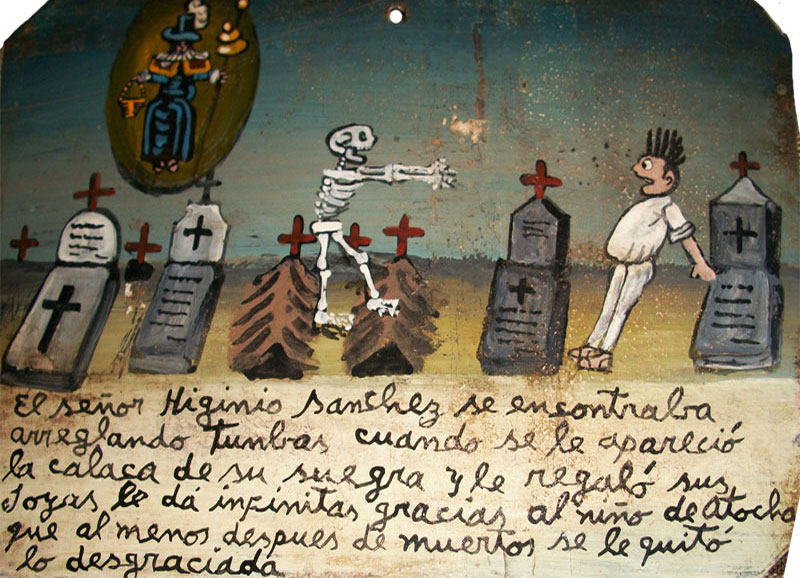 Higinio Snachez was taking care of the graves when suddenly the skeleton of his mother-in-wife appeared to him and gave him her jewelry. Higinio thanks the Holy Child of Atocha because his mother-in-law at least after dying stopped being a bitch. 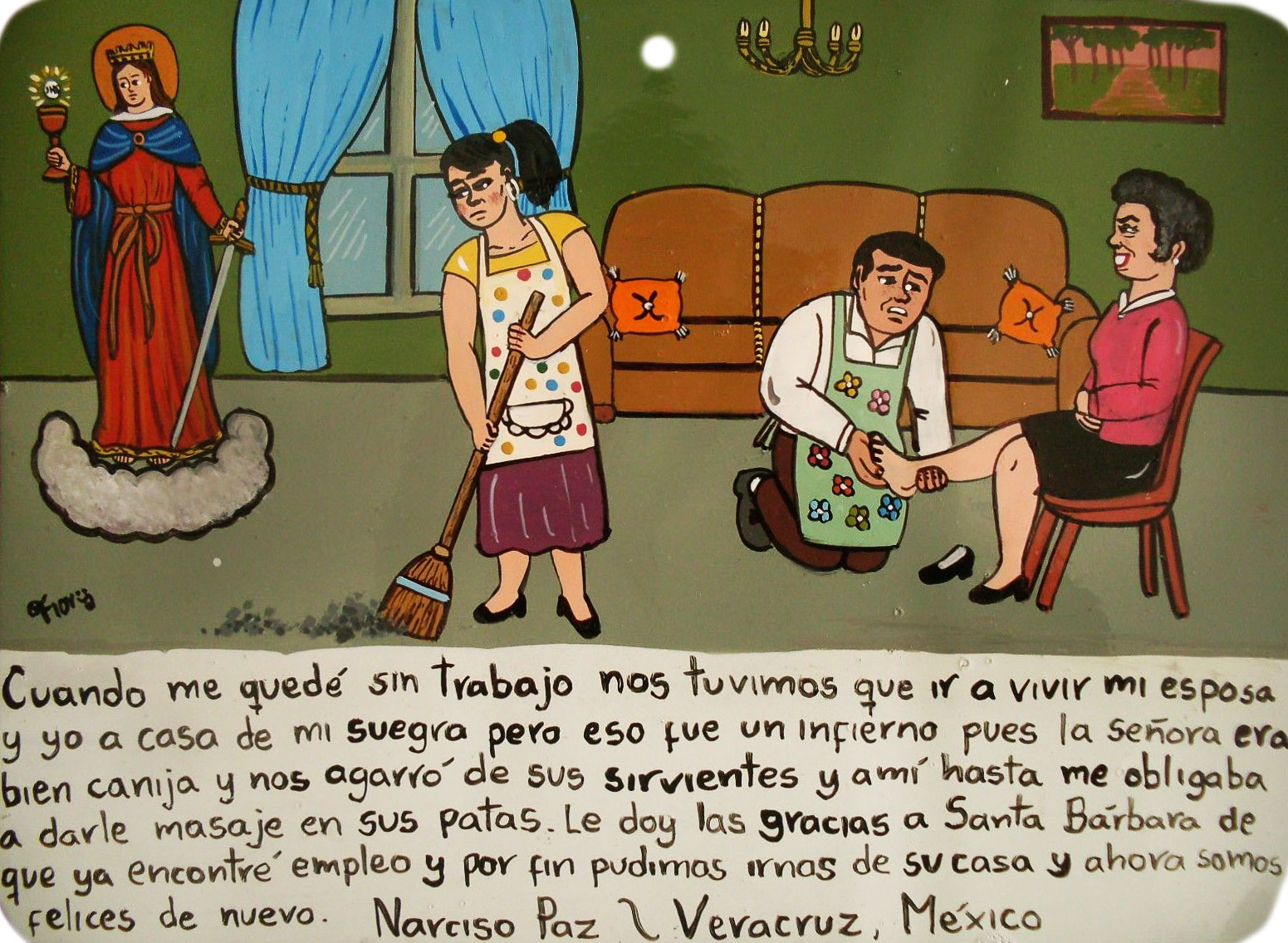 When I lost my job my wife and I had to move to my mother-in-law. It was a true hell because she was very mean—she kept us as her servants and even forced me to massage her feet. I thank Saint Barbara for I finally found a job and we moved out. Now we are happy again. 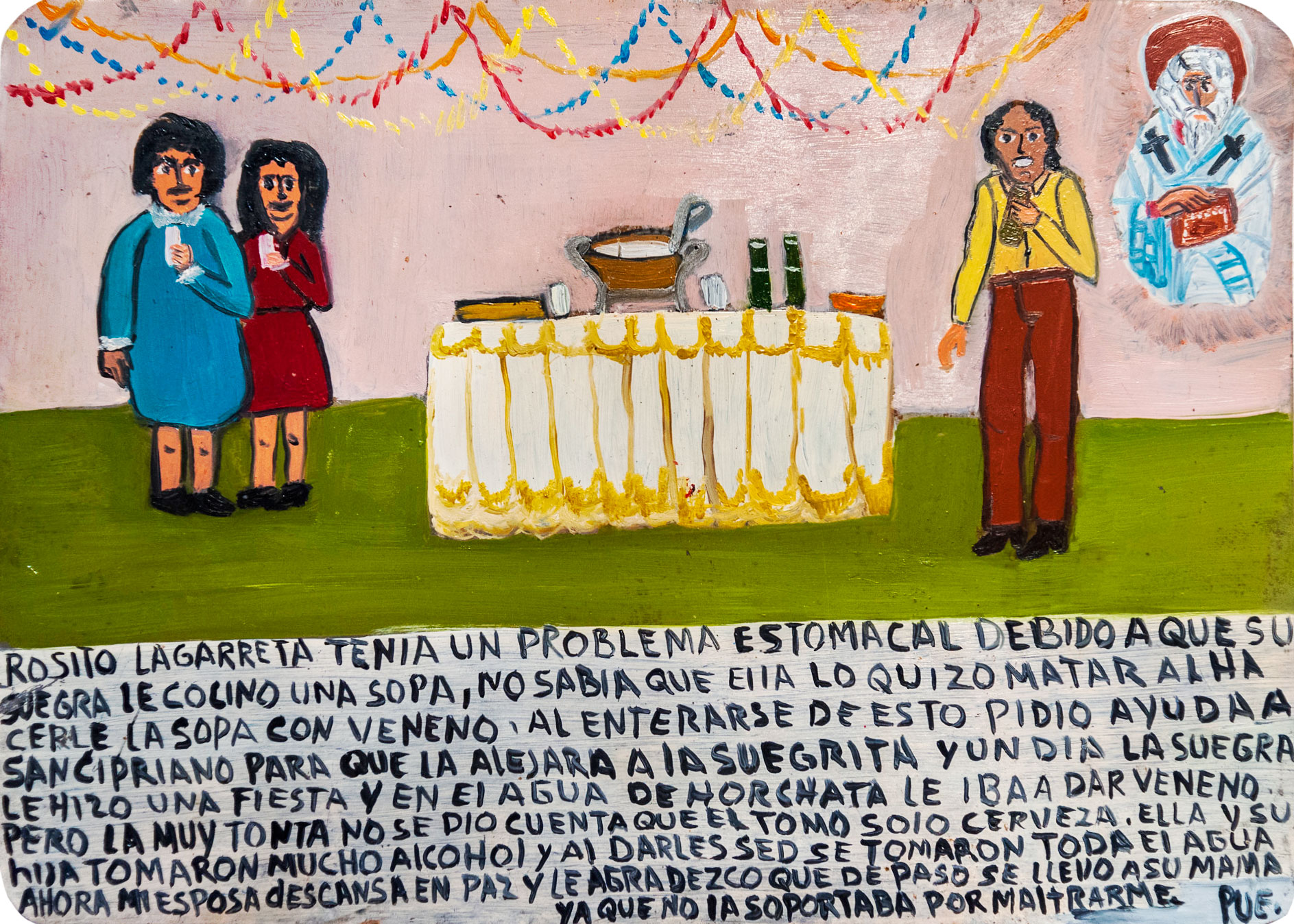 Rosito Lagaretta had a stomachache after eating his mother-in-law’s soup. He didn’t know she had tried to kill him and had poisoned the soup. When he found out about it, he asked Saint Cyprian for helping him get rid of his mother-in-law. One day she had a party and poisoned the orgeat syrup. But she was a fool to not know that Rosito doesn’t drink anything but beer. His mother-in-law and her daughter got drunk at the party and when they got thirsty they drank all the orgeat.

Now my wife rests in peace. I thank for her mother kicked the bucket alongside with her because I couldn’t stand her. She was treating me very badly. 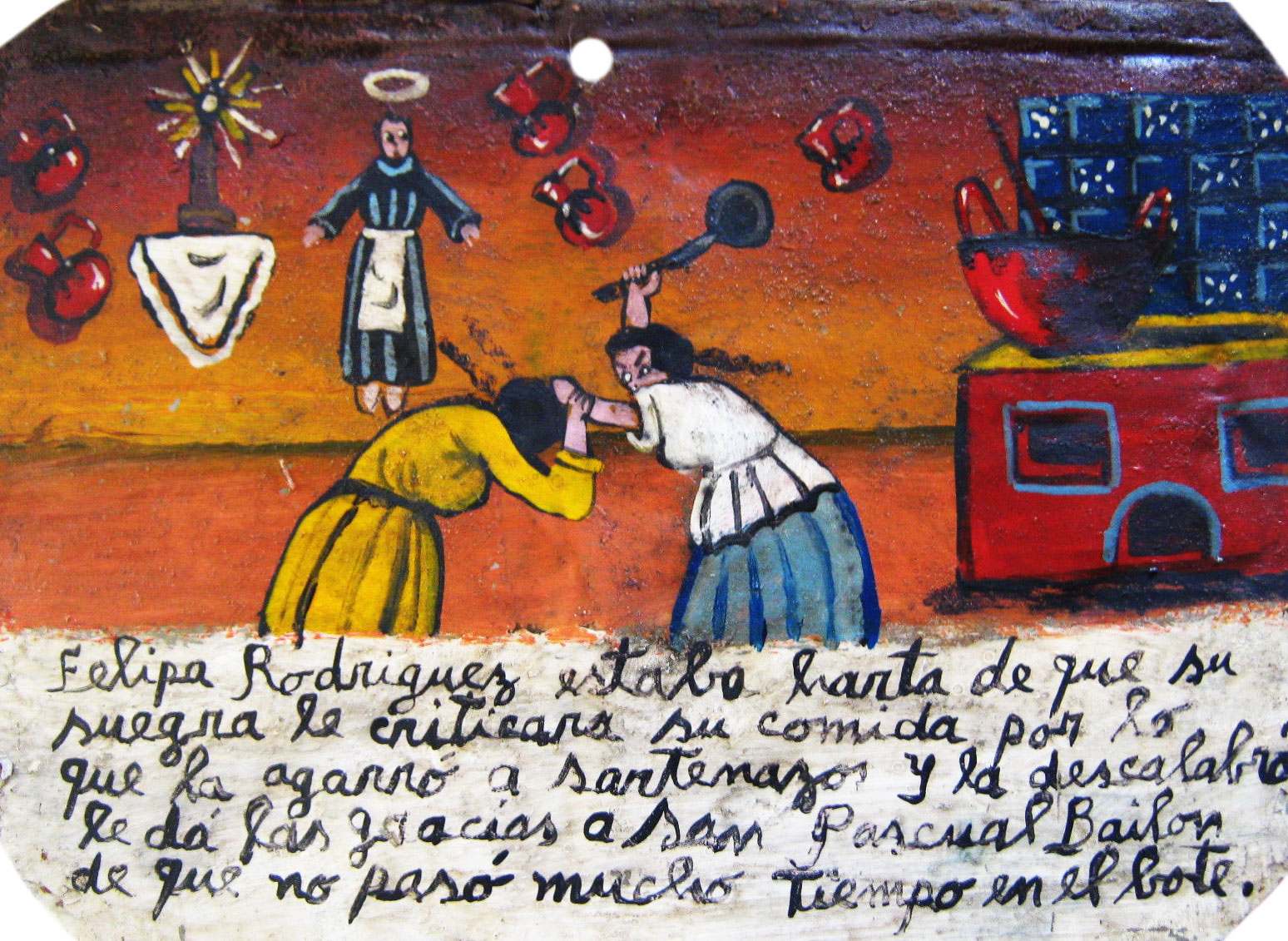 Felipe Rodriguez got tired of her food being constantly criticized by her mother-in-law. She blew her with a frying-pan and split her head open. Felipe thanks Saint Pascual Baylon for she didn’t stay in jail for a long time. 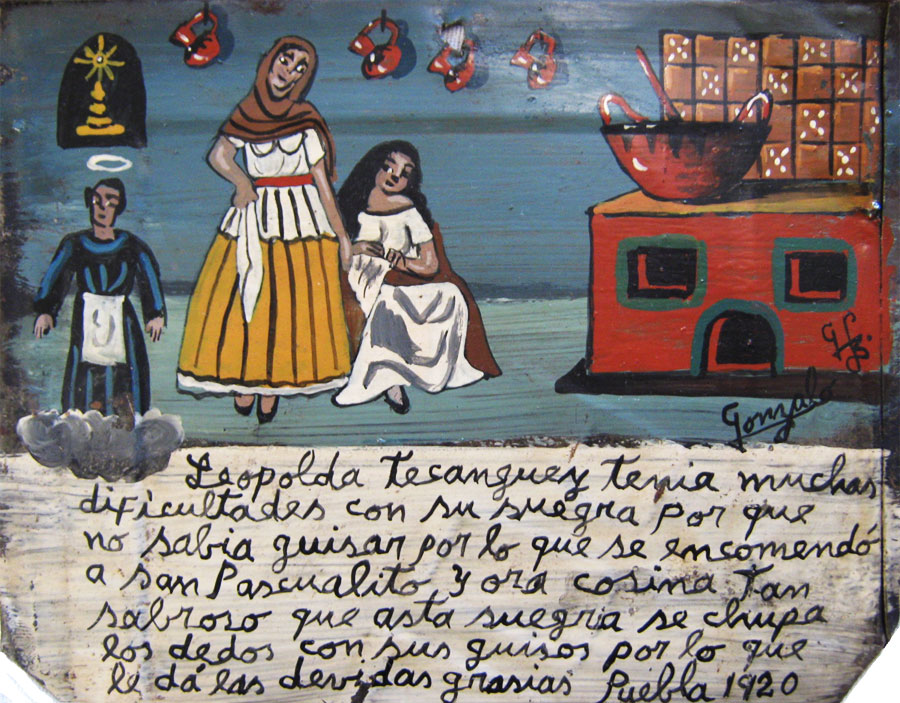 Leopolda Tecanguey had difficulties with her mother-in-law because she didn’t know how to cook. She prayed to Saint Paschal Baylon, and now she cooks so delicious, that her mother-in-law even licks her fingers after the meal. Leopolda thanks for that.